A thousand miles south of Hawaii, Palmyra Atoll is a sanctuary for species rarely seen elsewhere in the United States—and a challenge to biologists trying to restore it to its former glory 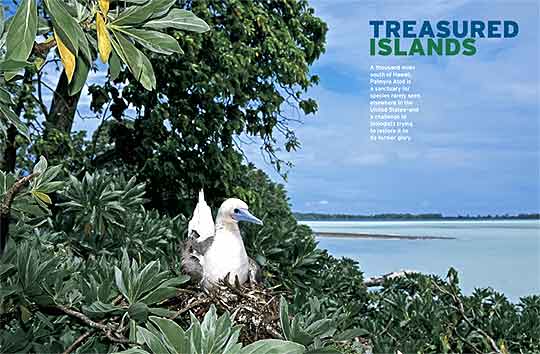 TINY SPECKS OF LAND a thousand miles southwest of Hawaii, Palmyra Atoll looks like the quintessential tropical island paradise, complete with coconut-fringed white-sand beaches, turquoise waters and not a single permanent human inhabitant. Along the islands' shores, majestic Pisonia trees rise up from the tide line, forming a luxuriant forest that shelters thousands of nesting red-footed boobies, magnificent frigatebirds, white-tailed tropicbirds, black noddies and white terns. Offshore, sea turtles and butterfly fish hover in warm, crystal-clear waters over a vibrant reef made up of some 130 species of coral.

Surprisingly, this far-flung Eden is part of the United States. As the most intact marine wilderness left in the U.S. tropics—and a haven for species found rarely, if ever, elsewhere in the nation—Palmyra also is a top priority for scientists working to restore the islands to the nearly pristine condition they were in before the U.S. Navy arrived during World War II.

To make room for an airbase during the war, Navy personnel enlarged some of the atoll's existing islands and created new ones by blasting and dredging the reef, then crushing and piling up corals. In addition, they built runways, connected islets and dug a channel to allow large ships to enter the sheltered lagoon. When the war ended, all 6,000 servicemen stationed on Palmyra Atoll left—but the hordes of nonnative rats, insects and plants they had inadvertently brought with them were left behind. 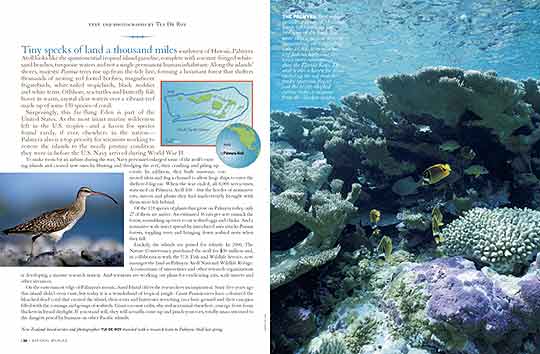 Of the 110 species of plants that grow on Palmyra today, only 27 of them are native. An estimated 36 rats per acre ransack the forest, scrambling up trees to eat seabird eggs and chicks. And a nonnative scale insect spread by introduced ants attacks Pisonia forests, toppling trees and bringing down seabird nests when they fall.

Luckily, the islands are poised for rebirth. In 2000, The Nature Conservancy purchased the atoll for $30 million and, in collaboration with the U.S. Fish and Wildlife Service, now manages the land as Palmyra Atoll National Wildlife Refuge. A consortium of universities and other research organizations is developing a marine research station. And scientists are working out plans for eradicating rats, scale insects and other invasives.

On the easternmost edge of Palmyra's mosaic, Sand Island offers the researchers an inspiration. Sixty-five years ago this island didn't even exist, but today it is a wonderland of tropical jungle. Giant Pisonia trees have colonized the bleached dead coral that created the island, their roots and buttresses stretching over bare ground and their canopies filled with the comings and goings of seabirds. Giant coconut crabs, shy and nocturnal elsewhere, emerge from ferny thickets in broad daylight. If you stand still, they will actually come up and pinch your toes, totally unaccustomed to the dangers posed by humans on other Pacific islands. 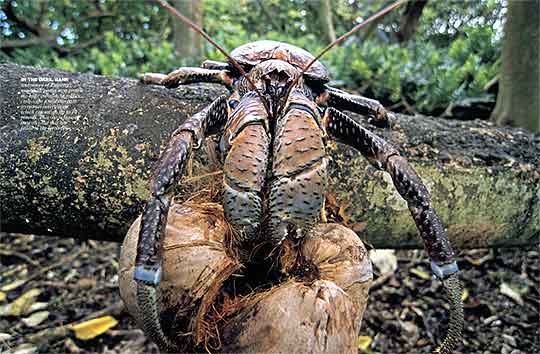