Autumn Beauties for the Garden

Fall-blooming native plants offer food for wildlife and a feast for the eyes; no matter where in the country you live, there are good species to choose from 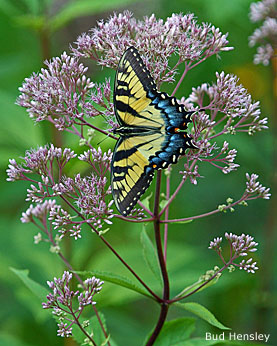 Planting goldenrod in your garden, along with other fall-blooming native perennials, can turn your backyard into a wildlife mecca every autumn. And, best of all, you don't have to worry about allergies. "Goldenrod doesn't cause hay fever," says Kim Todd, a University of Nebraska professor and extension horticultural specialist. The heavy, sticky pollen of goldenrod clings to the insects that pollinate it, she explains. Ragweed, which blooms at the same time and has light, windborne pollen, is the real cause of sniffles and sneezes.

Goldenrod's only drawback is aggressiveness—some species are rapid colonizers—but a number of varieties have now been tamed for the garden. In eastern states, Mark Sellew, owner of Pride's Corner Farms in Lebanon, Connecticut, recommends growing a cultivar of rough-stemmed goldenrod called "Fireworks." Monarchs make a beeline for it, he says, and it produces a lot of seeds for songbirds.

Stiff goldenrod is a good species to try in the prairie states, according to Todd. This 3- to 5-foot plant thrives in poor soil and is tolerant of drought. Farther west, southern goldenrod is a possibility, especially for moist areas.

If you live in the eastern two-thirds of the country, ironweed and joe-pye weed also make excellent additions to your fall garden. On the Great Plains, "our best butterfly magnet is joe-pye weed," says Todd. Reaching 5 to 7 feet tall with mauve flowers, joe-pye weed pulls in gulf fritillaries and several kinds of swallowtail butterflies (eastern tiger swallowtail, above). It grows in moist areas but will adapt to the drier conditions found in most backyards. All species, including spotted joe-pye weed, are native to North America.

Ironweed, which begins sprouting purple flowers in late summer and continues to bloom into the fall, is another attractive butterfly plant. Sparrows and goldfinches devour its seeds. New York ironweed is the most common species in the East. Western ironweed is found across the Great Plains to the foothills of the Rockies.

Widespread, with more than 150 native species, asters also attract both butterflies and songbirds, as well as native bees. They are the larval food plant for several orange-and-black butterflies called crescents. In addition, a number of western checkerspots lay their eggs on asters, and Harris's checkerspot, found in wet areas of the Northeast, only deposits its eggs on the flat-topped white aster.

In the northern states, Sellew advises trying New England aster. In the Midwest, Todd recommends a cultivar of Fendler's aster called "My Antonia."

"I use great northern aster quite a bit," says Oregon landscape architect Gretchen Vadnais. It grows in moist areas from Alaska south to Oregon and eastward to Montana. Because some asters can overrun your yard, Vadnais recommends doing a little homework before you plant a new variety. Stick to flowers that are native to your section of the country. They are less likely to get out of hand and are also adapted to local conditions.

Autumn perennials are especially valuable to wildlife when you let at least some of the plants go to seed, says Todd. "If you can keep them standing during the winter, it gives you the best opportunity to provide food for different kinds of birds." Small mammals such as white-footed mice and meadow voles will also partake. And any seeds missed by animals will fall to the ground, perhaps to germinate and give you even more fall flowers the following year.

South Carolinian Doreen Cubie is the owner of Certified Wildlife Habitat™ #34426. Learn more about native plants and gardening for wildlife.