Traversing remote Himalayan forests, the author tracks down a near mythical mammal in Bhutan 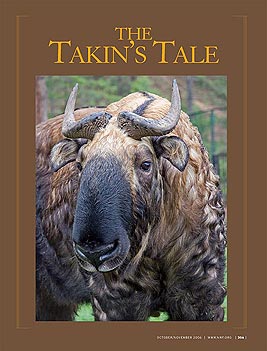 I'M SEARCHING for one of the world's least known land mammals: a hairy, hoofed herbivore with hunched shoulders, a short, thick neck and a large, broad face with small ears, a bulbous nose and backward-facing horns. Extremely elusive, it dwells in the dense forests of a remote Himalayan kingdom where, despite its size and bulk, it can bound up steep slopes with the agility and grace of an antelope.

The animal I am seeking is the Bhutan takin, Budorcas taxicolor whitei, one of four subspecies of takins found in Asia. I first laid eyes on this odd creature outside Thimphu, Bhutan's capital, where a preserve holds a handful of captive takins that have wandered into towns in search of food, made a nuisance of themselves and become too habituated to humans for their own good. The animal entranced me, and I was determined to see it in the wild. Few people have.

The takin is the stuff of myth. In Bhutan, the animal is revered, its origin attributed to the folk hero Drukpa Kunley. Legend has it that in the 16th century this Tantric master was asked by followers to perform a miracle at the end of a feast. Drukpa Kunley took a heap of cow and goat bones and reassembled them into a new animal--essentially grafting the head of a goat onto the body of a cow.

The British naturalist who first identified the takin for Western science never actually saw one alive. In Nepal during the mid-19th century, local hunters brought Brian Houghton Hodgson a takin skin, describing and drawing the animal for him. But with no way of observing its behavior himself, Hodgson was baffled about where to place the creature on the tree of life. Did it belong in the wild goat, bighorn sheep or antelope family? His confusion is reflected in the scientific name he gave the species: Budorcas taxicolor, which means "oxlike gazelle, badger-colored." The puzzle continues to this day. 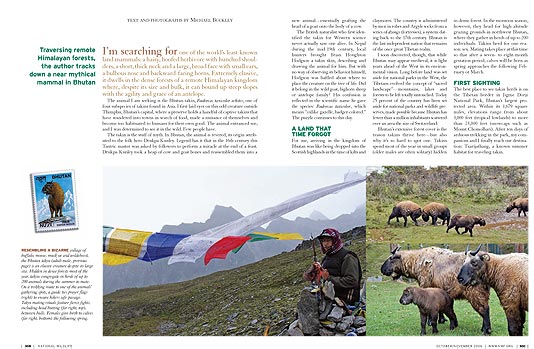 A Land That Time Forgot
For me, arriving in the kingdom of Bhutan was like being dropped into the Scottish highlands in the time of kilts and claymores. The country is administered by men in robes and Argyle socks from a series of dzongs (fortresses), a system dating back to the 17th century. Bhutan is the last independent nation that remains of the once great Tibetan realm.

I soon discovered, though, that while Bhutan may appear medieval, it is light years ahead of the West in its environmental vision. Long before land was set aside for national parks in the West, the Tibetans evolved the concept of "sacred landscape"--mountains, lakes and forests to be left totally untouched. Today 25 percent of the country has been set aside for national parks and wildlife preserves, made possible because Bhutan has fewer than a million inhabitants scattered over an area the size of Switzerland.

Bhutan's extensive forest cover is the reason takins thrive here--but also why it's so hard to spot one. Takins spend most of the year in small groups (older males are often solitary) hidden in dense forest. In the monsoon season, however, they head for high-altitude grazing grounds in northwest Bhutan, where they gather in herds of up to 200 individuals. Takins herd for one reason: sex. Mating takes place at this time so that after a seven- to eight-month gestation period, calves will be born as spring approaches the following February or March.

First Sighting
The best place to see takin herds is on the Tibetan border in Jigme Dorji National Park, Bhutan's largest protected area. Within its 1,679 square miles, elevations range from about 3,000 feet (tropical lowlands) to more than 23,000 feet (snowcaps such as Mount Chomolhari). After ten days of arduous trekking in the park, my companions and I finally reach our destination: Tsarijathang, a known summer habitat for traveling takin. 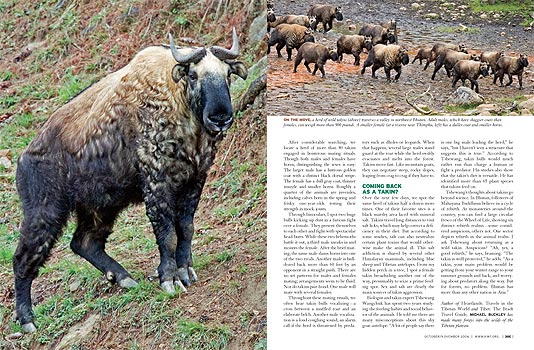 After considerable searching, we locate a herd of more than 40 takins engaged in boisterous mating rituals. Though both males and females have horns, distinguishing the sexes is easy: The larger male has a lustrous golden coat with a distinct black dorsal stripe. The female has a dull gray coat, thinner muzzle and smaller horns. Roughly a quarter of the animals are juveniles, including calves born in the spring and frisky one-year-olds testing their strength in mock-jousts.

Through binoculars, I spot two huge bulls kicking up dust in a furious fight over a female. They present themselves to each other and fight with spectacular head-butts. While these two behemoths battle it out, a third male sneaks in and mounts the female. After the brief mating, the same male slams horns into one of the two rivals. Another male is bulldozed back more than 60 feet by an opponent in a straight push. There are no set patterns for males and females mating; arrangements seem to be fluid. Nor do takins pair-bond. One male will mate with several females.

Throughout these mating rituals, we often hear takin bulls vocalizing--a cross between a muffled roar and an elaborate belch. Another male vocalization is a loud coughing sound, an alarm call if the herd is threatened by predators such as dholes or leopards. When that happens, several large males stand guard at the rear while the herd swiftly evacuates and melts into the forest. Takins move fast. Like mountain goats, they can negotiate steep, rocky slopes, leaping from crag to crag if they have to.

Coming Back as a Takin?
Over the next few days, we spot the same herd of takins half a dozen more times. One of their favorite sites is a black marshy area laced with mineral salt. Takins travel long distances to visit salt licks, which may help correct a deficiency in their diet. But according to some studies, salt can also neutralize certain plant toxins that would otherwise make the animal ill. This salt addiction is shared by several other Himalayan mammals, including blue sheep and Tibetan antelopes. From my hidden perch in a tree, I spot a female takin broadsiding another out of the way, presumably to seize a prime feeding spot. Sex and salt are clearly the main sources of takin aggression.

Biologist and takin expert Tshewang Wangchuk has spent two years studying the feeding habits and social behavior of the animals. He told me there are many misconceptions about this shy goat-antelope: "A lot of people say there is one big male leading the herd," he says, "but I haven't seen a structure that suggests this is true." According to Tshewang, takin bulls would much rather run than charge a human or fight a predator. His studies also show that the takin's diet is versatile. He has identified more than 65 plant species that takins feed on.

Tshewang's thoughts about takins go beyond science. In Bhutan, followers of Mahayana Buddhism believe in a cycle of rebirth. At monasteries around the country, you can find a large circular fresco of the Wheel of Life, showing six distinct rebirth realms--some considered auspicious, others not. One sector depicts rebirth in the animal realm. I ask Tshewang about returning as a wild takin. Auspicious? "Ah, yes, a good rebirth," he says, beaming. "The takin is well protected," he adds. "As a takin, your main problem would be getting from your winter range to your summer grounds and back, and worrying about predators along the way. But for forests, no problem. Bhutan has more than any other nation in Asia."

Author of Heartlands: Travels in the Tibetan World and Tibet: The Bradt Travel Guide, Michael Buckley has made many forays into the wilds of the Tibetan plateau.