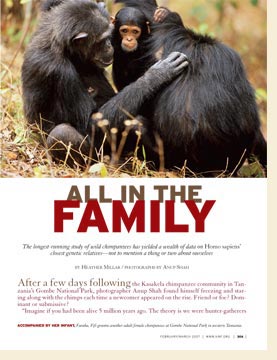 AFTER A FEW DAYS following the Kasakela chimpanzee community in Tanzania's Gombe National Park, photographer Anup Shah found himself freezing and staring along with the chimps each time a newcomer appeared on the rise. Friend or foe? Dominant or submissive?

Shah might not have felt such a close connection to the chimps if a 23-year-old named Jane Goodall had not set up camp at Gombe more than four decades ago. Goodall's patience, persistence, and idea to offer the chimps bananas in return for letting her watch them, led to behavioral observations that would ultimately change the way humans saw great apes, and themselves. Chimps, it turned out, have an almost humanlike enjoyment of physical contact, laughter and community. Even more stunningly, they make tools. They wage warfare. They commit murder, cannibalism and genocide. They may even transmit culture. 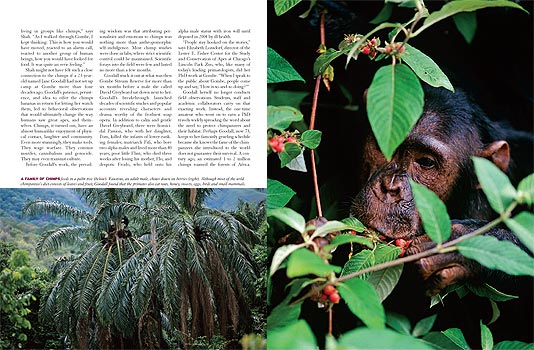 Before Goodall's work, the prevailing wisdom was that attributing personalities and emotions to chimps was nothing more than anthropomorphic self-indulgence. Most chimp studies were done in labs, where strict scientific control could be maintained. Scientific forays into the field were few and lasted no more than a few months.

Goodall stuck it out at what was then Gombe Stream Reserve for more than six months before a male she called David Greybeard sat down next to her. Goodall's breakthrough launched decades of scientific studies and popular accounts revealing characters and drama worthy of the frothiest soap opera. In addition to calm and gentle David Greybeard, there were homicidal Passion, who with her daughter, Pom, killed the infants of lower-ranking females; matriarch Fifi, who bore two alpha males and lived more than 40 years; poor little Flint, who died three weeks after losing his mother, Flo; and despotic Frodo, who held onto his alpha male status with iron will until deposed in 2004 by ill health.

"People stay hooked on the stories," says Elizabeth Lonsdorf, director of the Lester E. Fisher Center for the Study and Conservation of Apes at Chicago's Lincoln Park Zoo, who, like many of today's leading primatologists, did her PhD work at Gombe. "When I speak to the public about Gombe, people come up and say, 'How is so-and-so doing?'"

Goodall herself no longer conducts field observations. Students, staff and academic collaborators carry on that exacting work. Instead, the one-time amateur who went on to earn a PhD travels widely spreading the word about the need to protect chimpanzees and their habitat. Perhaps Goodall, now 73, keeps to her famously grueling schedule because she knows the fame of the chimpanzees she introduced to the world does not guarantee their survival. A century ago, an estimated 1 to 2 million chimps roamed the forests of Africa. Today only about 175,000 to 300,000 remain, many of them in small protected areas surrounded by expanding human populations and development. Now a national park, Gombe, for example, is bounded on one side by Lake Tanganyika and on all others by villages and deforested lands. 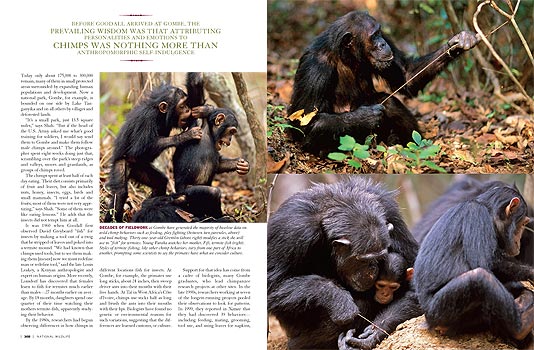 "It's a small park, just 13.5 square miles," says Shah. "But if the head of the U.S. Army asked me what's good training for soldiers, I would say send them to Gombe and make them follow male chimps around." The photographer spent eight weeks doing just that, scrambling over the park's steep ridges and valleys, moors and grasslands, as groups of chimps roved.

The chimps spent at least half of each day eating. Their diet consists primarily of fruit and leaves, but also includes nuts, honey, insects, eggs, birds and small mammals. "I tried a lot of the fruits; most of them were not very appetizing," says Shah. "Some of them were like eating lemons." He adds that the insects did not tempt him at all.

It was 1960 when Goodall first observed David Greybeard "fish" for insects by making a tool out of a twig that he stripped of leaves and poked into a termite mound. "We had known that chimps used tools, but to see them making them [meant] now we must redefine man or redefine tool," said the late Louis Leakey, a Kenyan anthropologist and expert on human origins. More recently, Lonsdorf has discovered that females learn to fish for termites much earlier than males--27 months earlier on average. By 18 months, daughters spend one quarter of their time watching their mothers termite-fish, apparently studying their behavior.

By the 1980s, researchers had begun observing differences in how chimps in different locations fish for insects. At Gombe, for example, the primates use long sticks, about 24 inches, then sweep driver ants into their mouths with their free hands. At Taï in West Africa's Côte d'Ivoire, chimps use sticks half as long and brush the ants into their mouths with their lips. Biologists have found no genetic or environmental reasons for such variations, suggesting that the differences are learned customs, or culture. 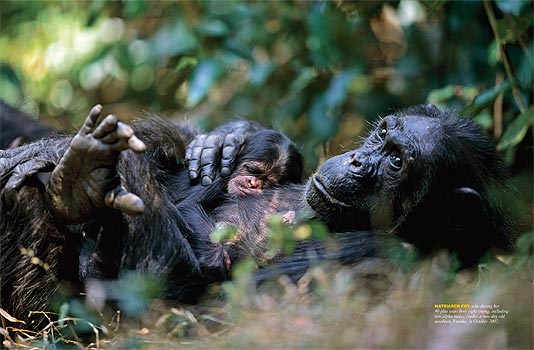 Support for that idea has come from a cadre of biologists, many Gombe graduates, who lead chimpanzee research projects at other sites. In the late 1990s, researchers working at seven of the longest-running projects pooled their observations to look for patterns. In 1999, they reported in Nature that they had discovered 39 behaviors--including feeding, mating, grooming, tool use, and using leaves for napkins, sponges or seats--where variations between chimps at different locations could not be attributed to either environment or genes.

When a male Gombe chimp wants to be groomed, for instance, he sprawls out on his stomach on the ground while a comrade runs a hand through the fur on his back, arm or leg. In the Mahale Mountains, just 90 miles south, chimps prefer to groom facing one another, each raising an arm in a salute-like gesture. Dominant males at Gombe assert their authority with "pant-hoot" calls that are relatively low pitched, while at Mahale these calls are high. At Gombe, chimps don't crack nuts, but at Taï they do. And only chimps at Gombe, Mahale and Kibale in Uganda dance when a heavy rain falls, dragging branches, slapping the ground and charging. 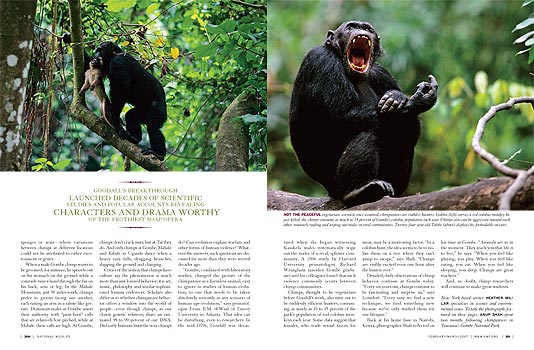 Critics of the notion that chimps have culture say the phenomenon is much more than just learned behavior; it is art, music, philosophy and similar sophisticated human endeavors. Scholars also differ as to whether chimpanzee behavior offers a window into the world of people--even though chimps, as our closest genetic relatives, share an estimated 98 to 99 percent of our DNA. Did early humans hunt the way chimps do? Can evolution explain warfare and other forms of human violence? Whatever the answers, such questions are discussed far more than they were several decades ago.

"Gombe, combined with laboratory studies, changed the picture of the chimpanzee as a harmless animal, easy to ignore in studies of human evolution, to one that needs to be taken absolutely seriously in any scenario of human-ape evolution," says primatologist Frans B.M. deWaal of Emory University in Atlanta. That idea can be disturbing, even to researchers. In the mid-1970s, Goodall was devastated when she began witnessing Kasakela males systematically wipe out the males of a rival, splinter community. A 2006 study by Harvard University primatologist Richard Wrangham (another Gombe graduate) and his colleagues found that such violence commonly occurs between chimp communities.

Chimps, thought to be vegetarians before Goodall's work, also turn out to be ruthlessly efficient hunters, consuming as much as 10 to 15 percent of the park's population of red colobus monkeys each year. Some data suggest that females, who trade sexual favors for meat, may be a motivating factor. "In a colobus hunt, the idea seems to be to isolate them on a tree where they can't jump to escape," says Shah. "Chimps are visibly excited even one hour after the hunt is over."

Detailed, daily observations of chimp behavior continue at Gombe today. "Forty-six years out, chimps continue to be fascinating and surprise us," says Lonsdorf. "Every time we find a new technique, we find something new because we've only studied them for one life span."

And, no doubt, chimp researchers will continue to make great students.