When the sun sets, a new cast of animals appears on the backyard stage; homeowners can provide food for pollinators and other nocturnal visitors 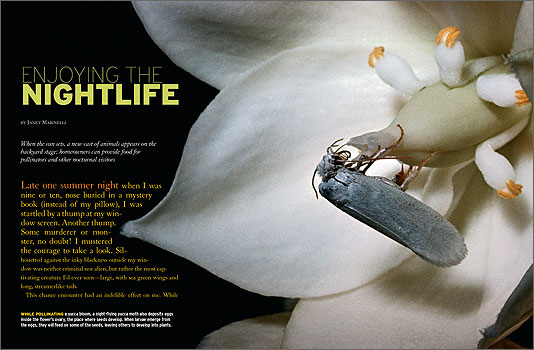 LATE ONE SUMMER NIGHT when I was nine or ten, nose buried in a mystery book (instead of my pillow), I was startled by a thump at my window screen. Another thump. Some murderer or monster, no doubt! I mustered the courage to take a look. Silhouetted against the inky blackness outside my window was neither criminal nor alien, but rather the most captivating creature I’d ever seen—large, with sea green wings and long, streamerlike tails.

This chance encounter had an indelible effect on me. While most gardeners lust after rare blue Himalayan poppies or dahlias the size of dinner plates, I’ve had a lifelong attraction to plants likely to lure nocturnal visitors like that lovely luna moth.

Over the years this ardor has rubbed off on my husband Don, who shares my special fondness for the bees, butterflies, hummingbirds and other pollinators that are so essential to the survival of plants from commercial crops to dainty wildflowers—and that are suffering alarming population declines worldwide. On hot, hazy summer afternoons we like to go into our Shelter Island, New York, garden, flop down on an old chaise lounge and watch the pollinators at work on our flowers. Butterflies are the daytime divas of these botanical love fests, but the real excitement begins at dusk.

As the sun sinks over Shelter Island Sound, our neighbors retreat indoors, butterflies flee to their roosting spots and a strange new world emerges in the moonlight. A chorus of wild voices, led by crickets, cicadas and katydids, raises a ruckus of ticks, chirps and buzzes. Owls and bats hunt overhead. When the garden’s riot of daylight colors has yielded to pallid blossoms illuminated by moonbeams, Don and I watch nocturnal pollinators take flight. 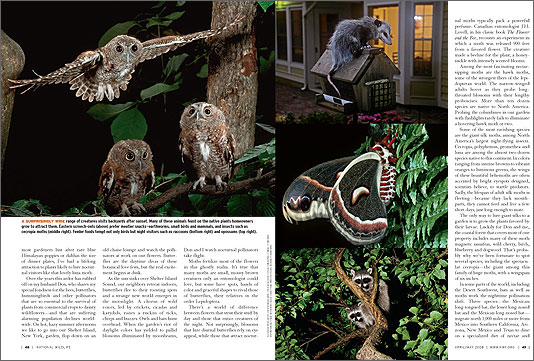 Moths fertilize most of the flowers in this ghostly realm. It’s true that many moths are small, mousy brown creatures only an entomologist could love, but some have spots, bands of color and graceful shapes to rival those of butterflies, their relatives in the order Lepidoptera.

There’s a world of difference between flowers that strut their stuff by day and those that entice creatures of the night. Not surprisingly, blossoms that lure diurnal butterflies rely on eye appeal, while those that attract nocturnal moths typically pack a powerful perfume. Canadian entomologist J.H. Lovell, in his classic book The Flower and the Bee, recounts an experiment in which a moth was released 900 feet from a favored flower. The creature made a beeline for the plant, a honeysuckle with intensely scented blooms.

Among the most fascinating nectar-sipping moths are the hawk moths, some of the strongest fliers of the lepidopteran world. The narrow-winged adults hover as they probe long-throated blossoms with their lengthy proboscises. More than ten dozen species are native to North America. Probing the columbines in our garden with flashlights rarely fails to illuminate a hovering hawk moth or two.

Some of the most ravishing species are the giant silk moths, among North America’s largest night-flying insects. Cecropia, polyphemus, promethea and luna are among the almost two-dozen species native to this continent. In colors ranging from intense browns to vibrant oranges to luminous greens, the wings of these beautiful behemoths are often accented by bright eyespots designed, scientists believe, to startle predators. Sadly, the lifespan of adult silk moths is fleeting—because they lack mouthparts, they cannot feed and live a few short days, just long enough to mate. 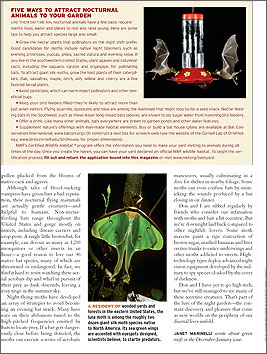 The only way to lure giant silks to a garden is to grow the plants favored by their larvae. Luckily for Don and me, the coastal forest that covers most of our property includes many of these moth magnets: sassafras, wild cherry, birch, blueberry and dogwood. That’s probably why we’ve been fortunate to spot several species, including the spectacular cecropia—the giant among this family of huge moths, with a wingspan of six inches.

In some parts of the world, including the Desert Southwest, bats as well as moths work the nighttime pollination shift. Three species—the Mexican long-tongued bat, the lesser long-nosed bat and the Mexican long-nosed bat—migrate north 1,000 miles or more from Mexico into Southern California, Arizona, New Mexico and Texas to dine on a specialized diet of nectar and pollen plucked from the blooms of native cacti and agaves.

Although tales of blood-sucking vampires have given bats a bad reputation, these nocturnal flying mammals are actually gentle creatures—and helpful to humans. Non-nectar-feeding bats range throughout the United States and gorge mostly on insects, including disease carriers and crop pests. A single little brown bat, for example, can devour as many as 1,200 mosquitoes or other insects in an hour—a good reason to love our 46 native bat species, many of which are threatened or endangered. In fact, we find it hard to resist watching these aerial acrobats dip and whirl in pursuit of their prey as dusk descends, leaving a rosy tinge in the summer sky.

Night-flying moths have developed an array of strategies to avoid becoming an evening bat snack. Many have ears on their abdomens tuned to the high-pitched frequencies emitted by bats to locate prey. If a bat gets dangerously close before being detected, the moths can execute a series of acrobatic maneuvers, usually culminating in a dive for shelter in nearby foliage. Some moths can even confuse bats by mimicking the sounds produced by a bat closing in on dinner.

Don and I are ribbed regularly by friends who consider our infatuation with moths and bats a bit eccentric. But we’re downright laid back compared to other nightlife lovers. Some moth mavens paint a ripe concoction of brown sugar, mashed bananas and beer on tree trunks to entice underwings and other moths addicted to sweets. High-technology types deploy advanced night vision equipment developed by the military to spy species cloaked by the cover of darkness.

Don and I have yet to go high tech, but we’ve still managed to see many of these secretive creatures. That’s part of the lure of the night garden—the constant discovery and pleasure that come as new worlds on the periphery of our diurnal lives unfold.

Janet Marinelli wrote about green roofs in the December/January 2008 issue.

Five Ways to Attract Nocturnal Animals to Your Garden

Like their daytime kin, nocturnal animals have a few basic requirements: food, water and places to rest and raise young. Here are some tips to help you attract species large and small:

Grow the nectar plants that pollinators on the night shift prefer. Good candidates for moths include native night bloomers such as evening primroses, yuccas, phlox, sacred datura and evening snow. If you live in the southwestern United States, plant agaves and columnar cacti, including the saguaro, cardon and organpipe, for pollinating bats. To attract giant silk moths, grow the host plants of their caterpillars. Oak, sassafras, maple, birch, ash, willow and cherry are a few favored larval plants.

Avoid pesticides, which can harm insect pollinators and other beneficial bugs.

Keep your bird feeders filled—they’re likely to attract more than just avian visitors. Flying squirrels, opossums and mice are among the mammals that might stop by for a seed snack. Nectar-feeding bats in the Southwest are known to sip sugar water from hummingbird feeders.

Offer a drink. Like many other animals, bats everywhere are drawn to garden ponds and other water features.

Supplement nature’s offerings with man-made habitat elements. Buy or build a bat house (plans are available at Bat Conservation International). Or construct a nest box for screech-owls (see the website of the Cornell Lab of Ornithology for proper dimensions).

The creatures are fascinating to watch, but sometimes backyard wildlife—whether nocturnal or diurnal—gets just a little too close for comfort. Below are a few tips for discouraging some of the most common species homeowners consider nuisances:

Raccoons: Cover trash cans securely; cap chimneys and repair loose shingles and vents to keep the animals out of the house; leave a radio on in an attic to chase away raccoons that already have set up housekeeping.

Deer: Surround your garden with plastic deer fencing at least 6 feet high; spray a nontoxic deer repellent on the most vulnerable plants.

Geese: It’s a crime to disturb nests without a federal permit, so contact your local animal control agency or a group like Geese Peace for help.