Shining a Light on Glass Frogs

In a remote, Costa Rican rain forest, a self-taught scientist is multiplying what we know about these tiny and elusive amphibians 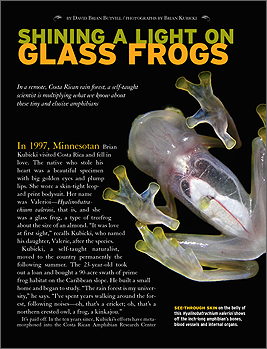 IN 1997, MINNESOTAN Brian Kubicki visited Costa Rica and fell in love. The native who stole his heart was a beautiful specimen with big golden eyes and plump lips. She wore a skin-tight leopard print bodysuit. Her name was Valerioi--Hyalinobatrachium valerioi, that is, and she was a glass frog, a type of treefrog about the size of an almond. "It was love at first sight," recalls Kubicki, who named his daughter, Valerie, after the species.


Kubicki, a self-taught naturalist, moved to the country permanently the following summer. The 23-year-old took out a loan and bought a 90-acre swath of prime frog habitat on the Caribbean slope. He built a small home and began to study. "The rain forest is my university," he says. "I've spent years walking around the forest, following noises--oh, that's a cricket; oh, that's a northern crested owl, a frog, a kinkajou."

It's paid off. In the ten years since, Kubicki's efforts have metamorphosed into the Costa Rican Amphibian Research Center (CRARC), the country's first organization dedicated to the study and conservation of amphibians. His intimate knowledge of the region is unrivaled, attracting to the center and its private reserve not only fellow scientists and conservationists, but BBC photographers and Discovery Channel film crews hoping to catch rare glimpses of biological gems--especially Kubicki's beloved glass frogs, some of the most elusive treasures of the Tropics.

Ranging from southern Mexico to northern Argentina, there are nearly 140 known species of glass frog. Costa Rica hosts 13 species--2 of them rediscovered by Kubicki more than 50 years after they'd previously been spotted by scientists. Last summer, Kubicki published the first book ever written about the animals, Glass Frogs of Costa Rica. "No other treatment of Neotropical frogs approaches [its] coverage," says University of Miami tropical amphibian expert Jay Savage. "Brian has done a truly remarkable job gathering important data on tropical amphibians." 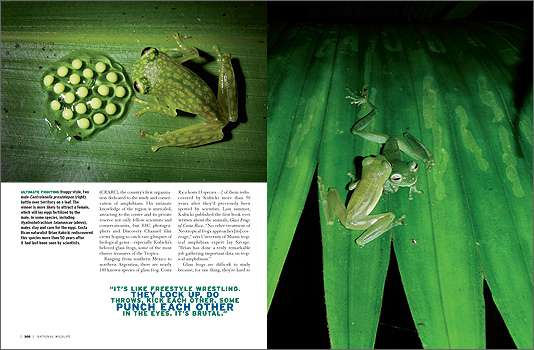 Glass frogs are difficult to study because, for one thing, they're hard to see, even right in front of your nose. Their skin--clear as glass on their bellies (with bones and organs on full display) and translucent green on their backs--gives the animals a ghostly appearance. Against a green leaf, where the frogs spend much of their time, they virtually vanish.

In addition, glass frogs are nocturnal and tend to hang out above mountain streams among overhanging leaves and branches, often in dense primary forest. The animals may be 10 or 20 feet up in a tree, or clinging to the wall of a waterfall. The only practical time to look for them is during the mating season, when males call out to females from such sites. "You go froggin' at nighttime, with a flashlight, and walk around and listen for their calls," Kubicki says.

The males' peeps and trills are not only love songs, but also declarations of territory, which may range from a single leaf to several feet of prime streamside real estate. "If a male's got a good spot--a super-cool pad with certain characteristics--he knows he'll probably have more success getting a female to breed," Kubicki explains. So he warns other males to keep off his turf. Ignore the warning, and things can get ugly. "They fight for it," Kubicki says. "It's like freestyle wrestling. They lock up, do throws, kick each other. Some punch each other in the eyes. It's brutal." 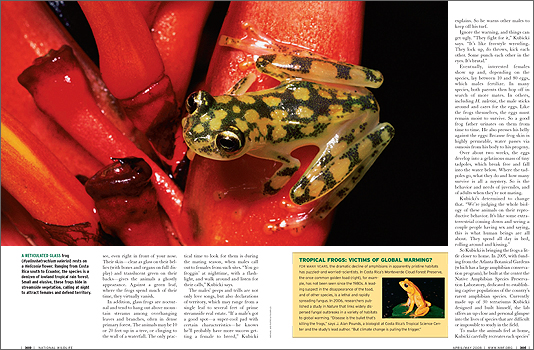 Eventually, interested females show up and, depending on the species, lay between 10 and 80 eggs, which males fertilize. In many species, both parents then hop off in search of more mates. In others, including H. valerioi, the male sticks around and cares for the eggs. Like the frogs themselves, the eggs must remain moist to survive. So a good frog father urinates on them from time to time. He also presses his belly against the eggs: Because frog skin is highly permeable, water passes via osmosis from his body to his progeny.

Over about two weeks, the eggs develop into a gelatinous mass of tiny tadpoles, which break free and fall into the water below. Where the tadpoles go, what they do and how many survive is all a mystery. So is the behavior and needs of juveniles, and of adults when they're not mating. Kubicki's determined to change that. "We're judging the whole biology of these animals on their reproductive behavior. It's like some extraterrestrial coming down and seeing a couple people having sex and saying, this is what human beings are all about. They spend all day in bed, rolling around and kissing."

So Kubicki is bringing the frogs a little closer to home. In 2005, with funding from the Atlanta Botanical Gardens (which has a large amphibian conservation program), he built at the center the Native Amphibian Species Preservation Laboratory, dedicated to establishing captive populations of the country's rarest amphibian species. Currently made up of 30 terrariums Kubicki designed and built himself, the lab offers an up-close and personal glimpse into the lives of species that are difficult or impossible to study in the field.

To make the animals feel at home, Kubicki carefully recreates each species' preferred habitat. First he forms a mini-landscape out of cement that may include cliffs, streambeds and depressions for ponds. Then he adds soil, rocks, moss, plants and a steady flow of water. A sprinkler system simulates rain, and a humidifier creates a daily fog like that bathing the country's Caribbean slope most afternoons. 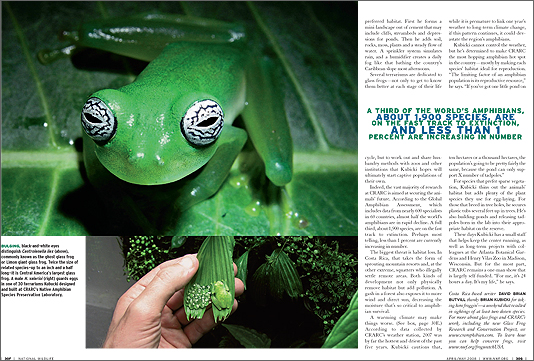 Several terrariums are dedicated to glass frogs--not only to get to know them better at each stage of their life cycle, but to work out and share husbandry methods with zoos and other institutions that Kubicki hopes will ultimately start captive populations of their own.

Indeed, the vast majority of research at CRARC is aimed at securing the animals' future. According to the Global Amphibian Assessment, which includes data from nearly 600 specialists in 60 countries, almost half the world's amphibians are in rapid decline. A full third, about 1,900 species, are on the fast track to extinction. Perhaps most telling, less than 1 percent are currently increasing in number.

The biggest threat is habitat loss. In Costa Rica, that takes the form of sprouting mountain resorts and, at the other extreme, squatters who illegally settle remote areas. Both kinds of development not only physically remove habitat but add pollution. A gash in a forest also exposes it to more wind and direct sun, decreasing the moisture that's so critical to amphibian survival.

A warming climate may make things worse. (See "Tropical Frogs: Victims of Global Warming?" below.) According to data collected by CRARC's weather station, 2007 was by far the hottest and driest of the past five years. Kubicki cautions that, while it is premature to link one year's weather to long-term climate change, if this pattern continues, it could devastate the region's amphibians.

Kubicki cannot control the weather, but he's determined to make CRARC the most hopping amphibian hot spot in the country--mostly by making each species' habitat ideal for reproduction. "The limiting factor of an amphibian population is its reproductive resource," he says. "If you've got one little pond on ten hectares or a thousand hectares, the population's going to be pretty fairly the same, because the pond can only support X number of tadpoles."

For species that prefer sparse vegetation, Kubicki thins out the animals' habitat but adds plenty of the plant species they use for egg-laying. For those that breed in tree holes, he secures plastic tubs several feet up in trees. He's also building ponds and releasing tadpoles born in the lab into their appropriate habitat on the reserve.

These days Kubicki has a small staff that helps keep the center running, as well as long-term projects with colleagues at the Atlanta Botanical Gardens and Henry Vilas Zoo in Madison, Wisconsin. But for the most part, CRARC remains a one-man show that is largely self-funded. "For me, it's 24 hours a day. It's my life," he says.

Costa Rica-based writer David Brian Butvill thanks Brian Kubicki for taking him froggin'--a weekend that resulted in sightings of at least two dozen species. For more about glass frogs and CRARC's work, including the new Glass Frog Research and Conservation Project, see www.cramphibian.com. To learn how you can help conserve frogs, visit www.nwf.org/frogwatchUSA.

For many years, the dramatic decline of amphibians in apparently pristine habitats has puzzled--and worried--scientists. In Costa Rica's Monteverde Cloud Forest Preserve, the once common golden toad, for example, has not been seen since the 1980s. A leading suspect in the disappearance of the toad, and of other species, is a lethal and rapidly spreading fungus. In 2006, researchers published a study in Nature that links widely dispersed fungal outbreaks in a variety of habitats to global warming. "Disease is the bullet that's killing the frogs," says J. Alan Pounds, a biologist at Costa Rica's Tropical Science Center and the study's lead author. "But climate change is pulling the trigger."