In a decades-long quest to shoot pictures of some of the world's rarest and most spectacular birds, a photographer learns about patience—and the power of individuals to make a difference 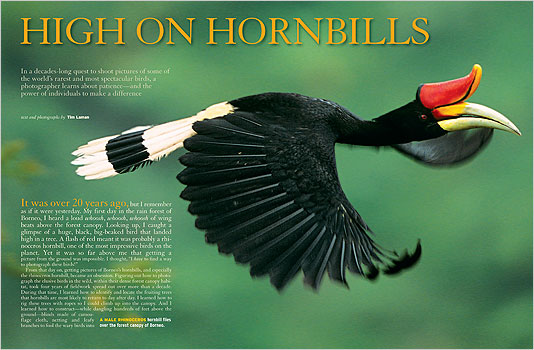 IT WAS OVER 20 years ago, but I remember as if it were yesterday. My first day in the rain forest of Borneo, I heard a loud whoosh, whoosh, whoosh of wing beats above the forest canopy. Looking up, I caught a glimpse of a huge, black, big-beaked bird that landed high in a tree. A flash of red meant it was probably a rhinoceros hornbill, one of the most impressive birds on the planet. Yet it was so far above me that getting a picture from the ground was impossible. I thought, “I have to find a way to photograph these birds!”

From that day on, getting pictures of Borneo’s hornbills, and especially the rhinoceros hornbill, became an obsession. Figuring out how to photograph the elusive birds in the wild, within their dense forest canopy habitat, took four years of fieldwork spread out over more than a decade. During that time, I learned how to identify and locate the fruiting trees that hornbills are most likely to return to day after day. I learned how to rig these trees with ropes so I could climb up into the canopy. And I learned how to construct—while dangling hundreds of feet above the ground—blinds made of camouflage cloth, netting and leafy branches to fool the wary birds into letting me get close enough for intimate pictures. Finally, I learned that to photograph hornbills you need to have a lot of patience.

Gradually, I succeeded and expanded my pursuit to more than a dozen hornbill species, not only in Indonesia, but also in Thailand and the Philippines. To date, I’ve shot over 300 rolls of film—more than 10,000 photographs—of Asian hornbills. At the same time, I’ve found out quite a bit about the lives of these fascinating creatures. Sadly, I’ve also seen firsthand the threats they face, especially from the loss of their forest habitat. 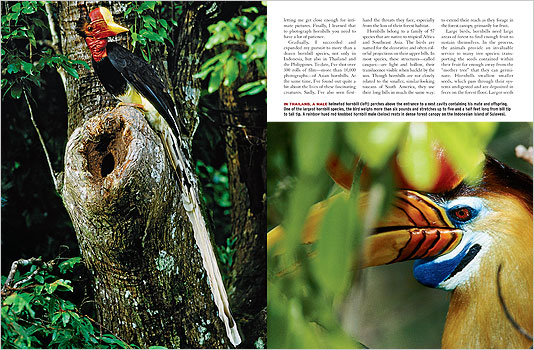 Hornbills belong to a family of 57 species that are native to tropical Africa and Southeast Asia. The birds are named for the decorative and often colorful projections on their upper bills. In most species, these structures—called casques—are light and hollow, their translucence visible when backlit by the sun. Though hornbills are not closely related to the smaller, similar-looking toucans of South America, they use their long bills in much the same way: to extend their reach as they forage in the forest canopy, primarily for fruit.

Large birds, hornbills need large areas of forest to find enough fruit to sustain themselves. In the process, the animals provide an invaluable service to many tree species: transporting the seeds contained within their fruit far enough away from the “mother tree” that they can germinate. Hornbills swallow smaller seeds, which pass through their systems undigested and are deposited in feces on the forest floor. Larger seeds are regurgitated and spit out after the birds work the flesh loose in their stomachs. Although other animals also disperse the seeds of rain forest trees, hornbills are among the most effective because they travel widely and do not destroy seeds by chewing them, like many mammals, or by grinding them up in their gizzards, like many birds. For the critical role they play in forest ecosystems, longtime hornbill researchers Margaret Kinnaird and Tim O’Brien, authors of The Ecology and Conservation of Asian Hornbills, have dubbed the birds the “farmers of the forest.”

While different hornbill species have somewhat different diets, dispersing the seeds of different trees, there is one characteristic shared by all Asian hornbills: an unusual nesting strategy found in no other kind of bird on Earth. When a female hornbill is ready to lay eggs, she enters a hole in a tree, then seals the entrance—using a combination of feces, regurgitated fruit and mud delivered by her mate—leaving just a narrow opening. Once sealed in, the female is totally dependent on the male, who passes food to her through the hole. For up to four months, the bird remains walled off from the world as she incubates her eggs and raises the chicks. A costly and risky nesting strategy—the family is doomed if anything happens to the male—it provides hornbills nearly 100 percent protection against predators of eggs and hatchlings. 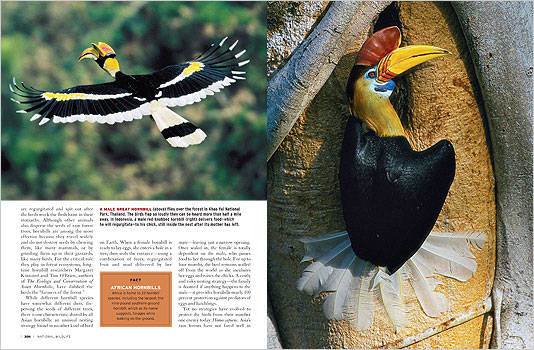 Yet no strategies have evolved to protect the birds from their number one enemy today: Homo sapiens. Asia’s rain forests have not fared well in recent decades, and hornbills—which depend completely on these intact habitats—are suffering along with them. According to the World Resources Institute, Thailand and the Philippines each had lost over 80 percent of their original forest cover by 2000, while Indonesia had lost half—percentages that have continued increasing since then. In some places, hunting and poaching of hornbill nestlings for the pet trade is also a problem. Not surprisingly, 20 out of 31 Asian hornbill species are considered of “conservation concern” by the International Union for Conservation of Nature, with a few species hovering close to extinction.

Fortunately, during my travels to photograph the birds, I’ve encountered a few good-news stories. While photographing hornbills inside their nests in Thailand (see sidebar below), I worked with a remarkable Thai biologist and conservationist named Pilai Poonswad. In addition to her pioneering research on the birds’ breeding biology, Poonswad helped set up a project that is turning former hornbill chick poachers into the birds’ guardians by paying them to monitor and protect nest sites. Poonswad has been able to convince many poor villagers that, in the long run, conserving hornbills and their forests will provide many more benefits than the quick cash from a chick sold as a pet. Her work is funded in part by an “adopt a hornbill nest” program. For as little as $150 a year, anyone in the world can become part of Poonswad’s team by supporting the protection of a nest within her study area. 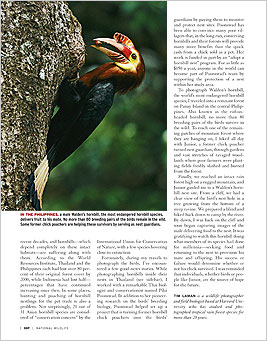 To photograph Walden’s hornbill, the world’s most endangered hornbill species, I traveled into a remnant forest on Panay Island in the central Philippines. Also known as the rufous-headed hornbill, no more than 80 breeding pairs of the birds survive in the wild. To reach one of the remaining patches of mountain forest where they are hanging on, I hiked all day with Junior, a former chick poacher turned nest guardian, through gardens and vast stretches of ravaged woodlands where poor farmers were planting fields freshly slashed and burned from the forest.

Finally, we reached an intact rain forest high on a rugged mountain, and Junior guided me to a Walden’s hornbill nest site. From a cliff, we had a clear view of the bird’s nest hole in a tree growing from the bottom of a steep ravine. We prepared a blind and hiked back down to camp by the river. By dawn, I was back on the cliff and soon began capturing images of the male delivering food to the nest. It was gratifying to watch this hornbill doing what members of its species had done for millennia—seeking food and returning to the nest to provision his mate and offspring. His success or failure would determine whether or not his chick survived. I was reminded that individuals, whether birds or people like Junior, are the source of hope for the future.

Tim Laman is a wildlife photographer and field biologist based at Harvard University who has studied and photographed tropical rain forest species for more than 20 years.

Secret Lives: A Window into the World of Hornbills

I’d long wanted to see and photograph the scene inside a hornbill nest cavity. In 1999 I finally got my chance by working with hornbill researcher and conservationist Pilai Poonswad in central Thailand. Along with participants in her Thailand Hornbill Project, Poonswad took me to Khao Yai National Park, where researchers for many years had been monitoring great hornbill nests. That year, before the nesting season began, the team selected two trees containing nest holes previously used by the birds, then installed viewing platforms and canvas blinds 80 feet up their trunks. Through the rear wall of the nest cavities, we cut small windows, built wooden frames around the openings, then covered them with sliding doors (installation, below). Our hope was that the researchers would be able to monitor hornbill nesting behavior while I shot some pictures of the birds. 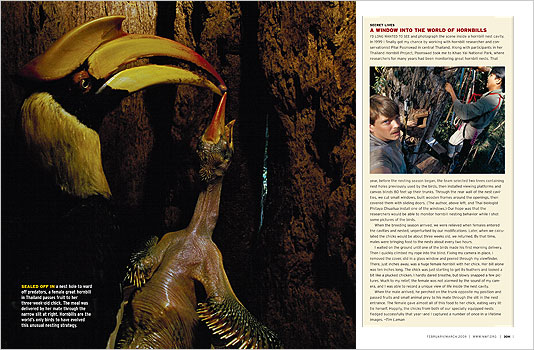 When the breeding season arrived, we were relieved when females entered the cavities and nested, unperturbed by our modifications. Later, when we calculated the chicks would be about three weeks old, we returned. By that time, males were bringing food to the nests about every two hours.

I waited on the ground until one of the birds made his first morning delivery. Then I quickly climbed my rope into the blind. Fixing my camera in place, I removed the cover, slid in a glass window and peered through my viewfinder. There, just inches away, was a huge female hornbill with her chick. Her bill alone was ten inches long. The chick was just starting to get its feathers and looked a bit like a plucked chicken. I hardly dared breathe, but slowly snapped a few pictures. Much to my relief, the female was not alarmed by the sound of my camera, and I was able to record a unique view of life inside the nest cavity.

When the male arrived, he perched on the trunk opposite my position and passed fruits and small animal prey to his mate through the slit in the nest entrance. The female gave almost all of this food to her chick, eating very little herself. Happily, the chicks from both of our specially equipped nests fledged successfully that year—and I captured a number of once-in-a-lifetime images.