Unlikely Partners in the Sea 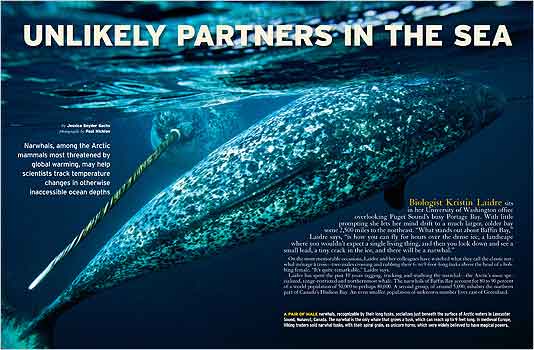 BIOLOGIST Kristin Laidre sits in her University of Washington office overlooking Puget Sound’s busy Portage Bay. With little prompting she lets her mind drift to a much larger, colder bay some 2,500 miles to the northeast. “What stands out about Baffin Bay,” Laidre says, “is how you can fly for hours over the dense ice, a landscape where you wouldn’t expect a single living thing, and then you look down and see a small lead, a tiny crack in the ice, and there will be a narwhal.”

On the most memorable occasions, Laidre and her colleagues have watched what they call the classic narwhal ménage à trois—two males crossing and rubbing their 6- to 9-foot-long tusks above the head of a bobbing female. “It’s quite remarkable,” Laidre says. Laidre has spent the past 10 years tagging, tracking and studying the narwhal—the Arctic’s most specialized, range-restricted and northernmost whale. The narwhals of Baffin Bay account for 80 to 90 percent of a world population of 50,000 to perhaps 80,000. A second group, of around 5,000, inhabits the northern part of Canada’s Hudson Bay. An even smaller population of unknown number lives east of Greenland.

The narwhals that winter in the deep water of central Baffin Bay get there by migrating thousands of miles from summering areas in the shallow bays and fjords of the High Arctic. Despite the extreme cold and ice cover, winter is a period of intense activity for this small, highly social whale. Winter is mating as well as feeding season, a time when narwhals consume the vast majority of their yearly diet. 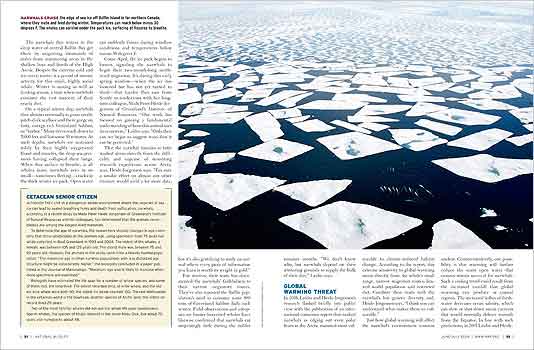 On a typical winter day, narwhals dive almost continually to graze on the pitch-dark seafloor and there gorge on fatty, energy-rich Greenland halibut, or “turbot.” Many dives reach down to 5,000 feet and last some 30 minutes. At such depths, narwhals are sustained solely by their highly oxygenated blood and muscles, the deep-sea pressures having collapsed their lungs. When they surface to breathe, as all whales must, narwhals zero in on small—sometimes fleeting—cracks in the thick winter ice pack. Open water can suddenly freeze during windless conditions and temperatures below minus 30 degrees F.

Come April, the ice pack begins to loosen, signaling the narwhals to begin their two-month-long northward migration. It’s during this early spring window—when the ice has loosened but has not yet turned to slush—that Laidre flies east from Seattle to rendezvous with her longtime colleague, Mads Peter Heide-Jorgensen of Greenland’s Institute of Natural Resources. “Our work has focused on gaining a fundamental understanding of how this animal uses its ecosystem,” Laidre says. “Only then can we begin to suggest ways that it can be protected.”

That the narwhal remains so little studied stems directly from the difficulty and expense of mounting research expeditions across Arctic seas, Heide-Jorgensen says. “I’m sure a similar effort on almost any other creature would yield a lot more data, but it’s also gratifying to study an animal where every piece of information you learn is worth its weight in gold.” For starters, their team has documented the narwhals’ faithfulness to their narrow migratory routes. They’ve also reported the Baffin population’s need to consume some 880 tons of Greenland halibut daily each winter. Field observations and autopsies on hunter-harvested whales have likewise confirmed that narwhals eat surprisingly little during the milder summer months. “We don’t know why, but narwhals depend on their wintering grounds to supply the bulk of their diet,” Laidre says.

Global Warming Threat
In 2008, Laidre and Heide-Jorgensen’s research flashed briefly into public view with the publication of an international consensus report that ranked narwhals as edging out even polar bears as the Arctic mammal most vulnerable to climate-induced habitat change. According to the report, this extreme sensitivity to global warming stems directly from the whale’s small range, narrow migration routes, limited world population and restricted diet. Combine these traits with the narwhal’s low genetic diversity and, Heide-Jorgensen says, “I think you can understand what makes them so vulnerable.”

Just how global warming will affect the narwhal’s environment remains unclear. Counterintuitively, one possibility is that warming will further reduce the scant open water that ensures winter survival for narwhals. Such a cooling trend could result from the increased rainfall that global warming can produce in coastal regions. The increased influx of freshwater decreases ocean salinity, which can slow or shut down ocean currents that would normally deliver warmth from the Equator. In line with such predictions, in 2005 Laidre and Heide-Jorgensen reported that Baffin Bay sea ice cover had been steadily increasing since 1978. During this time, the percentage of open water at the end of winter had shrunk to an average of just one half of 1 percent. “Now that seems to have reversed,” Laidre says of the last four years. “Instead we’re now seeing less and less ice cover.” 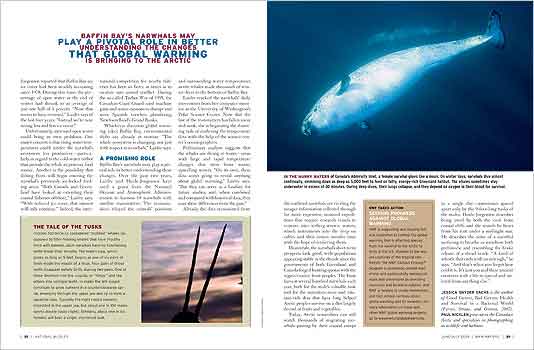 Unfortunately, increased open water could bring its own problems. One major concern is that rising water temperatures could render the narwhal’s ecosystem less productive—particularly in regard to the cold-water turbot that provide the whale its primary food source. Another is the possibility that fishing fleets will begin entering the narwhal’s previously ice-locked feeding areas. “Both Canada and Greenland have looked at extending their coastal fisheries offshore,” Laidre says. “With reduced ice cover, that interest will only continue.” Indeed, the international competition for nearby fisheries has been so fierce at times as to escalate into armed conflict. During the so-called Turbot War of 1995, the Canadian Coast Guard used machine guns and water cannons to disrupt and seize Spanish trawlers plundering Newfoundland’s Grand Banks. Whichever direction global warming takes Baffin Bay, environmental shifts are already in motion. “The whole ecosystem is changing, not just with respect to narwhals,” Laidre says.

A Promising Role
Baffin Bay’s narwhals may play a pivotal role in better understanding these changes. Over the past two years, Laidre and Heide-Jorgensen have used a grant from the National Oceanic and Atmospheric Administration to harness 10 narwhals with satellite transmitters. The transmissions relayed the animals’ positions and surrounding water temperatures as the whales made thousands of winter dives to the bottom of Baffin Bay.

Laidre tracked the narwhals’ daily movements from her computer monitor at the University of Washington’s Polar Science Center. Now that the last of the transmitters has fallen away and sunk, she is beginning the daunting task of analyzing the temperature data with the help of the science center’s oceanographers.

Preliminary analysis suggests that the whales are diving at fronts—areas with large and rapid temperature changes that stem from warm, upwelling waters. “On its own, these data aren’t going to reveal anything about global warming,” Laidre says. “But they can serve as a baseline for future studies, and, when combined and compared with historical data, they may show differences from the past.”

Already the data transmitted from the outfitted narwhals are rivaling the meager information collected through far more expensive, manned expeditions that require research vessels to venture into iceberg-strewn waters, winch instruments into the deep on cables and then return months later with the hope of retrieving them.

Meanwhile, the narwhal’s short-term prospects look good, with populations appearing stable in the decade since the governments of both Greenland and Canada forged hunting quotas with the region’s native Inuit peoples. The Inuit harvest several hundred narwhals each year, both for the male’s valuable tusk and for the nutritious meat and vitamin-rich skin that have long helped Arctic peoples survive on a diet largely devoid of fruits and vegetables.

Today, Arctic researchers can still watch thousands of migrating narwhals passing by their coastal camps in a single day—sometimes spaced apart only by the 9-foot-long tusks of the males. Heide-Jorgensen describes being awed by both the view from coastal cliffs and the sounds he hears from his tent under a midnight sun. He describes the noise of a narwhal surfacing to breathe as somehow both prehistoric and resembling the brake release of a diesel truck. “A kind of whistle that ends with an airy sigh,” he says. “And that’s when you forget how cold it is. It’s just you and these ancient creatures with a life so special and isolated from anything else.”

Jessica Snyder Sachs is the author of Good Germs, Bad Germs: Health and Survival in a Bacterial World (Farrar, Straus, and Giroux, 2007).

The Tale of the Tusks

Though technically considered “toothed” whales (as opposed to filter-feeding whales that have mouths lined with baleen), adult narwhals have no functioning teeth inside their mouths. The male’s tusk, which grows as long as 9 feet, begins as one of six pairs of teeth inside the mouth of a fetus. Four pairs of those teeth disappear before birth, leaving two pairs. One of these develops into the cuspids, or “fangs,” and the others into vestigial teeth. In males the left cuspid continues to grow outward in a counterclockwise spiral, emerging through the upper jaw and lip to form a spearlike tusk. Typically the right cuspid remains imbedded in the upper jaw, but about one in 100 males sports double tusks. Similarly, about one in six females will bear a single, shortened tusk.

Although they live in a dangerous winter environment where the vagaries of sea ice can lead to sealed breathing holes and death from suffocation, narwhals, according to a recent study by Mads Peter Heide-Jorgensen of Greenland’s Institute of Natural Resources and his colleagues, has determined that the animals nevertheless are among the longest-lived mammals.

To determine the age of narwhals, the researchers studied changes in eye chemistry that occur predictably as the animals age, using specimens from 75 dead narwhals collected in West Greenland in 1993 and 2004. The oldest of the whales, a female, was between 105 and 125 years old. The oldest male was between 75 and 93 years old. However, the animals in the study came from a heavily hunted population. “The maximum age in other narwhal populations with less disturbed age structure might be considerably higher,” the biologists concluded in a paper published in the Journal of Mammalogy. “Maximum age also is likely to increase when more specimens are examined.”

Biologists have estimated the life span for a number of whale species, and some of them, too, are long-lived. The oldest recorded orca, or killer whale, and the oldest blue whale were both 90; the oldest fin whale reached 100. The real Methuselah in the cetacean world is the bowhead, another species of Arctic seas; the oldest on record lived 211 years.

Two of the most familiar whales did not win the whale life span sweepstakes. Sperm whales, the species of titular interest in the novel Moby Dick, live about 70 years and humpbacks about 48.

NWF is supporting and shaping federal legislation to combat the global warming that is affecting species from the narwhal in the Arctic to birds in the U.S. Midwest to the myriad creatures of the tropical rain forests. The NWF Campus Ecology® program is promoting climate leadership and sustainability among colleges and universities by providing resources and technical support, and NWF is helping to create elementary and high school curricula about global warming and its remedies. For more information on these and other NWF global warming projects, go to www.nwf.org/globalwarming.