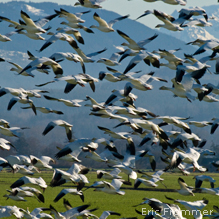 Several years have passed since studies demonstrated that global warming changes where and when animals feed and breed. Two benchmark reports in 2003 showed that more than 100 species had shifted their range toward the poles at an average pace of around 4 miles a decade, and that thousands of others were emerging, migrating or breeding days to weeks earlier than they did a century ago.

But species differ in the way they adapt to climate change. As a result, range shifts by animal populations can create problems with animals that remain in their historical ranges. And changes in seasonal timing can knock animals out of sync with the seasonal appearance of the plants and prey they need to survive.

Now a scattering of reports suggest these mismatches may be producing new kinds of behavioral changes. “We’re seeing a pattern,” says Camille Parmesan, a biologist at the University of Texas, Austin. “The first kinds of behavioral changes were changes in range and timing. Now we’re seeing changes in diets and other behaviors that show some animals are trying to adapt to their new circumstances. Unfortunately, many instances are more an act of desperation than a true adaptation.”

A few examples from the avian world:

Poster children for global warming, polar bears in the Arctic confront dwindling sea ice, resulting in less access to the ringed seals they prey upon in spring. The first bears to come off the ice are also beginning to overlap with the nesting season of Arctic geese and ducks. Some experts believe this may be turning an occasional deviation—a bear snacking on eggs—into a regular habit. “We’re definitely seeing an increase in the last five to six years,” says snow goose expert Robert Rockwell of the American Museum of Natural History.

Rockwell’s suggestion that goose eggs may help hungry polar bears survive remains controversial. But there’s no doubt that the bears are having an impact on the birds:

On the Norwegian island archipelago of Svalbar, barnacle goose populations have been rebounding from a brush with near extinction 40 years ago. But in 2004, a female polar bear and her cub all but wiped out the eggs and newly hatched chicks on one of the islands. By herself, the mother ate some 900 goose and duck eggs in three visits, reports zoologist Jouke Prop of the University of Groningen in the Netherlands. Ten years ago, polar bears had never been seen on the breeding islands during nesting season, Prop adds. Today they are increasingly present.

An increase in egg-gobbling polar bears is also affecting colonies of snow geese Rockwell studies along the shores of northern Manitoba’s La Perouse Bay. But this might turn out to be a good thing. “In 1969, this goose colony had around 2,500 nesting pairs,” he explains. “Now it’s over 50,000...Lots of people think it’s cool to see these beautiful funnel clouds of snow geese. Problem is, the Arctic environment is very fragile, and these guys have beaten it to death.”

Great tits in Britain and the Netherlands

In a handful of cases, animals are clearly adapting to global warming—at least in the short term. In Britain, great tits are laying their eggs earlier in spring, keeping in step with earlier emergence of the caterpillars needed to feed their chicks. Specifically, the British great tits are laying their first clutch of eggs about two weeks earlier than they were 50 years ago. The bird’s egg laying and the caterpillar’s emergence both appear linked to temperature, concludes Oxford University ecologist Ben Sheldon.

But just across the North Sea, in the Netherlands, great tits are not doing so well. They, too, have advanced their egg-laying over the years, but not at the pace or extent of their British counterparts. As a result, the time when chicks need the most food now lags behind the peak in caterpillar biomass by nine days, reports Marcel Visser of the Netherlands Institute of Ecology.

Visser believes that this mistiming accounts for a dramatic drop in “double brooding” among his country’s great tits. In the 1950s, he says, most of the birds produced a second clutch of chicks each season. Now as few as 5 percent manage to do so. Linking this decline back to climate change, Visser found that only when a female’s first clutch of chicks coincides with peak caterpillar abundance is she likely to produce a second brood.

Find out how the National Wildlife Federation is fighting global warming--and how you can help.
Visit our birds and birding archives.