Spring Fever? Animals Get It, Too

The season's warmer temperatures and longer days are nice for humans, but for wildlife, they are absolutely essential 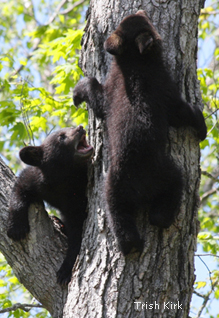 Spring in the Northern Hemisphere officially begins not with warm weather or the arrival of robins but with the sun arriving directly over the Equator as the Earth moves through its orbit. When this happens, day and night are almost equal in length. But for wildlife, the little details of the seasons are lost in the big picture.

For most creatures, spring means more warmth and more daylight, and these two elements have major effects on animal behavior.

Forest wildflowers push shoots above ground in spring, taking advantage of the sunlight they receive before trees grow leaves and shade them. Even in prairies, some smaller plants flower quickly in spring before taller grasses block out the sun. The growth of plants provides food and nesting material for many species that themselves provide food for predators. In spring, insects crawl from hiding places or take to the wing, providing food for nesting birds. Spring is the season when nature stretches unused muscles and gets back to the work of producing the next generation.

An End to Hibernation

Hibernating animals have slept through all or much of the winter, saving energy and, in some cases, living off stored fat. While zoned out for the cold months, they slowed way down. For example, a chipmunk’s heart rate declines from about 350 beats per minute to perhaps 4 beats per minute during hibernation. Hibernating animals include bears, hedgehogs, woodchucks, bats and various ground squirrels. 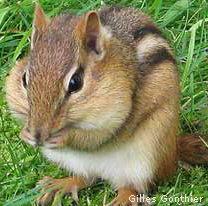 But the practice of hibernation varies from species to species. A chipmunk’s body temperature may drop during hibernation from 94 degrees F to whatever the temperature of its burrow—as cold as 40 degrees F. A bear, on the other hand, will maintain a hibernating temperature of 88 to 97 degrees, just a bit below its summer temperature of 100 degrees. Bears will sometimes wake briefly during winter, but may go without eating, urinating or defecating the entire time. They live on fat reserves. Chipmunks wake every few days, raise their body temperatures to normal, feed on stored food rather than fat reserves, and urinate and defecate. When chipmunks are in the deep sleep phase of hibernation, they may be very difficult to arouse; bears wake up more quickly. (Read here for a fascinating comparison of bear and chipmunk hibernation.)

With the arrival of spring or late winter warmth, revived hibernating animals go out into the world seeking food and, in some cases, mates. Chipmunks may mate as early as February and may be seen running across remnants of winter snow.

Love is in the Air (and in the Pond)

Even urban residents may notice that in spring, trees become broadcasting sites for birds—they chirp, whistle and warble—sometimes disturbing slumbering humans at daybreak. Songs are used to attract mates and to warn away rivals. More unusual, however, is the behavior of various salamander, toad and frog species. These animals are amphibians, their lives split between dry habitat and water. Almost all of them need water bodies in which to lay eggs. Consequently, in spring, many amphibian species converge on ponds—possibly the very ponds where they themselves hatched. Many of these species coordinate their mating with the phases of the full moon, so that hundreds or even thousands of them show up on the same night at the same pond to breed, increasing their chances of success in the mating game. They are following urges and pathways that may be thousands of years old, but they may find that things have changed since their early ancestors first trod the earth. Roads, for example, may now lie between them and their breeding pond. In some areas, hundreds of toads, frogs or salamanders may hop or slither across roads in mass movements that set up the animals as easy victims for motor vehicles. But dedicated amphibian fans have come to the rescue in some places, carrying the animals across roads in buckets or building tunnels for the animals to use.

Spring for the Young

Not all creatures mate in spring. Deer, for example, mate in the fall, which allows their fawns to be born during the abundance of spring. Many species that live in the northern reaches of the Earth, including wolves and coyotes as well as deer and birds, time their mating behaviors to produce young in spring. However, like the seasons themselves, even mating seasons can vary within a species. Animals native to the tropics or subtropics, where little seasonal variation in climate occurs, may not even have defined breeding seasons, because for them no risks arise from giving birth in months that in northern climes would be brutally cold, with food hard to find. In this way, the seasons shape the most basic of species behaviors—meaning that, in effect, feeding and migrating, mating and nesting, are by-products of an oblique relationship between the blue planet and the sun. What happens in outer space, doesn’t stay in outer space.

Create a certified wildlife habitat - get started today!
Open the door and get outside! Be Out There.
Visit our new adoption center and symbolically adopt an animal today.