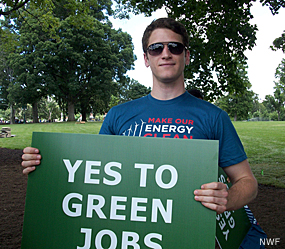 For more than two decades, NWF has been helping colleges and universities across the country reduce their impact on the environment. They’ve been making great strides. “We have the documentation to prove it,” says Kristy Jones, NWF’s senior manager of campus climate education and action.

Updated annually since 1989, the Campus Ecology® sustainability case studies database includes information on project goals, funding strategies, successes and challenges. Available online and searchable by topic, year, state and school, it’s the only resource of its kind in the United States.

“Colleges and universities in North America are raising the bar for innovative conservation practices to reduce emissions and protect wildlife and habitat,” says Jones. Nearly 100 case studies were added in 2010, highlighting efforts ranging from recycling and energy efficiency to alternative transportation systems and nature reserve management.

But campus achievements are not limited to those highlighted in the database. Other recent efforts include:


The Greenforce Initiative®—NWF and its partner Jobs for the Future have hosted six regional summits and engaged more than 100 community colleges since the initiative launched last fall. The purpose of the partnership’s outreach: to strengthen the capacity of the schools to develop, enhance or refine green career pathway programs.

Going Underground On Campus: Tapping the Earth for Clean, Efficient Sources of Heating and Cooling—More than 160 campuses are featured in NWF’s new guide to geothermal energy and underground buildings. The document is “a concise, well-organized and very instructive survey of the landscape of opportunities,” says Robert Koester, professor of architecture at Ball State University and chair of the Council on the Environment.

“Our greenhouse gas emissions inventories have identified buildings as among the largest direct sources of emissions, and heating, ventilating and air-conditioning (HVAC) systems as the biggest culprits,” says Julian Keniry, NWF’s senior director of campus and community leadership. Able to reduce HVAC emissions by 40 percent or more, she adds, “ground-based heat pumps and other types of geothermal systems are important options with a growing following.”

Learn more about these and other campus efforts.

Tune In, Chill Out

NWF’s annual Chill Out: Climate Action on Campus competition recognizes institutions of higher learning for their positive efforts to reduce greenhouse gas emissions. This year’s winners will be announced in a webcast on April 13.

In addition to hosting workshops and guest-speaker presentations, NWF will be celebrating its 75 years of conservation at its upcoming annual meeting. The gathering will take place in the nation’s capital April 14–16 at the Hyatt Regency Washington on Capitol Hill. For more details, including registration information, visit the annual meeting website or call 703-438-6299.

new NWF peer-reviewed report provides natural resource managers with invaluable information to help them prepare for and cope with the effects of global warming. A year and half in the making, Scanning the Conservation Horizon: A Guide to Climate Change Vulnerability Assessment was developed by a panel of government, university and nonprofit-group scientists in conjunction with NWF’s wildlife safeguards team.

“The crucial first step in protecting our wildlife and wild places from global warming is to understand which ecological resources are in greatest jeopardy,” says Bruce Stein, NWF director of climate change adaptation and one of the study’s authors. “Vulnerability assessment is an essential tool for crafting truly climate-smart conservation strategies.”

Among other things, the report will aid managers in identifying species and natural systems that are likely to need conservation action as a result of warming and in tailoring existing scientific approaches to particular situations.

“This new guide is a powerful tool,” says Rowan Gould, acting director of the U.S. Fish and Wildlife Service.

NWF recently released a report warning that demand for palm oil—already used in as much as 50 percent of packaged retail food products worldwide and as a biofuel—may rise sharply in the next few years, leading to significant new pressures on tropical forests and new emissions of greenhouse gases that result from the clearing and draining of forests and peatlands.

“More than 85 percent of world palm oil comes from Malaysia and Indonesia, with the rest coming from South America, Africa and other tropical areas,” says Eric Palola, senior director of NWF’s Forests for Wildlife program, who oversaw production of the report, Food, Fuel, or Forests? Charting a Responsible U.S. Role in Global Palm Oil Expansion. “U.S. imports of palm oil, though low now, are increasing in the wake of government regulations concerning trans fats in food. American companies and consumers have a responsibility to influence the expansion of palm oil agriculture in a sustainable direction.”

With annual global production at 48 million tons, palm oil has overtaken soybean and canola as the world’s most widely used vegetable oil. During the next decade, global demand for vegetable oils and biofuels is expected to rise 50 percent and 40 percent, respectively. “Palm oil supply chains to the United States are growing, and this report sets out the steps U.S. companies can take to play an active role in improving the environmental and social standards of the palm oil industry,” Palola says.

To powerfully convey the impact of the BP oil spill on the Gulf of Mexico’s wildlife, NWF released a series of animated maps showing the timing and location of dead and injured birds, marine mammals and sea turtles collected during the months after the Deepwater Horizon rig exploded. The numbers—more than 8,000 individuals at the time the maps were made—came from the U.S. Fish and Wildlife Service (birds) and National Oceanic and Atmospheric Administration (marine mammals and sea turtles). “While the actual cause of death has yet to be determined for most of the wildlife, it is clear that a large proportion of deaths and injuries were related to the spill,” says NWF Senior Scientist Doug Inkley. View all the maps.

To help connect kids with nature, NWF assists schools in developing outdoor classrooms called Schoolyard Habitats®—places where students hone their academic skills, nurture their curiosity and learn how to attract and support local wildlife. A how-to guide, lesson plans and community outreach tips are among the resources offered to educators and parent volunteers.

NWF is teaming up with the film Born to be Wild to extend the movie’s lessons about the remarkable bonds between people and wild animals. The movie opens exclusively in IMAX® theaters nationwide on April 8, with NWF serving as an official education partner.

Narrated by actor Morgan Freeman and filmed in IMAX 3D, Born to be Wild transports moviegoers into the rain forests of Borneo with primatologist Biruté Mary Galdikas and across the rugged Kenyan savannah with elephant authority Dame Daphne Sheldrick, as they and their teams rescue, rehabilitate and return orangutans and elephants back to the wild.

“We hope the real-life conservation stories in the film will inspire more people to get involved with helping wildlife where they live through our Certified Wildlife Habitat™ program,” says Carey Stanton, NWF senior director for education.

“Through a combination of panel and small group discussions, skills training, and shared brainstorming, we laid a solid foundation for building partnerships, sharpening the purpose of our network and defining the focus of our work,” says Felice Stadler, director of NWF’s climate and energy programs. Participants also met with their congressional representatives to discuss issues important to their communities.

“About midway through the summit, I realized that gathering was special for me and for our movement,” says Joaquin Sanchez, an organizer with Youth for Climate Justice. “The summit presented an opportunity to engage in a conversation with like-minded leaders and to think creatively about new ways to protect the environment.”