Working with partners, NWF has launched an effort to restore wild bison to a key piece of Montana range 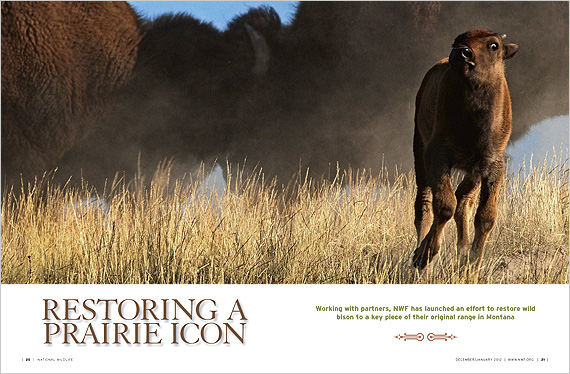 THE STORY HAS BEEN TOLD MANY TIMES: In little more than a decade during the late 1800s, market hunters all but wiped out the continent’s largest land mammal, the American bison, killing the animals by the thousands for their hides, meat and, all too often, simply for the thrill of seeing them hit the ground. By the beginning of the 20th century, a species of tremendous ecological, cultural and economic importance had vanished from the prairie and survived only in small captive herds and a remnant population in the mountains of Yellowstone National Park.

Sadly, that wasn’t the end of the story. These commercial hunters quickly shifted their aim to other native wildlife, destroying huge populations across the West of elk, pronghorn, moose, deer and bighorn sheep. That’s when concerned Americans took steps to stop the carnage.

“Over the last 100 years, hunters and conservationists have done a tremendous job in this country of recovering elk, deer, pronghorn and other large mammals,” says NWF President Larry Schweiger. “Working primarily through state fish and wildlife agencies, we have restored most of our big-game populations—an incredible achievement. But we still have one major species to go, the American bison.” To help fill that gap, NWF has launched a new initiative to restore wild bison to an important part of their original range: the area in and around Charles M. Russell National Wildlife Refuge (CMR) in north-central Montana.

Sprawling across some 125 miles, with more than a half-million acres of nearly pristine short-grass prairie, the refuge straddles Fort Peck Lake, a massive reservoir on the Missouri River with 1,500 miles of shoreline. Because travel in the area is restricted only to designated routes, much of the landscape remains the same as when shooters killed the region’s last native bison more than a century ago. CMR also encompasses the 56,000-acre UL Bend National Wildlife Refuge, much of which is a federally designated wilderness area. 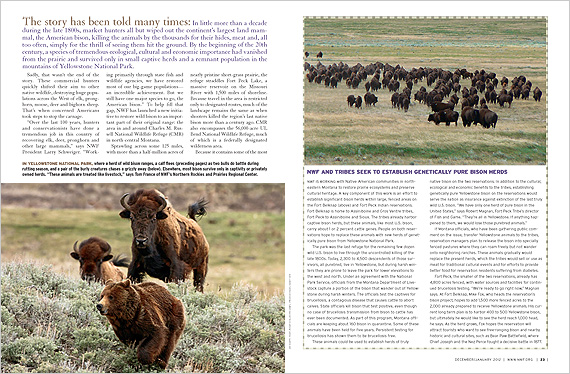 Because it contains some of the most productive and wildest habitat in the West, CMR has long been a focal point of conservation efforts by NWF and its affiliate, the Montana Wildlife Federation. Managed by the U.S. Fish and Wildlife Service (FWS), the refuge is home to nationally renowned populations of elk, pronghorn and mule deer and a wide range of other species, from bighorn sheep to black-footed ferrets. “If we are going to restore bison to their native prairie habitat anywhere in North America, this is the best place to do it,” says Tom France, executive director of the NWF Northern Rockies and Prairies Regional Center in Missoula.

Domestic bison are common throughout the United States, numbering some 430,000. They generally exist, with a few exceptions, in captivity or as privately owned herds. No wild bison herds exist today in their original prairie habitat in this country. “It’s the only native wildlife species that isn’t permitted to roam freely within its natural range,” says France. “These animals are treated like livestock.”

In promoting bison restoration, NWF is working with other conservation groups and several Indian tribes with large reservations near CMR. The Federation’s efforts also dovetail with work that the American Prairie Foundation (APF) is doing nearby. The nonprofit group has purchased or leased about 120,000 prairie acres adjacent to CMR and established a small herd of genetically pure bison that could provide stock for the refuge or other areas. APF Managing Director Dick Dolan says bison restoration “is part of a larger vision of prairie restoration.”

While APF has been purchasing private lands adjacent to CMR, NWF has been developing agreements with ranchers who hold cattle grazing permits on the refuge. These agreements, which only permit livestock grazing if it is needed to help improve wildlife habitat, are a critical part of creating space for bison. 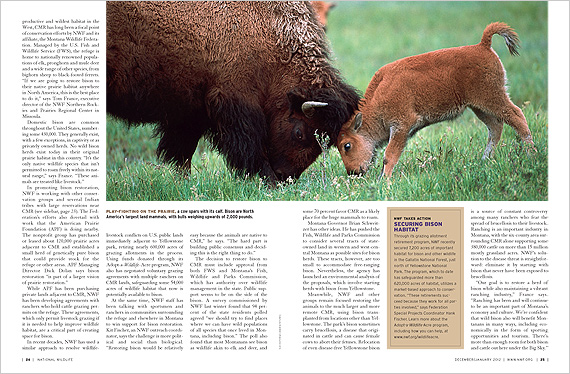 At the same time, NWF staff has been talking with sportsmen and ranchers in communities surrounding the refuge and elsewhere in Montana to win support for bison restoration. Kit Fischer, an NWF outreach coordinator, says the challenge is more political and social than biological. “Restoring bison would be relatively easy because the animals are native to CMR,” he says. “The hard part is building public consensus and deciding this is the right thing to do.”

The decision to restore bison to CMR must include approval from both FWS and Montana’s Fish, Wildlife and Parks Commission, which has authority over wildlife management in the state. Public support seems to be on the side of the bison. A survey commissioned by NWF last winter found that 94 percent of the state residents polled agreed “we should try to find places where we can have wild populations of all species that once lived in Montana, including bison.” The poll also found that most Montanans see bison as wildlife akin to elk and deer, and some 70 percent favor CMR as a likely place for the huge mammals to roam.

Montana Governor Brian Schweit-zer has other ideas. He has pushed the Fish, Wildlife and Parks Commission to consider several tracts of state-owned land in western and west-central Montana as possible sites for bison herds. These tracts, however, are too small to accommodate free-ranging bison. Nevertheless, the agency has launched an environmental analysis of the proposals, which involve starting herds with bison from Yellowstone.

Meanwhile, NWF and other groups remain focused restoring the animals to the much larger and more remote CMR, using bison transplanted from locations other than Yellowstone. The park’s bison sometimes carry brucellosis, a disease that originated in cattle and can cause female cows to abort their fetuses. Relocation of even disease-free Yellowstone bison is a source of constant controversy among many ranchers who fear the spread of brucellosis to their livestock. Ranching is an important industry in Montana, with the six-county area surrounding CMR alone supporting some 380,000 cattle on more than 15 million mostly grassland acres. NWF’s solution to the disease threat is straightforward: eliminate it by starting with bison that never have been exposed to brucellosis.

“Our goal is to restore a herd of bison while also maintaining a vibrant ranching industry,” France says. “Ranching has been and will continue to be an important part of Montana’s economy and culture. We’re confident that wild bison also will benefit Montanans in many ways, including economically in the form of sporting opportunities and tourism. There’s more than enough room for both bison and cattle out here under the Big Sky.”

NWF is working with Native American communities in northeastern Montana to restore prairie ecosystems and preserve cultural heritage. A key component of this work is an effort to establish significant bison herds within large, fenced areas on the Fort Belknap and Fort Peck Indian reservations. Fort Belknap is home to Assiniboine and Gros Ventre tribes, Fort Peck to Assiniboine and Sioux. The tribes already harbor captive bison herds, but these animals, like most U.S. bison, carry about 1 or 2 percent cattle genes. People on both reservations hope to replace these animals with new herds of genetically pure bison from Yellowstone National Park.

The park was the last refuge for the remaining few dozen wild U.S. bison to live through the uncontrolled killing of the late 1800s. Today, 2,300 to 4,500 descendents of those survivors, all purebred, live in Yellowstone, but during harsh winters they are prone to leave the park for lower elevations to the west and north. Under an agreement with the National Park Service, officials from the Montana Department of Livestock capture a portion of the bison that wander out of Yellowstone during harsh winters. The officials test the captives for brucellosis, a contagious disease that causes cattle to abort calves. State officials kill bison that test positive, even though no case of brucellosis transmission from bison to cattle has ever been documented. As part of this program, Montana officials are keeping about 160 bison in quarantine. Some of these animals have been held for five years. Persistent testing for brucellosis has shown them to be brucellosis free.

These animals could be used to establish herds of truly native bison on the two reservations. In addition to the cultural, ecological and economic benefits to the tribes, establishing genetically pure Yellowstone bison on the reservations would serve the nation as insurance against extinction of the last truly wild U.S. bison. “We have only one herd of pure bison in the United States,” says Robert Magnan, Fort Peck Tribe’s director of Fish and Game. “They’re all in Yellowstone. If anything happened to them, we would lose those purebred animals.”

If Montana officials, who have been gathering public comment on the issue, transfer Yellowstone animals to the tribes, reservation managers plan to release the bison into specially fenced pastures where they can roam freely but not wander onto neighboring ranches. These animals gradually would replace the present herds, which the tribes would sell or use as meat for traditional cultural events and for efforts to provide better food for reservation residents suffering from diabetes.

Fort Peck, the smaller of the two reservations, already has 4,800 acres fenced, with water sources and facilities for continued brucellosis testing. “We’re ready to go right now,” Magnan says. At Fort Belknap, Mike Fox, who heads the reservation’s bison project, hopes to add 1,500 more fenced acres to the 2,000 already prepared to receive Yellowstone animals. His current long-term plan is to harbor 400 to 500 Yellowstone bison, but ultimately he would like to see the herd reach 1,000 head, he says. As the herd grows, Fox hopes the reservation will attract tourists who want to see free-ranging bison and nearby historic and cultural sites, such as Bear Paw Battlefield, where Chief Joseph and the Nez Perce fought a decisive battle in 1877.

Through its grazing allotment retirement program, NWF recently secured 7,200 acres of important habitat for bison and other wildlife in the Gallatin National Forest, just north of Yellowstone National Park. The program, which to date has safeguarded more than 620,000 acres of habitat, utilizes a market-based approach to conservation. “These retirements succeed because they work for all parties involved,” says Federation Special Projects Coordinator Hank Fischer. Learn more about the Adopt-a-Wildlife-Acre program, including how you can help, at www.nwf.org/wildlifeacre.