I've grown up fishing in Tennessee and like many people, believe it to be one of the best places to fish in the United States. But our waters are threatened whether it's invasive species impacting the size and quantity of my catch or just the beauty and variety of aquatic life that are diminishing.

Tennessee is actually the most biodiverse inland state. But this biodiversity is at risk. In fact, the New York Times recently issued a map that shows areas of the United States most at risk for biodiversity loss. It's not good news for sports men and women in Tennessee, who care deeply about the health of our waters and fund so much of the conservation work in our state. Just one aquatic species at risk? The laurel dace (Chrosomus saylori)--an endangered and rare freshwater minnow native to Tennessee.

This fish was first collected by Tennessee Valley Authority ichthyologist Charles Saylor in 1976. It went unnoticed for years due to its similar appearance to nonbreeding individuals of the southern redbelly dace (Chrosomus erythrogaster).

Saylor donated his specimens to the University of Tennessee’s Research Collection of Fishes in 1990. In 2001 the laurel dace was recognized as its own species.

Laurel dace have historically been known to be found in a limited number of streams on the Cumberland Plateau. This makes it incredibly rare and unique to Tennessee.

Over the decades, poor habitat management and natural events such as drought have slowly dwindled the streams the fish can thrive in.

In 2011, the minnow was federally listed as endangered.

Currently, there is not adequate funding for the management of nongame species—such as the laurel dace—in Tennessee. This makes it difficult to plan and implement long-term conservation work needed to improve wildlife populations.

With the cost to taxpayers averaging $19 million to develop a single recovery plan for any species listed as threatened or endangered, it makes strong financial sense that these funds be made available to prevent and stop the decline of these critical species. This will allow action to be taken before populations shrink and more drastic steps are needed.

If passed, Tennessee will receive an estimated $25.6 million to work on projects and research to support the more than 1,400 plant and animal species that are identified in the State Wildlife Action Plan as being in greatest need of conservation.

This includes the laurel dace.

John “J.W.” Worthen (pictured below with a rainbow trout) is the Director of Programs for the Tennessee Wildlife Federation. An independent nonprofit, Tennessee Wildlife Federation brings together hunters, anglers, wildlife watchers, and other outdoor enthusiasts committed to conserving our state’s wildlife and natural resources. We take a full-spectrum approach to conservation that can be seen in our policy work and strategic blend of programs. 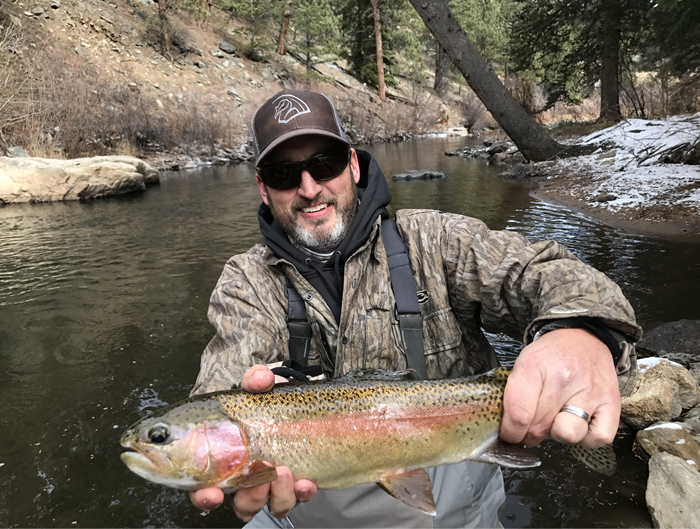