Recommendation rolls back pro-development position from the Reagan era 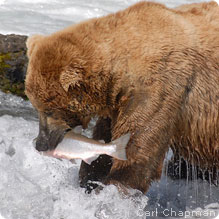 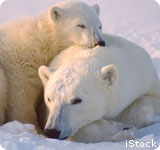 In a significant moment for the Arctic National Wildlife Refuge, today the Obama administration became the first in history to make a Wilderness recommendation for the Refuge’s Coastal Plain as part of its preferred alternative in its final Comprehensive Conservation Plan and Wilderness Review.

“The coastal plain’s wildlife, wilderness, adventure-oriented recreation, and Alaska Native cultural and subsistence values are incomparable, and it deserves the strongest protection possible,” said Collin O’Mara, president and chief executive officer of the National Wildlife Federation. “The recommendation by scientists and wildlife experts at the US Fish and Wildlife Service for a Wilderness designation for the coastal plain of the Arctic National Wildlife Refuge holds the promise of protecting a vast range of species including musk oxen, caribou, polar bears, and grizzly bears, as well as hundreds of thousands of birds that gather each year from around the globe.”

Through this recommendation, the U.S. Fish and Wildlife Service recognizes the value of the Arctic Refuge as a remarkable, wilderness quality ecosystem that supports a full spectrum of sub-arctic, arctic and marine habitats. The Refuge’s Coastal Plain in particular provides crucial habitat for muskoxen, wolves, migratory birds, caribou, mother polar bears and their cubs, and since time immemorial has provided sustenance and sustained the culture of the Gwich’in and Inupiat people.

Since its creation, support for the Arctic Refuge has been diverse and nationwide. During the public comment period for the CCP, the Fish and Wildlife Service received more than 1 million comments in support of Wilderness for the Arctic Refuge and in opposition to oil and gas exploration and development. Alaskans showed overwhelming support at public hearings and sent thousands of comments including from 100 businesses across the state from Kaktovik to Juneau.  Furthermore, support for the Refuge over the years has been bipartisan and today, members from both parties continue to come together to safeguard our natural heritage.
Conservation, religious, tribal organizations and citizens from across the country who have stood strong to protect this piece of America’s Arctic coast are celebrating USFWS’s positive, proactive decision to move forward with additional protections to the Arctic Refuge’s Coastal Plain.  Americans value all elements of Wilderness, including rich opportunities for solitude and primitive recreation. The Arctic Refuge is one of the only places on earth where large herds of caribou are free to roam, similar to the days when herds of buffalo roamed the West. We must protect this iconic American wilderness for the future.

This recommendation is a critical step toward a congressional Wilderness designation and establishes the Obama administration’s support for Wilderness protection for the Coastal Plain – reversing the Reagan administration position in favor of oil and gas development. This important administrative plan for the Arctic Refuge will guide management decisions for at least the next 15 years, and marks the first time the pendulum has swung in the direction of additional protections for the Refuge since 1980. The next step is for the president to transmit his Wilderness recommendation to Congress, and for Congress to pass Wilderness legislation.

For thousands of years, the Gwich’in people have regarded the Coastal Plain of the Arctic Refuge as “Iizhik Gwat’san Gwandaii Goodlit” or “The Sacred Place Where Life Begins,” because it has been the most frequently used birthing and nursery grounds for the migratory Porcupine caribou herd. This caribou herd is the foundation for the social, economic and spiritual fabric of the lives of the Gwich’in people.

“This is great news for the Gwich’in people. The Fish and Wildlife report agrees with our Chiefs that the caribou birthplace on the Arctic Refuge Coastal Plain must be protected for future generations.  This is a human rights issue.  Oil development there would hurt the caribou and threaten the Gwich’in way of life. We ask the President to take the next step to permanent protection of this place we call “the Sacred Place Where Life Begins,” said Sarah James, Chair, Gwich’in Steering Committee.

“Our organization supports the strongest measures possible for protection of the Arctic National Wildlife Refuge due to our support for Gwich'in and Inupiat subsistence rights.  I also want to express my support as an Indigenous person residing within the borders of the Arctic National Wildlife Refuge, I am in agreement that this area should be preserved as wilderness. It represents 5 percent or less of the land that is at threat for exploitation on Alaska's North Slope. The oil companies have access to the rest, 95 percent of the Arctic Coast.  If the Refuge is preserved as wilderness, future generations of Inupiat will have part of our homeland preserved as it has always been.  All people within the United States and the world will know that our government cared enough to preserve part of the Arctic for all future generations and humanity as a whole,” said Robert Thompson, Inupiaq and Kaktovik Resident and Chairman of Resisting Environmental Destruction on Indigenous Lands.

“The Arctic National Wildlife Refuge is a national treasure. The 1989 Exxon Valdez oil spill in Prince William Sound is living proof of what can go wrong when we allow uncontrollable and irreversible development in our precious thriving wild places that provides sustenance and subsistence to our people and incomparable way of life here in Alaska,” said Dune Lankard, founder and president of Eyak Preservation Council.

“The Episcopal Church welcomes the Fish and Wildlife Service’s formal Wilderness recommendation for the Arctic Refuge’s Coastal Plain and commends the Administration for taking a critical step toward permanently protecting the ecological integrity of this sacred land. We support permanent Wilderness designation for the Coastal Plain both to conserve God’s creation and to safeguard the subsistence rights of our Gwich’in brothers and sisters. Now that the Administration has officially endorsed permanent protection for the Refuge, The Church calls on Congress to swiftly implement this Wilderness recommendation,” said Alexander D. Baumgarten, Director of Government Relations for The Episcopal Church

“This plan with its first-ever full Wilderness review and recommendation for the Coastal Plain provides a great opportunity to fulfill the vision of Alaskans who helped found the Arctic Refuge 50 years ago and many Alaskans today who are continuing to work ensure that the unique wildlife, wilderness, and subsistence values of the Arctic Refuge are protected for future generations,” said Pamela A. Miller, Arctic Connections.  “The 50-year-old Arctic Refuge is the only national wildlife refuge established specifically to preserve wilderness values and the whole refuge should be managed to uphold this purpose. This Wilderness recommendation is an important stepping stone towards designation of the Coastal Plain into the National Wilderness Preservation System.”

“This Wilderness recommendation has been a long time coming for the place where life begins for the Porcupine caribou herd and for many of America’s polar bears. It’s time to permanently protect the Coastal Plain in all its richness and diversity before it’s destroyed for short-term profit,” said Rebecca Noblin, Alaska Director, Senior Attorney, Center for Biological Diversity.

“After the Obama administration's nearly disastrous decision to allow Shell to move forward with Arctic drilling two summers ago, it's good to see the president take a step in the right direction,” said Elijah Zarlin, Senior Campaign Manager at CREDO. “If the President wants to stay true to his promise to protect our environment and climate, he needs to take areas off the table for fossil fuel development, not sell off pristine wilderness to the highest bidding dirty energy company.”

“The wildlife that makes its home in this pristine refuge depend on its preservation,” said Jamie Rappaport Clark, President of Defenders of Wildlife.  “With this announcement, the federal government has provided a long-overdue affirmation that the Arctic National Wildlife Refuge’s coastal plain is an irreplaceable natural area that deserves to be forever protected from development.”

“For more than 50 years, The U.S. Fish and Wildlife Service has done an outstanding job of managing the Arctic Refuge to protect its magnificent wildlife, habitat, and wilderness values.  They have taken the long-needed step of recommending formal Wilderness designation for its critical areas, especially the Coastal Plain.  The American people have clearly expressed their desires for such protection, and the comprehensive analysis conducted by the agency included this wilderness recommendation to preserve this unique gem for generations to come.  On behalf of the many volunteers who work closely with the U.S. Fish and Wildlife Service, we applaud their recommendations and foresight,” said David C. Raskin, President of the Friends of the Alaska National Wildlife Refuges.

“This is a big deal,” said Gene Karpinski, President, League of Conservation Voters. “Big Oil has long wanted to get its hands on the Arctic National Wildlife Refuge, but the scientists at the Fish and Wildlife Service have declared that this iconic American wilderness is just too special to drill in.  We wholeheartedly agree and celebrate this announcement by the Obama administration.”

“The Coastal Plain is the biological heart of the Arctic National Wildlife Refuge. Let’s treat it that way,” said Audubon President and CEO David Yarnold. “That’s what this plan does, and that’s very good news for nearly 200 bird species, other wildlife, and future generations of Americans.”

“This is one of the last remaining places on the planet where enormous herds of Arctic caribou roam free, and where musk oxen, polar bears, wolves and grizzly bears can still thrive,” Houghton said. “Wilderness not only protects these Arctic wildlife species, but it also protects the cultural values of Alaska Natives and the conservation values shared by the vast majority of Americans.”

“The connection between people and place is absolutely vital no matter where you live, but nowhere is it more clear than in the Arctic Refuge. Preserving this place as wilderness is important for those of us who have been there, for those that rely on it, but also for those who may never get to visit as an inspiration for what's possible.” – Rue Mapp, founder of Outdoor Afro.

“The Coastal Plain is the wild heart of the Arctic National Wildlife Refuge, which is why Americans from all walks of life have advocated for its protection for more than half a century. This Wilderness recommendation at last recognizes the wonder and importance of the region for Native cultures, wildlife, and anyone seeking to experience one of America's last great wild places," said Michael Brune, Sierra Club Executive Director.

“By recognizing the incredible wilderness and habitat value for species such as polar bear and caribou, the Fish & Wildlife Service has taken a tremendous step to preserve one of the wildest places in North America – the Arctic Refuge – for future generations,” said Jamie Williams, president of The Wilderness Society. “Some places are simply too special to drill, and we are thrilled that a federal agency has acknowledged that the refuge merits wilderness protection.”