"We are grateful to the president for supporting wildlife and amazing outdoor experiences by permanently protecting this conservation jewel." 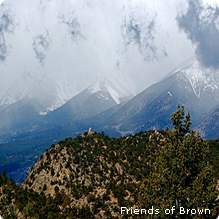 President Barack Obama’s plan to declare Colorado’s Browns Canyon a national monument means sportsmen and outdoor enthusiasts will be able to enjoy its spectacular landscapes, world-class whitewater rafting and hunting and fishing for generations to come.

"Browns Canyon is widely revered for its rafting, fishing, hunting, hiking, wildlife watching, and rugged backcountry," said Collin O’Mara, the National Wildlife Federation’s CEO and president, "This is why folks from all walks of life, lawmakers from both parties, and conservation leaders across Colorado, including our state affiliate the Colorado Wildlife Federation, have worked for more than two decades to protect it.  On behalf of the entire National Wildlife Federation, we are grateful to the president for supporting wildlife and amazing outdoor experiences by permanently protecting this conservation jewel."

Browns Canyon, about 140 miles southwest of Denver, is known nationwide for whitewater rafting on the Arkansas River. The Colorado River Outfitters Association said recreation on the river generated nearly $56 million in economic benefits in 2013. The area’s gulches, rocky cliffs, forests and meadows provide habitat for mule deer, elk, black bears, bighorn sheep, mountain lions, eagles and falcons. A 102-mile stretch of the Arkansas is classified as Gold Medal trout waters, based on the quality and quantity of fish. Hikers in Browns have great views of some of Colorado’s most dramatic Fourteeners – mountains more than 14,000 feet in elevation.

"We’ve been waiting a long time for this. Making Browns Canyon a national monument has overwhelming support from the public, especially from people who live the closest to it. We know what we have and we don’t want to lose it," said Bill Dvorak, NWF’s public lands organizer in Colorado and a longtime rafting and fishing guide on the Arkansas River.

News that Obama will proclaim Browns Canyon a national monument this week follows a recent public meeting in Salida that drew about 700 people. Former Sen. Mark Udall hosted the meeting in December so federal officials could gauge support for protecting Browns. Udall, Sen. Michael Bennet and Gov. John Hickenlooper asked Obama to use his executive authority after Udall’s bill to establish a monument stalled in Congress.

"Presidents since Teddy Roosevelt have used the Antiquities Act to conserve some of our country’s most stunning landscapes and important ecosystems. The Grand Canyon, Chaco Canyon and Muir Woods are just a few of the places set aside by presidents. We can add Browns Canyon to the list of American treasures that showcase the best of the natural resources that make us the envy of other countries around the world,” said Kent Ingram, Colorado Wildlife Federation president.