Be a Butterfly Hero. Submit a Photo and Help Save the Monarch Butterfly 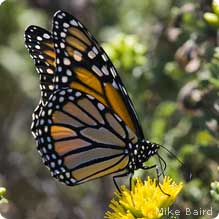 NWF’s new Butterfly Hero Campaign, launches March 4, 2015, and asks people to submit a photo of themselves making the international sign language sign of the butterfly on NWF’s Butterfly Heroes website, at: www.nwf.org/butterflyheroes. By taking the pledge, participants will be mailed a free kit (while supplies last) and if entered by May 15, are eligible for a chance to win a trip for four to Walt Disney World. Botanical Interests is supporting the campaign with a donation of native milkweed seeds.

"We can each be a part of saving the monarch butterfly. The simple act of planting milkweed with your family provides monarchs with a place to lay their eggs, and helps ensure this iconic species has a future," said David Mizejewski, naturalist with the National Wildlife Federation.

Pollinators, of which the monarch butterfly is a part of, are mostly responsible for all the food that we eat. While monarchs are found across the United States — as recently as 1996 numbering some 1 billion — their numbers have declined by approximately 90 percent in recent years, a result of numerous threats, particularly loss of habitat due to agricultural practices, development and cropland conversion. Degradation of wintering habitat in Mexico and California has also had a negative impact on the species.

Monarch butterflies spend winter in Mexico or Central and Southern California, and then migrate north in spring into neighborhoods across the United States. They need places to rest their wings, drink flower nectar, and lay their eggs on milkweed which their baby caterpillars eat. Monarchs are losing this habitat, and without it the Monarch cannot survive. NWF is asking that people across the United States to plant milkweed to preserve the monarch’s habitat. Learn more about NWF’s monarch protection efforts at NWF.org/Monarchs and http://www.nwf.org/pollinators.

The brand new Butterfly Heroes Campaign is organized by NWF and is a part of a number of programs designed to inspire people to get outdoors, help wildlife, and become more aware of the nature in their neighborhood and community. NWF has worked to connect people with nature for decades, inspiring people through Ranger Rick magazine, working with educators to get kids greening their schools and learning outdoors.