"Our nation’s wildlife, fish, healthy waters, clean air, and public lands are a birthright of all Americans." 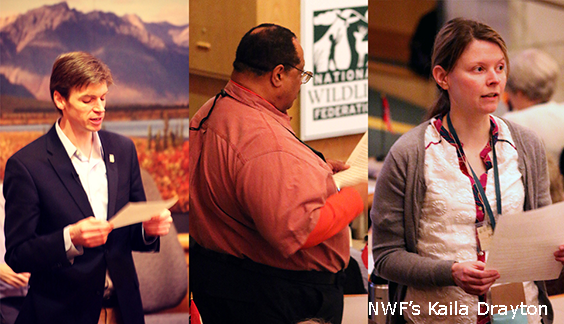 At its 79th Annual Meeting, affiliates of the National Wildlife Federation, one of America’s oldest and largest wildlife conservation and education organizations, have ratified a series of resolutions, including a “We Believe” statement renewing NWF’s pledge to protect bedrock conservation values.

“The National Wildlife Federation was founded in 1936 by local conservation groups from across the nation under the premise that all who love wildlife from hunters, anglers, and hikers to gardeners, birders, and farmers must band together to defend and enhance our natural resources and our outdoor heritage.  Our ‘We Believe’ statement defines a 21st century vision of what unites us as wildlife conservationists from every walk of life and every corner of the nation: ‘Our nation’s wildlife, fish, healthy waters, clean air, and public lands are a birthright of all Americans,’” said Collin O’Mara, president and chief executive officer of the National Wildlife Federation. “As we work to rebuild America’s Conservation Field Army and begin our 80th anniversary, the entire National Wildlife Federation, including our 49 state and territorial affiliates and our nearly 6 million supporters, stand unified in steadfast support of these truly American values.”

America’s experience with cherished landscapes and wildlife has helped define and shape our national character and identity for generations. Protecting these natural resources is a cause that has long united Americans from all walks of life and political stripes. To hunters, anglers, hikers, birders, wildlife watchers, boaters, climbers, campers, cyclists, gardeners, farmers, forest stewards and other outdoor enthusiasts, this conservation ethic has evolved and is now integral to our heritage and fundamental to the very pursuit of happiness enshrined at the founding of this great country. It is this heritage that we will defend and pass on to our children. And for all Americans, whether they venture into nature or not, whether they live in the middle of our most densely populated cities or in small towns or rural communities or somewhere in between, we all depend on clean air, clean water, and a healthy environment. Our ties to the land provide spiritual sustenance and a path to virtue; they suggest a perfection in nature that exceeds anything humans can create. As Americans we share a sacred duty and obligation to protect and build upon our conservation heritage for the sake of native wildlife, ourselves, our neighbors, and most of all for future generations.

To this end, we believe…

Our nation’s wildlife, fish, healthy waters, clean air, and public lands are a birthright of all Americans.
Government has a sacred duty to conserve and steward these public trust resources for all, including future generations, using the best available science and providing robust financial resources.
Conservation on private land plays an essential role in supporting healthy fish and wildlife populations and providing and connecting their habitat.
Our nation’s healthy lakes, rivers, streams, wetlands, marine and coastal waters, forests, and other wild lands are vital to our public health, economy, wildlife, and quality of life.
Diverse and abundant wildlife habitat is essential for urban, suburban and rural communities.
We all have a right to enjoy sustainable and responsible outdoor recreation including: hunting, fishing, camping, birding, wildlife watching, hiking, climbing, swimming, boating, and gardening.
Our nation must address climate change, continue moving toward cleaner energy sources, and make wildlife habitat and communities more resilient to such change.
We have a national responsibility to get our children outdoors, for their health, their intellectual enrichment, their daily happiness, and to instill a conservation ethic in future generations.
As the National Wildlife Federation – a nationwide federation of state and territorial affiliate organizations and nearly six million members and supporters across the country:

We embrace a national responsibility to conserve wildlife and wild places wherever they may be and to broaden the conservation movement so that it encompasses America in all its diversity.
We dedicate ourselves to share respectfully with our neighbors our understanding and appreciation of our natural environment, of conservation, of cultural preservation, and of America’s outdoor heritage.
We commit to nurturing with resources, attention, and talent a diverse national conservation movement that inspires local, state, and national action and engagement on issues that transcend political boundary.
And we fully accept our profound responsibility to speak up, to advocate, and to engage on behalf of America’s wildlife.
Affiliate Resolutions Adopted


The Federation is unique among conservation groups with a highly diverse federation of affiliates – ranging from ardent hunters and anglers to more progressive environmental groups – which come together at our annual meeting to debate resolutions proposed by the affiliates on pressing wildlife issues. The Federation uses resolutions to pursue common conservation goals. Conservation policy resolutions adopted at the Annual Meeting inform other institutions, the press, and the public of the Federation’s position on various issues.

Recommending wild bighorn sheep be kept separate from domestic livestock to minimize the spread of disease
Supporting the efforts of state, federal and private entities to conserve both sage-grouse and sagebrush habitats
Urging President Obama and/or Vice President Biden to attend the 2016 World Conservation Congress for the purpose of demonstrating U.S. leadership in the international conservation arena
Supporting implementation of the Association of Fish and Wildlife Agencies’ North American Conservation Education Strategy by public and private schools, conservation interests, and informal education institutions at all levels to encourage outdoor skill development in young people across America.
Increasing and, in the long term, sustaining populations of pollinators such as bees as well as butterflies and other species
Registering the Federation’s formal opposition to sulfide mining within the watershed of the Boundary Waters Canoe Area Wilderness in Minnesota
Calling for establishment of biodiversity, natural resource and habitat protections, carbon reductions for forest bioenergy used for electricity and heat generation; and a moratorium on the use of high-risk invasive species for bioenergy
Reaffirming support for U.S. Fish and Wildlife Service efforts to declare Western Great Lakes gray wolves as recovered and ready to be delisted from the Endangered Species Act
Calling for improvements to the way in which species that have recovered according to sound scientific wildlife management are de-listed under the Endangered Species Act