Land-use changes have caused the loss of over seven million acres of grasslands, wetlands and forests 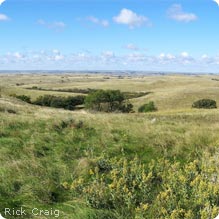 Recent land-use changes across the nation have caused the conversion of 7.34 million acres of grasslands, wetlands and forests to cropland, while 4.36 million acres of cropland were taken out of production according to a new report by the University of Wisconsin-Madison. Cropland Expansion Outpaces Agricultural and Biofuel Policies in the United States details the extent and location of land-use changes during the build-out of the corn ethanol industry.
The first crop and spatially-explicit nationwide assessment of its kind, the report uses remote sensing and other data to assess nationwide land-use changes between 2008 and 2012 and discusses the policy implications of such changes. The new, peer-reviewed study was published today in the journal of Environmental Research Letters and addresses debate on whether the recent boom in demand for common biofuel crops and other agricultural policies have led to the carbon-emitting conversion of natural areas.

"We realized there was remarkably limited information about how croplands have expanded across the United States in recent years," said Tyler Lark, lead author and PhD student at the University of Wisconsin-Madison. "Our results are surprising because they show large-scale conversion of new landscapes, which most people didn’t expect."

The report finds that 5.7 million acres of grasslands, including native prairie, planted pasture, CRP and more, were the largest source of converted cropland, with 77 percent of new annual cropland coming from these perennial grass covers. These lost grasslands are now emitting significant quantities of carbon and no longer providing critical wildlife habitat. Grasslands are one of the fastest declining ecosystems in North America, with less than 10 percent of native grasslands left on the landscape. Of biggest concern, the report finds that an area of undisturbed prairie and range the size of the state of Delaware was converted to cropland.  Once grasslands are plowed, the full diversity of the ecosystem can never again be restored.  This loss is especially troubling as wildlife species that depend on this ecosystem, from the Monarch Butterfly to grassland nesting bird species, are in steep decline.

The authors found that conversion to corn and soy alone may have emitted as much carbon dioxide into the atmosphere as 34 coal-fired power plants operating for one year or 28 million more cars on the road.

"The study provides much needed information on the environmental impacts the expansion of cropland is causing." said Julie Sibbing, Senior Director of Agriculture and Forestry programs at the National Wildlife Federation. "It’s also concerning that most of the land converted to cropland was not likely well suited for agriculture, which could lead to  increased erosion, flooding and drought, while millions of acres of cropland were abandoned, many of which should never have been brought into crop production in the first place. Our federal biofuels and agricultural policies are obviously broken and it is costing the taxpayers billions."

Since the passage of the Renewable Fuel Standard 2 (RFS2) in 2007, environmental impacts of corn ethanol production have been hotly debated. The RFS2 mandated the greatly expanded use of biofuels as part of the nation’s fuel supply, and was designed to reduce greenhouse gas emissions from liquid transportation fuels. The regulation contains protections against the conversion of forests, wetlands and prairies for feedstock production, but have not been enforced to their full potential. The results of the study may guide policymakers as Congress debates whether to reform or repeal parts of the RFS2.

Other policy implications may also be involved with the results of the study. The Sodsaver provision of the 2014 Farm Bill currently reduces federal subsidies to farmers who grow on previously-uncultivated land, yet the provision only applies in six Northern Plain states. However, results from the study show that roughly two-thirds of the previously-uncultivated lands converted to crop production have been in states not covered by the Sodsaver provision.