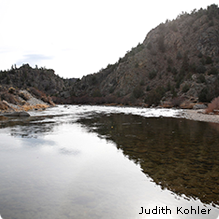 This week, the House of Representatives will vote on two pieces of legislation that could hinder the ability to protect coldwater fisheries, indispensable waterfowl habitat, and drinking water for one in three Americans. A bill introduced by Pennsylvania Representative Bill Shuster (H.R.1732) and a harmful policy rider in the “Energy and Water Development and Related Agencies Appropriations Act” (H.R.2028) would derail a deliberative rulemaking effort, which hunters and anglers everywhere are counting on to clarify Clean Water Act protections for wetlands and headwater streams.

“These two bills represent an attempt to ignore the wishes of sportsmen and snatch this opportunity from us at the eleventh hour—just weeks away from a final rule,” says Jimmy Hague, director of the Center for Water Resources at the Theodore Roosevelt Conservation Partnership, one of the more than 200 hunting, fishing, and sporting groups from across the country that have asked the Environmental Protection Agency and U.S. Army Corps of Engineers to take more action to protect wetlands and headwater streams. “Kicking the can down the road, without even seeing the final rule, would do a complete disservice to the hunters, anglers, farmers, and other stakeholders who submitted more than one million comments to improve the proposed rule—comments which have made an impact. Congress should reserve judgment until we can evaluate that impact.”

“Trout Unlimited strongly supports the Clean Water Act rule because it will ensure protection of millions of miles of headwaters streams and wetlands, which are critically important to the health of downstream waters and fish and wildlife habitat,” says Steve Moyer, Trout Unlimited’s vice president of government affairs. “Anglers know that better habitat means better fishing, and better fishing helps local economies across the nation that depend on recreation dollars. Congress needs to honor the public comments of hundreds of thousands of sportsmen and other Americans who have participated in the rulemaking process.”

The current confusion over the Clean Water Act began in 2001—nearly 15 years ago. Since then, the legal issues have been hashed out; the science has been analyzed, peer-reviewed, and compiled; and the public and key stakeholders have weighed in. Simply put, the agencies have all the information they need to make an informed decision, and delays are unnecessary. “We hear a lot of talk in Washington about doing the people’s business and cutting red tape. Yet, with misplaced water bills scheduled for consideration this week, the House is doing just the opposite,” says Scott Kovarovics, executive director of the Izaak Walton League. “Although Americans have spoken loudly and clearly in favor of protecting clean water and healthy habitat, the House would block progress and drown EPA and the Army Corps in a sea of wasteful red tape. The constructive course is to vote these bills down and act now to restore badly needed protections for streams, wetlands, and other waters nationwide.”

“A vote to block the Clean Water Rule is a vote against restoring protections to nearly two-thirds of America’s streams and 20 million acres of wetlands left vulnerable by ambiguous court decisions,” says Jan Goldman-Carter, senior manager of wetlands and water resources for the National Wildlife Federation. “There’s nothing ambiguous, however, about the support of hunters, anglers, and people across the country for clean, safe water for their communities, farms, fish, and wildlife. A vote to derail the process already under way is a vote against all of us.”

Learn more about NWF's efforts in protecting our waters.