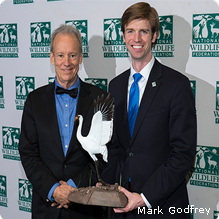 The National Wildlife Federation is honoring William McDonough of Charlottesville, VA as the recipient of NWF’s 2015 J.N. “Ding” Darling Conservation Award. The award is given to outstanding individuals who have made great progress in the environmental movement and continue to innovate, inspire and leave a legacy within the environmental world. McDonough will receive the award on Thursday, May 14, 2015 at NWF’s Conservation Achievement Awards Gala.

“Throughout his careers, William McDonough has demonstrated time and time again that economic prosperity and conservation progress can and must go hand. His vision of sustainability has shaped everything from Nike to NASA, from the Ford Motor Company to the U.S. Postal Service,” said Collin O’Mara, president and chief executive officer of the National Wildlife Federation. “His work will literally live on for generations to come as green roofs turn lifeless space into thriving wildlife habitat and other building features cut carbon pollution and improve water quality.”

Known as the pre-eminent voice for ecologically intelligent design, McDonough is a globally recognized designer, thought leader and sustainable growth pioneer. With more than 40 years in the field, he has defined the principles of the sustainability movement by creating its seminal buildings, products, texts and enterprises and preparing the ground for its widespread growth.

McDonough’s first major project featured designing the first “green office” in New York for the Environmental Defense Fund and he has since then earned the reputation for being “the leading environmental architect of our time,” establishing many of the principles and practices that are used today to define sustainable design. Time also named him “Hero of the Planet” for leading the architectural movement to use sustainable-themed designs in buildings.

McDonough is the architect of NASA’s Sustainability Base, Ford’s River Rouge Plant in Dearborn, MI, and other flagships of sustainable design. He is the co-creator of Cradle to Cradle, a global standard for the design of safe, healthy products. He spends time as a business strategist for leading global companies and is an advisor to well-known organizations like the United Nations, the Ministry of Science and Technology of the People’s Republic of China, the Clinton Global Initiative and the World Economic Forum. McDonough authored many industry-leading publications like The Hannover Principles: Design for Sustainability and is co-author of the widely influential Cradle to Cradle: Remaking the Way we Make Things and The Upcycle: Beyond Sustainability – Designing for Abundance.

McDonough resides today in Charlottesville, VA where he serves as a professor of business administration and alumni research professor to the University of Virginia. McDonough Braungart Design Chemistry (MBDC), a groundbreaking design chemistry firm co-founded by McDonough is also based in Charlottesville.

The National Wildlife Federation Conservation Achievement Awards have been presented annually since 1965. Nominations are received from conservationists and the general public, with winners selected by NWF’s board of directors. Previous honorees have included Jimmy Carter, Arnold Schwarzenegger, Al Gore, Robert Redford, and Stuart Udall.