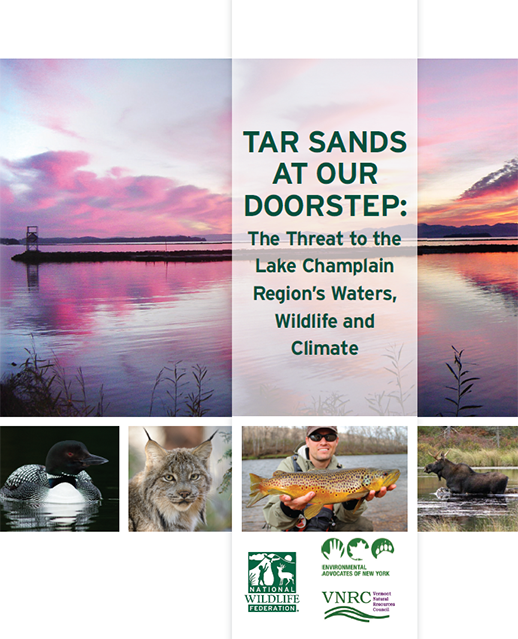 Lake Champlain and the surrounding region are at risk from oil spills and explosions and, given inadequate safety protections, an immediate moratorium on tar sands transportation is needed to protect communities and wildlife, according to a new report issued today by the National Wildlife Federation, Environmental Advocates of New York and Vermont Natural Resources Council. Tar Sands at Our Doorstep: The Threat to the Lake Champlain Region’s Waters, Wildlife and Climate examines industry plans to turn northern New England and New York– a region known for its leadership in reducing pollution, protecting wildlife, improving public health and growing a clean energy economy – into a major transportation corridor of one of the dirtiest fossil fuels on earth, tar sands oil from Alberta. In the meantime, a real and present danger exists to Lake Champlain from approximately 44 million gallons of crude oil – mostly volatile "Bakken" crude – being shipped along the western shores of Lake Champlain. Recent oil disasters in places like Santa Barbara and Quebec document the grave danger posed by oil transport.

"It is critical that this region says no to playing Russian roulette with exploding death trains running alongside our precious Lake Champlain and bursting pipelines that cross over our pristine rivers and lakes," said Jim Murphy, Senior Counsel at National Wildlife Federation. "Our elected officials need to work together to immediately place a moratorium on oil rail shipments along Lake Champlain until unsafe tin can cars are banned and we make significant progress toward a clean energy future."

The report  documents the tar sands oil industry’s three-pronged attack to infiltrate the region with dirty, dangerous tar sands oil. The report highlights the impacts on one of the region’s most important natural resources, Lake Champlain, an international treasure often referred as the sixth Great Lake, and other critical habitats in the region.

As the report outlines, the oil industry is making moves to bring tar sands oil to the Northeast and Lake Champlain region in three ways

The Exxon-owned Portland Pipe Line Corporation has conducted a multi-year, well-funded lobbying and media effort to utilize its 64 year old pipeline that cuts through Vermont, New Hampshire and Maine to transport dirty tar sands oil. This pipeline currently transports conventional oil from Portland, Maine to Montreal.
Each week tens of millions of gallons of explosive crude oil roll along the western banks of Lake Champlain in thinly lined tank cars. This is part of an unprecedented 40-fold increase in oil-by-rail transport that has occurred with little oversight. The result has been a startling rise in spills and explosions, the most tragic of which destroyed the scenic downtown of Lac-Mégantic, Quebec and killed 47 people. Now industry is seeking permission to upgrade an off-loading facility in Albany, New York to be able to load polluting tar sands oil onto barges.
With an increasing amount of tar sands oil reaching refineries in New Brunswick and the Gulf Coast, more and more of this extremely high-carbon gasoline is ending up in the tanks of our cars. Tar sands derived fuel is up to 37% more polluting than regular gasoline on a well-to-wheel basis. Without action to keep this fuel out of the region, it could wind up supplying up to 18 percent of the area’s transportation fuel source by 2020, up from about just 1 percent today. This could wipe out regional pollution reduction gains.
"Industry is desperate to move tar sands oil through the Northeast because it needs market access to fulfil plans to triple extraction of this landlocked fuel source – a sticky, high carbon fuel strip mined and drilled from the pristine evergreen forests of Alberta," said Murphy. "With projects like the Keystone XL pipeline and the Canadian Northern Gateway pipeline stalled and in danger of being denied, industry is exploring all options to get tar sands oil to refineries and foreign markets."

“Governor Cuomo and the Department of Environmental Conservation have listened to the alarms sounded by citizens in communities up and down the Hudson and along the shores of Lake Champlain by requiring a full and comprehensive review of the impacts tar sands oil could have on our air, water, climate and public health,” said Conor Bambrick, Air and Energy Director at Environmental Advocates of New York commenting on the recent NY DEC decision to subject an industry plan to upgrade an off-loading facility that would allow for tar sands oil to loaded from trains onto barges to a full environmental review."

“Vermont has just passed a sweeping Lake Champlain cleanup bill to finally put us on a path to clean up this stunning natural asset, this public commons we all share,” said Jake Brown, Vermont Natural Resources Council’s Communications Director. “Imagine – we’d be throwing that all away if an oil train derails, dumping thousands upon thousands of gallons oil into the lake. We’ve come too far to have our hard work wiped out by an industry that’s focused like never before on forcing its product through to markets.”

"It is discouraging to watch millions of gallons of crude oil per day flowing through a national treasure such as the Adirondack Park," said Adirondack Council Executive Director William C. Janeway. "While this is a state-owned park, it is the largest park in the contiguous United States and it protects the largest temperate, deciduous forest on earth.  New York State regulators can't limit or control this oil traffic on their own, and so far the federal government won't.  Meanwhile, this park safeguards drinking water for millions of people who live in the Northeast and Canada -- some 188,000 people get their water directly from Lake Champlain.  An accident here would devastate clean water, wildlife, and public health far beyond the park's borders."

Tar Sands at our Doorstep: The Threat to the Lake Champlain Region's Waters, Wildlife and Climate