"Ash was a true conservation giant." 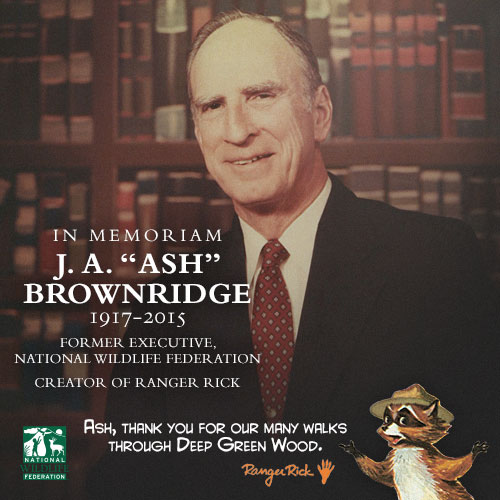 John Ashley Brownridge, a longtime National Wildlife Federation executive and creator of the beloved children’s character Ranger Rick, died Friday at the age of 98. Brownridge, also known as J.A. or "Ash", worked at the Federation for 33 years, also founding National Wildlife magazine, before retiring as vice president in 1982. As a direct result of Brownridge’s vision, more than 50 million Americans have been introduced to nature through the pages of Ranger Rick magazine—a conservation education legacy that remains strong today with more than a million current readers of Ranger Rick and Ranger Rick, Jr.

"Mr. Brownridge was not only among the most visionary conservationists of the 20th century, but his creation of Ranger Rick inspired an entire generation of conservation leaders for the 21st century, myself included," said Collin O’Mara, president and CEO of National Wildlife Federation. "We will remember Ash’s remarkable wildlife legacy through the millions of children who read Ranger Rick magazine and through the leaders across our nation from all different backgrounds and political stripes, who tell us they got their first window into wildlife from its pages. Ash was a true conservation giant."

Brownridge created the character Ranger Rick, who first appeared in The Adventures of Rick Raccoon, published in 1958. He wrote a second book, Ranger Rick and the Great Forest Fire, to accompany a children’s board game. Brownridge created the beloved Ranger Rick magazine in 1966 and continued writing monthly stories in the publication for several years. He also started National Wildlife Magazine in 1962, which for more than 50 years has illustrated important wildlife conservation work across the nation.

"Ash made such a real difference to the world through his work at the National Wildlife Federation. We figure there are more than 50 million adults walking around today who were Ranger Rick readers as kids," said Kevin Coyle, the National Wildlife Federation’s vice president of education and training. "He powered the Federation to a place of great impact in water quality, wetlands, public lands, agriculture reform and more. All these accomplishments would have been impossible had Ash not been such a smart and hard-working non-governmental agency leader."

Born in Toronto in 1917, Brownridge’s family moved to Larchmont, NY in 1923. A towering man of 6’6”, he was too tall to be inducted in the Army during World War II, so he served as a civilian British Liaison Officer in Washington, DC and was awarded the Kings Medal for Freedom in 1945. After a short stint with the United Nations, Brownridge started working at the National Wildlife Federation in 1949 as a bookkeeper, advancing to business manager, and eventually administrative vice president.

In his conservation efforts, Brownridge visited all 50 states, went across Canada and traveled to Japan, Africa, and oil sites in Point Barrow, Alaska and the North Sea. Under his leadership, National Wildlife Federation grew to be the largest non-profit conservation organization in the world and an international leader in the wise use of our natural resources.

As requested by the family, please consider giving a contribution for wildlife today in Browridge's memory.