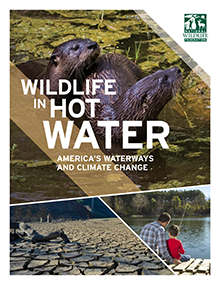 America’s waterways are already being stressed by climate change and President Obama’s Clean Power Plan is urgently needed to protect them, according to a new report by the National Wildlife Federation. Wildlife in Hot Water: America’s Waterways and Climate Change takes a comprehensive look at the science connecting global warming with changes to our lakes, rivers, streams and oceans like warmer water and more extreme weather, detailing impacts on the fish, wildlife and communities that depend on them.

Wildlife in Hot Water provides concrete examples of the bodies of waters that are suffering due to climate change, worsening wildlife habitat and threatening the drinking water for millions of Americans:


Toxic Algae Outbreaks: Lake Erie is once again suffering toxic algae outbreaks this summer fueled by increasing runoff from extreme weather events and warming water, one year after an outbreak shut down drinking water to nearly half a million people. To the west, scientists are directly connecting the dots between a massive, wildlife-killing Pacific algae outbreak and record-breaking warm water.
Warming Water and Drought: The Pacific Northwest’s salmon have been pushed to the brink by low water flows and warm temperatures, with the Yellowstone River’s trout also stressed. “As much as drought across the West is stressing people, it’s even more devastating for fish and wildlife, which can’t plan ahead or get water from far-away places,” says Doug Inkley, NWF senior scientist and lead author of the report. "They need our help."
Habitat Loss: Among the most productive habitats on Earth, coastal wetlands and estuaries are now threatened with the rise of sea levels, more intense and frequent coastal storms and altered runoff. In the central U.S., land loss and drought are threatening the "prairie pothole" region (Montana, North Dakota, South Dakota, Minnesota and Iowa). More than 300 migratory bird species nest or migrate through this area, facing the challenge of finding suitable areas to nest and feed.
"I have been forced to close Montana’s finest cold water fisheries to protect trout from excessive water temperatures and catastrophically low water flows. Climate change affects our family’s business and threatens one of the most sustainable, unique parts of Montana’s economy," said Dan Vermillion, a fly-fishing guide and chair of Montana’s Fish and Wildlife Commission. Vermillion took President Obama fly-fishing in 2009. "Equally importantly, it threatens one of the most important gifts we can give our children — cold, bountiful waters traversing valleys of healthy forests and grasslands. We must address the changing climate before it is too late. Future generations deserve nothing less."

The first five months of 2015 were the hottest on record, on pace to surpass 2014’s record year. A recent study published in the journal Nature finds an increasingly visible link between global warming and extreme weather, with warmer temperatures adding fuel to superstorms like Sandy.

Wildlife in Hot Water details the steps needed to confront climate change and protect our waterways: