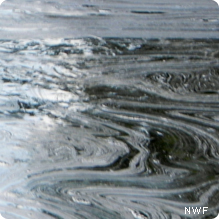 The National Wildlife Federation today filed a lawsuit against the U.S Department of Transportation for the agency’s failure for more than 20 years to protect people, fish, wildlife, and communities from oil pipeline spills in the nation’s inland waters, from the Great Lakes to the Yellowstone River.

The legal action carries nationwide implications: Due to the agency’s decades-long oversight failures, every U.S. oil pipeline that intersects a navigable water is operating illegally. The National Wildlife Federation is asking the court to order the Department of Transportation to implement the law by ensuring that every owner and operator of an oil pipeline in a navigable water complies with a spill response plan that has been reviewed and approved by the Department.

The National Wildlife Federation lawsuit comes as a series of catastrophic oil and gas pipeline disasters over the last five years have shed light on an industry whose track record of accidents, spills and disasters continues to go unchecked and unchanged due to insufficient legal protections for the public; absence of meaningful oversight by public officials; and lack of transparency by oil pipeline owners and operators.

“We hope today’s action will be a catalyst for long-overdue protections that benefit people, communities, and wildlife,” said Mike Shriberg, regional executive director of the National Wildlife Federation’s Great Lakes Regional Center. “The federal government needs to enforce the law to prevent oil pipeline disasters from fouling our water and threatening our communities and iconic places.”

In an acknowledgement that federal protections have been insufficient, last week the U.S. Department of Transportation’s Pipeline and Hazardous Materials Safety Administration, known as PHMSA, issued new rules to help prevent oil and gas pipeline accidents. The National Wildlife Federation’s lawsuit targets the lack of protections and rules if a pipeline accident occurs.

By law, pipeline owners and operators have to craft spill response plans that account for a worst possible oil spill, which the Oil Pollution Act defines as “the largest foreseeable discharge in adverse weather conditions.” NWF is suing the Department of Transportation because of the agency’s failure to issue regulations and approve response plans for pipelines in inland navigable waters.

The Department of Transportation has 60 days to respond to NWF’s complaint.
The lawsuit is the first legal action in the effort to protect the Great Lakes from two pipelines under the Straits of Mackinac where Lakes Michigan and Huron meet—and sheds light on the oversight failures by the Department of Transportation across the United States. The National Wildlife Federation has led the effort to highlight the risk posed by pipelines under the Great Lakes, including filming underwater footage of the pipelines in 2013 that showed them suspended over the lakebed, some original supports broken away (indicating the presence of corrosion), and some sections of the suspended pipelines covered in large piles of unknown debris—a wakeup call illustrating the urgent threat such oil pipelines pose in waters across the country.

The National Wildlife Federation is suing the Department of Transportation for failing to meet its obligations under the Oil Pollution Act. Enacted in 1990 following the Exxon Valdez oil spill disaster, the act prohibits the transportation of oil through pipelines on land or in the water, unless oil pipeline owners or operators receive government approval that they have safety plans that are adequate to respond to a worst-case oil spill.

But the U.S. Department of Transportation has never established regulations for—and has never given approval of—spill response plans for pipelines that that travel in, on, or under rivers, lakes, and other inland navigable waters, allowing oil pipeline owners and operators to operate without approved safety plans. The Department of Transportation’s failure to issue regulations implementing the oil spill response requirement or approve oil spill response plans has led to a state of affairs nationwide in which owners and operators of oil pipelines in, on, or under rivers, lakes, or other inland navigable waters are allowed to transport oil without a plan or, if a plan exists, without being required to follow it.

“The Department of Transportation’s failure to review or approve spill response plans is a huge oversight that has left communities and wildlife vulnerable to catastrophic oil spills,” said Neil Kagan, senior counsel for the National Wildlife Federation. “The Department of Transportation needs to act with urgency and purpose to provide the long-overdue protection Congress mandated in the Oil Pollution Act.”

Pipeline spills, leaks, and ruptures are a serious concern across the nation. Between 1995 and 2014 there have been 10,844 pipeline incidents causing 371 fatalities and 1,395 injuries and more than $6.3 billion in property damage, according to the Pipeline and Hazardous Materials Safety Administration. Accident statistics include pipelines transporting oil, gas, natural gas, liquid natural gas, and other hazardous materials. Just one company, Enbridge Energy, has been responsible for 1,100 pipeline spills between 1999 and 2013, according to the company’s own records.

Pipelines through waterways present their own set of challenges. Rivers especially have a penchant for scouring, which can uncover pipelines buried beneath the riverbed and expose them to forces that cause spills and leaks. Oil pipeline spills in waterways can be hard to clean up due to water currents, ice cover, and debris. Oil spills are devastating to fish and wildlife and their habitat. Oil can contaminate the food chain from top to bottom—harming and even killing organisms from algae and plankton to fish, birds, and reptiles. Oil contamination often damages fish and wildlife habitat for decades following a spill.

The vast network of domestic oil pipelines cross inland bodies of water with a width of at least 100 feet (and thus likely navigable) at 5,110 locations in the United States, according to PHMSA. The pipeline safety administration has identified 20 accidents occurring at inland water crossings between 1991 and October 2012, not including the rupture of an oil pipeline under the Yellowstone River in 2015. That 2015 incident, together with a 2011 spill elsewhere in the Yellowstone River, spilled more than 100,000 gallons of oil into a river that supports endangered and threatened species, as well as fishing and rafting.

Significant spills have occurred in rivers and waters across the country, according to the Pipeline and Hazardous Materials Safety Administration, including in California, Iowa, Kansas, Kentucky, Louisiana, Montana, Nebraska, Oklahoma, South Dakota, and Texas.

“The oil pipeline industry’s track record of spills, accidents, and disasters underscore the need for iron-clad protections,” said Shriberg. “The federal government needs to do its job and protect our communities, drinking water, jobs, fish, and wildlife from the next oil spill disaster.”