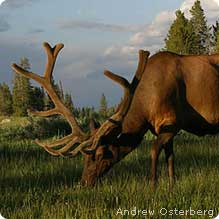 Hundreds of coal mining and oil and natural gas projects in the Powder River Basin area of Wyoming and Montana are destroying the habitat of some of the West’s most beloved wildlife – including mule deer, pronghorn antelope, elk, and greater sage-grouse – and threaten the continued viability of these species in the region and its hunting culture, according to a new report released by the Natural Resources Defense Council (NRDC) and National Wildlife Federation (NWF).

“Unchecked energy development has turned some of the American West’s best wildlife habitat into an industrial zone. Wildlife can’t thrive on habitat that is dominated by massive energy development projects, some of which can cover more than 133 football fields. More must be done to stop the proliferation of dirty fuel projects that threaten wildlife’s ability to survive,” said Andrew Wetzler, Director of the Land and Wildlife Program at NRDC.

“Scattershot energy development in the West is reducing hunting opportunities for millions of Americans and fragmenting some of America’s most important habitat for mule deer, pronghorn, elk, and greater sage-grouse.  Ask any hunter and they’ll tell you—and the data confirms—that wildlife populations are declining in the very parts of Montana and Wyoming where intense drilling has occurred and the country’s largest coal mines are located,” said National Wildlife Federation CEO and President Collin O’Mara.  “America’s wildlife deserves better.  To restore wildlife populations and expand outdoor opportunities, we need significant investment in restoring habitat wildlife, improved planning to minimize impacts on wildlife, and market-based federal royalties/fees sufficient to mitigate any damage.”

The study finds that declining population trends and reduced hunting opportunities for mule deer, pronghorn antelope, and the greater sage-grouse are associated with close proximity of the animals to energy development projects. For example:

Half of the mule deer units in the study are in poor health; those herd units are located on land with extensive energy development, including natural gas wells and large coal strip mines.
The only healthy mule deer unit is in the part of the Black Hills of Wyoming with no energy development.
Active sage-grouse leks (“strutting grounds” used for mating) are located twice as far from coal bed natural gas wells and 1.5 times as far from power lines as inactive leks.
“Hunting isn't a sport for me; it's a way of life, it's my culture,” explains Alexis Bonogofsky, a fourth-generation Montana sportswoman. “It is imperative that our public lands are managed to ensure that healthy landscapes and wildlife populations continue to thrive. Our public lands should not be sacrificial industrial zones for corporations."

Declines in habitat have direct impacts on hunting and the revenue it contributes to state economies, along with tourists hungry for wildlife-viewing experiences. Nearly 11 million tourists travel through Montana annually, largely driven by recreation and wildlife-watching opportunities. Visitors to Montana support over 38,000 jobs and generate $3.9 billion to the state economy. Wyoming’s numbers are similar: tourism in Wyoming created 31,510 jobs and totaled $3.33 billion in revenue. Hunting, fishing, and outdoor recreation are sustainable economic activities that can provide stability for rural communities.

If affected wildlife species are to rebound to healthy levels, greater land management reforms must be implemented, and state and federal governments must increase their commitment to avoid or eliminate negative impacts to wildlife, say NRDC and NWF. Specific recommendations include increasing investments in wildlife recovery and sustainability and enacting legislation that benefits wildlife and their habitats.

Losing Ground: Energy development's impacts on the wildlife, landscapes, and hunting traditions of the American West