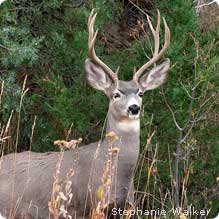 The Obama administration reportedly plans to announce a pause in coal leasing on public lands today, an important step toward assessing the true cost of coal mining to our wildlife, land, water and climate.

“Responding to calls from sportsmen, local communities, landowners, and taxpayer advocates, President Obama is taking a sensible step to modernize the federal coal leasing program, following precedent established by previous Republican and Democratic administrations.  This program has been broken for decades with leases given away at bargain basement prices to the detriment of America’s wildlife, public lands, and outdoor experiences. Today’s announcement is an important step towards recovering species, like mule deer, pronghorn, elk, and sage grouse, and addressing the more than $3 billion of taxpayer money that it will take to clean up the public lands and water contaminated by coal mining in the west.

“The National Wildlife Federation and our state affiliates will continue working with a diverse coalition of sportsmen, tribal leaders, and wildlife lovers to safeguard our public lands and protect America’s outdoor traditions for future generations.”

Hundreds of coal mining and oil and natural gas projects in the Powder River Basin area of Wyoming and Montana are destroying the habitat of some of the West’s most beloved wildlife and threatening the region’s outdoor traditions, according to a recent National Wildlife Federation report. The study found declining population trends and reduced hunting opportunities for mule deer, pronghorn antelope, and the greater sage-grouse are associated with close proximity of the animals to energy development projects.

“We're grateful President Obama and Interior Secretary Jewell are ready to take a closer look at the true costs of coal. Coal lease reform will give the taxpaying public a better deal, the climate a better deal, and will our give our salmon a better deal, too.”

“Americans deserve a fair return on the coal mined from our national public lands and it’s only fair that companies keep their pledges to restore the land they’ve disturbed. More and more of the land is going unreclaimed and sportsmen in New Mexico and across the West are seeing the loss of fish and wildlife habitat and declining mule deer and pronghorn numbers in mining areas.”

“Hunting isn't a sport for me; it's a way of life, it's my culture,” explains Alexis Bonogofsky, a fourth-generation Montana sportswoman. “It is imperative that our public lands are managed to ensure that healthy landscapes and wildlife populations continue to thrive. Our public lands should not be sacrificial industrial zones for corporations, coal included."

“For centuries, the Cheyenne have maintained respect for the land, water and animals; these values have transcended through the ages to today. Embracing these values and setting our sites on a cleaner energy future will ensure a healthier environment for future generations.”

"The current coal royalty program is out of date, it is unfair to taxpayers, and it undervalues the worth of our public lands for wildlife, hunting, fishing, and other uses.  If coal companies want to mine on public land, they should be prepared to compete in the free market and they should be ready to clean up after themselves.  It's not fair to make everyone else who uses public lands foot the bill."

“The U.S. coal industry has provided the nation with cheap power for decades, but at a steep cost to our health and the health of our public lands.  Sportsmen have always supported responsible energy development. This moratorium on future coal leases on public lands will help ensure that, going forward, coal companies – not the American public – will foot the bill on protecting our public lands and the wildlife they support.”