Press Conference and Rally at City Hall on February 18 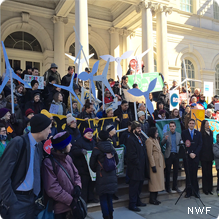 Today, more than 100 New Yorkers joined community groups, environmental justice leaders, national environmental organizations, and local officials on the steps of City Hall to thank Mayor Bill de Blasio for his commitment to power 100 percent of City operations with renewable energy and urge him to ensure that offshore wind power plays a major role in achieving that goal.

In addition to the Mayor’s goals to drastically cut carbon emissions 80 percent by 2050, New York City is the largest city in the world to set a 100% renewable energy generation goal for city operations.

“The construction and utilization of offshore wind power has the potential to transform New York’s economy and environment, replacing dirty coal with a clean and abundant form of energy. As New York strives to meet the goal of 50% generation of electricity from carbon-free renewable by 2030 outlined in Governor Cuomo’s ambitious Reforming the Energy Vision initiative, wind power will play an increasingly essential role. Achievement of these long-term goals, however, will require a long-term commitment from our state. Working with stakeholders like the Sierra Club and my colleagues in the legislature I look forward to implementing a progressive plan for wind power production that invests in New York’s future while respecting the interests of local communities and wildlife habitats.” -- State Senator Brad Hoylman, Ranking Member of the Senate Environmental Conservation Committee

"Thanks to Mayor de Blasio, New York City is leading by example by pledging to make the switch to renewable energy. Investing in off-shore wind power will help us make that transition while creating jobs for New Yorkers and reducing local air pollution. I look forward to working with the administration, the Sierra Club, NYPIRG, and the Center for Working Families to make ensure we make smart choices as we move away from fossil fuels." -- New York City Councilman Ben Kallos

"We applaud Mayor de Blasio for making New York City a leader on equitable climate action. Now the state and federal government can take the next step with a commitment to build a thriving offshore wind industry which would mean tens of thousands of good jobs in New York City and communities upstate alike." -- Bill Lipton, Director, New York Working Families

"With his bold commitment to power city operations with 100% renewable energy, Mayor de Blasio is continuing to set a high bar for climate leadership, and we're calling on him to make offshore wind a significant part of reaching that 100% goal. Not only is offshore wind power poised to make a serious dent in our climate pollution, but a significant commitment to developing offshore wind promises improved urban air quality, long-term job creation across a wide variety of sectors, lower, more predictable energy costs, and the opportunity to invest our energy dollars locally." -- Lisa Dix, Sierra Club, Senior Representative of the New York Beyond Coal campaign

“As an organization that formed in the wake of Superstorm Sandy, we deeply understand what is at stake if we, as a city, state, nation and world do not get serious about transitioning to renewable energy now. We are excited at the great potential for local jobs and sustainable energy that offshore wind would bring to NYC. We call on Mayor DeBlasio to stand with those communities most impacted by climate disaster and support offshore wind development. We can lead the way to a healthy, safe and just future. We can be the example that coastal cities across the nation look to. The future is looking bright...and windy!” -- Kalin Callaghan, Rockaway Wildfire

"New York City is now positioned as a national climate leader with goals for New York City to cut emissions by 80%, divest from coal, expand green buildings, double solar power, and power 100% of city operations with renewable energy. One of the key next steps is for the state and federal government to open the door for offshore wind development. Building a thriving offshore wind industry will create thousands or tens of thousands of good jobs, slow climate change, and help prevent future storms like Hurricanes Sandy and Irene. The U.S. Energy Department has estimated that it would create nearly 40,000 jobs and 100 businesses around New York are ready to start building components for turbines." -- Stephan Edel, Policy Director, Center for Working Families

"Offshore wind energy has the power to transform our city. This technology could create good local jobs, make us more resilient in the face of climate change, and hasten our transition away from the dirty fuels of the past. The sooner Mayor de Blasio commits to offshore wind, the sooner we can make that transformation a reality, and lead New York State into the renewable economy." -- Patrick Robbins, Co-Director, Sane Energy Project

"NYPIRG applauds Mayor de Blasio’s leadership in committing to power its buildings through 100% renewable energy by 2030—an ambitious and doable goal. But the Mayor must take tangible steps to make the promise come to life. New York City can be a global leader in renewable energy by committing to offshore wind now." -- Brennan Ortiz, NYPIRG member and Hunter College student

“New York State banned hydraulic fracturing of dirty natural gas, stopped the creation of the Port Ambrose LNG port, and defeated the coal industry. It is now time to devote resources to building the renewable energy infrastructure, which depends on massive offshore wind, to propel us to meeting our reduced greenhouse gas emissions goals. Let's Win Wind now and provide clean air and green jobs to thousands of New Yorkers as we protect our state from the pending devastation of climate chaos.” -- Marilyn Vasta, 350NYC

“Staving off the worst impacts of our changing climate means we must transition from an electricity grid reliant on fossil fuels to systems powered by clean resources such as solar and wind. New York City has an opportunity, with its commitment to 100 percent renewable energy, to offer cities around the world a roadmap to a clean energy future. One of the keys to maintaining reliability and affordability will be a diverse and consistent clean energy supply. Offshore wind has proven it is up to the challenge and should be an integral component to the City’s plan.” -- Conor Bambrick, Air and Energy director, Environmental Advocates of New York

“As a community-based peace and justice group with hundreds of members throughout Brooklyn, Brooklyn For Peace sees the issue of renewable energy as central to a long-term strategy for achieving peace for ourselves as well as for future generations. Development of renewable energy sources such as off-shore wind will give our nation the possibility of energy independence and remove one of the major sources of conflict leading to war. We urge Mayor DeBlasio to lead the way!” -- Charlotte Phillips, M.D, Chairperson, Brooklyn For Peace

“There is no way for the US to avoid catastrophic climate change without a massive offshore wind effort. We look forward to the leadership of Mayor de Blasio to jumpstart offshore wind by having our city make a long term commitment to purchase electricity from wind." -- Mark Dunlea, Green Education and Legal Fund

“Unlike offshore drilling, offshore wind provides power directly to coastal communities where we need energy the most, without the risk of oil spills or carbon pollution, while protecting our precious ocean ecosystems and marine-life.” -- Claire Douglass, Climate & Energy Team Campaign Director, Oceana

“NYC is in the position to be a leader on climate change, but in order to reach the 100% renewable goal, we need to begin investing in offshore wind now. We have the potential generate 5,000 to 8,000 MW of wind power off the coast of Long Island alone, but we need a firm commitment from our elected leaders to ensure offshore wind projects move forward.” -- Adrienne Esposito, Executive Director, Citizen’s Campaign for the Environment

“Moving to clean energy, like the abundant wind power off our coasts, can help us tackle rampant racial and economic inequality. The federal Clean Power Plan, combined with ambitious state and local initiatives to move forward with renewable energy offers states a chance to expand economic opportunities, especially for communities of color and low-income communities.” -- Edgar Gomez, organizer with Community Voices Heard, an affiliate of National People's Action.