Bipartisan Bill To Enhance Funding For Fish and Wildlife

Young, Dingell bill is "a once in a generation opportunity to save thousands of at-risk wildlife species.” 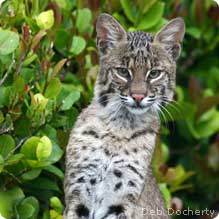 Congressman Don Young (R-AK) and Congresswoman Debbie Dingell (D-MI) have introduced the bipartisan Recovering America’s Wildlife Act (H.R. 5650) calling for $1.3 billion in existing revenue from the development of energy and mineral resources on federal lands and waters be dedicated to the Wildlife Conservation and Restoration Program to conserve a full array of fish and wildlife.

“We have a once in a generation opportunity to save thousands of at-risk wildlife species by investing in proactive, collaborative conservation. By modernizing how we fund conservation of the full diversity of wildlife, we will bolster our natural resources, strengthen our outdoor recreation economy, reduce regulatory uncertainty, improve public health, and bolster community resilience,” said Collin O’Mara, president and chief executive officer of the National Wildlife Federation. "We thank Congressman Young and Congresswoman Dingell for their exceptional leadership on the Recovering America's Wildlife Act."

The Blue Ribbon Panel on Sustaining America’s Diverse Fish and Wildlife Resources, comprised of national business and conservation leaders, convened in 2015 to recommend a new mechanism to sustainably fund fish and wildlife conservation. In March 2016, the Panel recommended that a $1.3 billion trust fund be created using existing fees from energy and mineral development on federal lands and water to support implementation of State Wildlife Action Plans in every state, territory and the District of Columbia.

“As a strong supporter of conservation and sportsmen alike, I’m proud to take the lead on an important discussion regarding fish and wildlife conservation across the country,” said Congressman Don Young. “While we’ve seen many great successes in management and conservation projects in the past, this legislation takes a unique approach to allow states to make responsible management decisions at home. As someone who proudly supports the management of fish and game for all Americans – for sportsmen, subsistence purposes, and for future generations – I believe this legislation is a responsible first step in developing a path forward.”
"It has been proven over the decades that incredible gains in species conservation have been made with dedicated sources of funding," Rep. Dingell said. "The Restoring America's Wildlife Act builds off the successes of previous efforts including Pittman-Robertson, Dingell-Johnson, and the Land and Water Conservation Fund by giving state fish and wildlife agencies additional resources they need to proactively manage at-risk wildlife species. I am proud to introduce this legislation with my Republican colleague from Alaska, Mr. Young. We both love the outdoors and know we must work hard to protect our natural resources. To some we may seem the odd couple but together we believe we can get something done that will help bring conservation into the 21st Century and complement the other successful programs that are currently in place."

“America’s hunters, anglers, recreational shooters, and boaters have been the primary funders of state-based conservation efforts to this day,” said Congressional Sportsmen's Foundation President Jeff Crane. “This recommendation simply uses funding for conservation from other sectors that use our natural resources.”

“Hunters, anglers, recreational shooters and motorized boaters, through fees and licenses, have been the backbone of funding the conservation of America’s fish and wildlife. Over the years these original conservationists have greatly enhanced the State’s ability to perform science-based management of fish and wildlife species throughout the country,” said Dave Chanda, President of the Association of Fish and Wildlife Agencies and Director of New Jersey Division of Fish and Wildlife. “Today we find ourselves at a critical crossroad and impending fish and wildlife crisis that could alter our children and grandchildren’s opportunities to enjoy these resources. If we want to secure the future of all of America’s fish and wildlife resources, a fundamental enhancement in how we finance conservation is essential. We believe the right path is to begin investing now in a 21st century vision for fish and wildlife.”