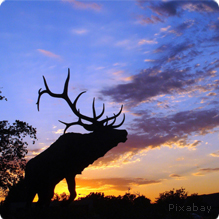 WASHINGTON – More than forty sportsmen’s and outdoor organizations from across the country today released a letter that asks all the presidential candidates to publicly state their support for our national public lands – the places we hunt, fish and recreate and that sustain our fish and wildlife populations.

The National Wildlife Federation and its state affiliates are also contacting other candidates, seeking their public endorsement of a statement of principles that opposes turning over public lands to individual states, selling them to private interests or undermining federal management of the lands that belong to all Americans.

While the majority of Americans cherish our national public lands, the sporting and outdoor organizations note that a small but strident group of state and federal lawmakers and their allies is trying to dismantle the network of public lands that is a cornerstone of our economy and national identity.

“Our national tapestry of public lands is the product of more than a century of leadership by both Republicans and Democrats,” the organizations wrote to the presidential hopefuls. “America’s hunters and anglers have a special interest in our public lands. Some of our most treasured big game animals depend on the secure habitat and migration corridors that are provided by public land. Many sportfish species depend on cool, clean waters that originate on public lands.”

The presidential campaigns have “an opportunity to explain to the American people how you will maintain our public lands for future generations,” the groups wrote.

“Our national public lands embody the best of our democratic ideals, providing common ground for people from all walks of life to hunt, fish, hike, paddle, camp and watch wildlife,” says Collin O’Mara, the president and CEO of the National Wildlife Federation. “Conservation of our fish and wildlife, waterways and great landscapes is not a partisan issue: it’s an American issue. We’re calling on all candidates from all parties to assure the American public that they will protect and maintain our public-lands legacy and outdoor traditions of hunting and fishing.”

“There are few things more American than our proud public-lands traditions, so it is critical to sportsmen and women across the country that our next president stamp out any movement to give away or sell off the national forests, recreation areas, BLM lands, and other public areas that give us quality places to hunt and fish,” says Whit Fosburgh, president and CEO of the Theodore Roosevelt Conservation Partnership. “Hunters and anglers have been willing to step up and fight public land takeovers at home in the Western states, and we won’t stand idly by as this idea somehow continues to be considered in Congress, but we need more champions in Washington.”
“The American concept of public lands for the enjoyment of all people coupled with public ownership of our wildlife resources are unique and worth preserving. Public lands are essential to our outdoor heritage, be it for hunting, fishing, wildlife watching, or hiking”, says George Thornton, CEO of the National Wild Turkey Federation. “Our members, and all sportsmen and sportswomen, are committed to keeping public lands public. We are calling on all elected officials, not just the presidential candidates, to commit to protecting our outdoor heritage.”

Here are comments from other sportsmen and women and wildlife advocates:

“In North Carolina, sportsmen and women and outdoor enthusiasts of all kinds value our public lands and wildlife. We can’t imagine not being able to enjoy these lands, from the woods to the coast, and not being able to hunt, fish, hike and paddle there. As an American, I know I have access to open and wild lands here and across the country, from the Great Smoky Mountains to the Rocky Mountains. We all own these lands and we expect our elected leaders to protect our American birthright.” - Carol Buie-Jackson, board of directors, North Carolina Wildlife Federation

“The Federal public lands in the West and in our state of Wisconsin are immensely important to the sportsmen and women and other recreational users that we represent. Without these national public lands, many of us would not be able to hunt, fish, hike, camp and enjoy the outdoors with our friends and family and our great natural outdoor heritage will be lost.” - George Meyer, executive director, Wisconsin Wildlife Federation

“Presuming Coloradans of the year 2040 – projected to be 2.3 million more than today – and tourists will come here in part for our fantastic outdoor recreation opportunities, we absolutely need to hang onto our public lands to ensure there will be places for people and wildlife to roam.” - Suzanne O’Neill, executive director, Colorado Wildlife Federation

“The thought of giving away or peddling our public lands to the highest bidders goes against everything I’ve ever associated with being an American. The freedom to hunt and fish in some of the most beautiful country anywhere and to realize the land belongs to me, my neighbor and people thousands of miles away is an awesome feeling. It’s troubling that some of our elected representatives and office-seekers might not realize how precious America’s public lands are.” - Garrett VeneKlasen, executive director, New Mexico Wildlife Federation

Please note: the National Wildlife Federation and the co-signers of these letters do not participate in political campaigns, nor do we endorse, support or oppose any political party or any candidates for elected office.