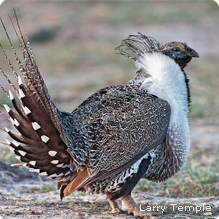 Eleven groups representing tens of thousands of hunters and other conservationists from across the West have sent a letter to congressional leaders asking them to reject efforts to insert a rider into the Fiscal Year 2017 National Defense Authorization Act (S. 2943/H.R. 4909) that would block efforts to conserve the Greater sage-grouse.
The bill, awaiting final approval, sets annual funding levels for the Defense Department, including spending on the personnel, technology, operations, and intelligence needed to protect America’s interests and support our servicemen and women.

Unfortunately, the U.S. House of Representatives voted in May to attach a “rider” to the National Defense Authorization Act that blocks the implementation of federal sage-grouse conservation plans.  The plans, adopted in September 2015 after years of on-the-ground work, collaboration and local input, are part of the range-wide effort to keep the sage-grouse under state management and off the federal Endangered Species list.  The Senate version doesn’t include the provision, which would set back all the collaborative work and conservation plans undertaken to avoid having to list this iconic species in the West.

The Department of Defense has clearly stated that the sage-grouse conservation plans do not interfere with military readiness and that the House rider is unnecessary.  In a letter to Congress last April, Acting Assistant Secretary of Defense for Readiness Daniel Feehan stated that “[We] do not believe these plans will affect military training, operations, or readiness to any significant degree.”

In fact, the Department of Defense has already spent millions of dollars protecting sage-grouse habitat in Nevada as a strategy for enhancing military readiness. “The Department of Defense has invested millions of dollars into land protection to limit development around bases and military zones,” says Richard Oblak, a board member for the Wyoming Wildlife Federation. “I spent 24 years as a Master Sergeant in the Air Force, and I can assure the proponents of this rider that going forward with plans to conserve the sage-grouse will not interfere with operations on those military landscapes.”

In addition to blocking the Department of Interior from making a scientific determination about the status of the sage-grouse, the rider adopted by the House of Representatives is written to give state officials a veto over federal management of national public lands.   This would endanger the survival of the sage-grouse and threaten the continued availability of public lands for grazing, energy development, and hunting and other recreational activities.

“The BLM plans, while not perfect, reflect the complexity of managing millions of acres for people, wildlife, and local economies,” said Dave Chadwick, executive director of the Montana Wildlife Federation. "Politicians need to quit trying to 're-litigate' the plans and focus on getting them implemented. Working together - instead of scoring political points - is how we make multiple-use management succeed."

“It is baffling that Congress would hold our national defense hostage in order to derail the years of work that we’ve put in across the West to prevent the sage-grouse from becoming endangered and keep the species under state management,” said Chamois Andersen, executive director of the Wyoming Wildlife Federation.

“The collaborative process that brought ranchers, energy companies, federal, state and local officials and conservationists in the West together to try to save the greater sage-grouse and its habitat should be given a chance to work, not discarded by Washington lawmakers without so much as a test drive,” said Kate Zimmerman, the National Wildlife Federation’s public lands policy director.

Here are the organizations that signed the letter: