79,000 Acres Off The NY Coast To Be Auctioned For Offshore Wind Power Development 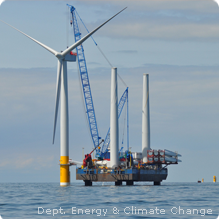 Albany, N.Y.— The U.S. Bureau of Ocean Energy Management, the agency charged with leasing federal waters for offshore wind development, advanced offshore wind progress today by announcing a lease auction for of over 79,000 acres off the Rockaways in Queens. This area is large enough to support a large scale commercial wind project. New York State Energy Development and Research Authority (NYSERDA) has announced its intention to bid into this auction in order to control the timing and cost of offshore wind development at the site.

With Governor Cuomo’s Clean Energy Standard requiring New York to source 50 percent of its electricity from renewables by 2030, a major commitment to offshore wind power from both the state and federal government is essential. The Administration has publicly stated that the development of offshore wind is essential to meeting that target and today’s announcement marks an important step forward in pursuit of critically needed offshore wind energy for New York.

Additionally, national, state and local organizations have called on the Governor to commit to a long term, large scale offshore wind program for New York that will provide the certainty and longevity needed to get offshore wind to scale and for the Long Island Power Authority to finally move forward New York’s first offshore wind project this year.

“As the anniversary of Superstorm Sandy reminds us, we must move quickly to reduce pollution and advance solutions to climate change. Responsibly developed offshore wind power offers New York an unmatched opportunity to meet the state’s clean energy goals with a massive local energy source. Now is the time for Governor Cuomo to embrace offshore wind power with the bold commitment needed to launch a new clean energy industry for New York.”

“Today’s announcement is another critical step towards ensuring New York’s clean energy future. We’re looking forward to working with BOEM and the State to secure offshore wind off of the Rockaways. Offshore wind has the ability to provide Long Island and New York City with safe, reliable and clean energy to illuminate millions of homes and help the Governor meet his 50 percent renewable energy by 2030 target."

“This key action by BOEM reflects a major commitment by our federal government to the large-scale development of offshore wind power for New York” said Liz Gordon, Director of the New York Offshore Wind Alliance. “The upcoming lease auction will launch a new offshore wind power era – one where hundreds of thousands of New Yorkers can get clean power from a local resource and Governor Cuomo’s goal of 50 percent renewables by 2030 can be realized.”

“The winds off Long Island’s Atlantic coast could power millions of homes and businesses with clean, local and renewable electricity. Opening this Wind Energy Area for bidding is an important step in tapping into this vast clean energy resource right here at our doorstep.”

"I think it's a step in the right direction, we have been hoping that there would be wind farms built off of the coast of the island and I am happy to know that the process is moving forward.  I hope that when my children are old enough they will be able to reap the benefits of these decisions that we are making towards a clean energy future."

"As Nobel Laureate Bob Dylan said 'the answer is blowing in the wind.'   Long Island and New York City are surrounded by an abundant renewable energy source.  The auction of wind-farm space moves us well beyond concept and one step closer to an historic advancement in clean energy."

“Offshore wind will be key to putting the Empire State on a path toward a renewable energy future. The announcement by the Bureau of Ocean Energy Management to move forward the lease process in New York is a great step towards New York achieving a large-scale, long-term commitment to an offshore wind program. We look forward to working with state and national leaders and stakeholders in the efforts to capture the immense pollution-free resource and move the Empire State to 100 percent renewable energy.”

“Governor Cuomo must lead New York in a transition from dirty energy to clean renewable power, and offshore wind will help achieve this essential goal. Climate change could be catastrophic to New York City and Long Island, but fortunately Governor Cuomo has the opportunity to put in place the safe energy alternatives that will reduce the threat.”

“With the historic global Paris Agreement about to go into effect, we need to act locally in New York and every other state to scale up the clean power needed to curb climate change. The federal government’s first ever offshore wind lease sale for New York puts the state on track to secure the zero-carbon and renewable benefits of offshore wind power, beginning in the waters off the Rockaways and Long Island.”

“Let the bidding begin so that New Yorkers can soon enjoy 100 percent clean, renewable energy! There is no way New York will meet climate and clean energy goals without tapping the huge offshore wind resource being made available through this auction. So, the sooner we get there the better.”

“We are thrilled to see this official step taken to begin the process of shifting New York State to renewable generation. We will work hard as an advocacy group to make sure this wise step benefits the entirety of New York rate-payers, workforce, marine life and those who have seen disproportionate health impacts from fossil fuel generation.”

“The winds of change are blowing across our nation, and Long Island will help lead the way.  The ability to build large scale wind farms is a game changer in the critical effort to achieve energy independence, clean energy and fight climate change.  This move signifies hope for breaking our addiction to fossil fuels and moving our nation into a cleaner future.”