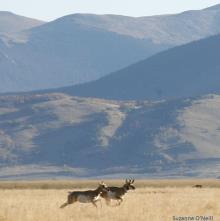 DENVER – The public will get a look Tuesday at the preliminary outline of a plan intended to balance any oil and gas development in South Park with the water, fish and wildlife resources that make the area so important to hunters, anglers, recreationists and water users along Colorado’s Front Range.
The Bureau of Land Management Royal Gorge Field Office will host a public meeting from 1 p.m. to 4:30 p.m. at the Fairplay Community Center to give an update on the South Park master leasing plan. The meeting is informational; public comments won’t be taken.

The Park County commissioners and other elected officials, area residents and sportsmen and conservation groups have urged the BLM to write a master leasing plan, or MLP, for South Park as part of its update of the regional resource management plan for public lands. An MLP, one of the 2010 federal oil and gas leasing reforms, takes a landscape  look at an area, determines potential conflicts where minerals and other resources – water, wildlife, fish – overlap and maps out where and how development should and should not occur.

South Park, the headwaters of the South Platte River and a major source of drinking water for the Denver area, is one of the first places where an MLP is being developed from the ground-up. It is considered a pilot for reforms in the Interior Department’s Planning 2.0 initiative, which include earlier and more frequent public involvement.

“We’re encouraged to see progress on the South Park master leasing plan because of the area’s incredible fish, wildlife and water resources and local economy. We appreciate this public meeting and urge the BLM to do all it can to get this process over the finish line to conserve South Park’s important wildlife habitat, Gold Medal trout streams and water resources for generations to come,” said Suzanne O’Neill, executive director of the Colorado Wildlife Federation.

South Park, nationally renowned for its fishing, is home to several state parks and state wildlife areas. The region includes habitat for elk, deer, pronghorn, bighorn sheep, mountain plovers and many other species. It’s a source of more than $17 million in annual economic benefits from wildlife-related recreation.

“We have a unique opportunity to take a landscape-level look at public lands managed by BLM, identify important fish and wildlife habitat and potential threats to water well before future oil and gas leasing,” said Aaron Kindle, the National Wildlife Federation’s Western sportsmen’s campaign manager.  “A look-before-you-lease approach is what a master leasing plan is all about, and South Park is an ideal place for it because of the rich natural resources and the overwhelming support for safeguarding those resources."

The BLM plans to release the draft master leasing plan in early 2017 for public comments.