Groups call on U.S. EPA to Stand Up for a Clean Lake Erie 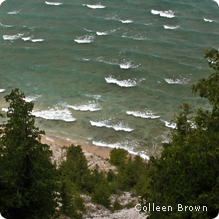 Columbus, OH – Today a coalition of fishing boat captains, Lake Erie businesses, environmental and conservation advocates, and sportsmen groups are threatening to sue the U.S. Environmental Protection Agency because of the agency’s failure to abide by its obligations under the Clean Water Act. The legal action is part of an effort by groups to protect Lake Erie from harmful algal blooms, like the 2014 bloom which poisoned drinking water for more than 400,000 people.

“We’re prepared to do what it takes to protect Lake Erie from toxic algae,” said Heather Taylor-Miesle Executive Director at the Ohio Environmental Council. “We need those in power to do all they can to actually solve this problem. Lake Erie, and everyone who depends on it for drinking water, jobs, and a place to fish and swim, need the U.S. EPA to step in and do its job.”

“Foot-dragging by the U.S. EPA has to stop,” said Mike Shriberg, Great Lakes regional executive director of the National Wildlife Federation. “People, communities, and businesses are counting on federal and state public officials to act with urgency to put an end to harmful algal blooms that threaten our drinking water, jobs, wildlife, and way of life.”

In October the Ohio EPA failed to designate all of the Ohio portion of the western basin of Lake Erie “impaired.” The Clean Water Act requires Ohio to determine if the state's rivers, streams and lakes are clean enough to provide safe drinking water, fishing, and swimming. If they do not, they are required to be listed as "impaired," followed with a plan that sets pollution limits and detailed actions to meet them. Lake Erie clearly meets the definition of impairment.

“The Clean Water Act provides powerful tools to protect our drinking water, public health, and economy. It’s time to use them to clean up Lake Erie,” said Alliance for the Great Lakes President and CEO Joel Brammeier. “We can solve this problem, but it’s going to take action. State and federal leaders have said the right things, and now they have to follow through.”

Instead of looking at the entire western basin within Ohio’s borders, Ohio EPA only evaluated and gave the impairment designation to Lake Erie’s shorelines and included the drinking water intake area for Toledo and Oregon. The agency said it does not plan to analyze the rest of Ohio’s portion of the lake, instead saying the US EPA in Chicago should. That is why groups are calling on Gina McCarthy, Administrator of the U.S. Environmental Protection Agency, to reject Ohio’s list, accept Michigan’s list, and designate all of western Lake Erie impaired.

“The impaired designation is needed to ensure that Lake Erie gets good science, an implementation plan and as much funding as possible to reduce the algae that threatens the drinking water of millions and protect a resource that generates tens of billions of annual economic impact,”  states Sandy Bihn, Executive Director of the Lake Erie Foundation.

“This summer, we were given some relief because of favorable weather, but we can’t rely on the weather to rid Lake Erie of toxic algae,” explained Captain Paul Pacholski, President of the Lake Erie Charter Boat Association. “We need the EPA to step up and do its job so charter boat captains who rely on a healthy lake can do ours.”

In November of 2016, the Michigan Department of Environmental Quality (DEQ) listed its portion of the open waters of western Lake Erie as impaired under the federal Clean Water Act. Reacting to deteriorating water quality and the ongoing threat of harmful algal blooms in Lake Erie, the DEQ included the waters of the Great Lake that fall within Michigan’s borders in its report to the United States Environmental Protection Agency (EPA). Michigan’s decision relies upon clear science and many organizations have been encouraging regulators in Ohio and at the EPA to follow suit.

“Michigan League of Conservation Voters urges the EPA to acknowledge the growing threat of nutrient pollution to the health of Lake Erie by declaring all the waters of the lake’s western basin as impaired under the Clean Water Act," said Lisa Wozniak, Executive Director. "The EPA needs to step up and address one of the region’s top public health concerns; toxic algae blooms that threaten our access to safe drinking water. Now is the time for us all to work together and launch new, innovative efforts to clean up one of our beautiful, yet deeply damaged, Great Lakes.”

"The waters of Great Lakes are the most critical asset we have," said Dan Eichinger, executive director of Michigan United Conservation Clubs, "we are committed to finding a solution to Lake Erie algae, and we can't find a solution until we acknowledge the problem."

Under the Clean Water Act, a 60-day notice and waiting period is required before filing a Citizen Enforcement Lawsuit. During that period U.S. EPA will have the opportunity to reject or approve Ohio EPA’s and Michigan Department of Environmental Quality’s list of impaired waters. If the U.S. EPA fails to make a decision, the groups intend to file a citizen suit in Federal District Court against the Administrator of the U.S. EPA. That lawsuit would seek a judgment requiring the U.S. EPA to fulfill its mandatory duty. The organizations filing today’s notice include the Ohio Environmental Council, Alliance for the Great Lakes, National Wildlife Federation, Michigan League of Conservation Voters, Lake Erie Foundation, Lake Erie Charter Boat Association and the Michigan United Conservation Clubs.

Under the Clean Water Act, every two years states submit to the EPA lists of waters that are unhealthy. The lists help the EPA work with states to target resources and expertise to restore sick waters to health. Groups are announcing their intent to sue the EPA because of the agency’s failure to act on Ohio’s and Michigan’s lists, delaying action to help Lake Erie.