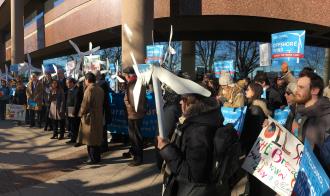 Uniondale, N.Y.— One week after the Block Island Wind Farm began producing power, New York labor unions, civic and environmental organizations and elected officials hosted a rally outside of Long Island Power Authority (LIPA) today praising them for their support of offshore wind power and next month’s expected vote to move forward on the nation’s largest offshore wind project. Over 100 gathered in front of LIPA, representing Long Island’s largest showing of support for offshore wind to date. Located off the east end of Long Island, Deepwater Wind’s 90-megawatt, 15-turbine project will produce enough energy to power about 50,000 Long Island homes by 2022.  Additionally, groups are calling on LIPA to move forward on the Island-Wide renewable energy Request for Proposal in early 2017 which could include another 210 MW of offshore wind off of Long Island’s south fork.

Now it is more urgent than ever for Governor Cuomo to commit to a large-scale, long-term offshore wind program in the State of the State, which is critical to ensure that he meets his goal of powering 50 percent of New York’s energy from renewables by 2030 and provide thousands of new jobs and economic development opportunities throughout the state.

In response, a coalition of organizations provided the following comments:

"A comprehensive offshore wind program is essential to building a strong, clean-energy economy in our great state, and to meeting carbon reduction goals,” New York Senator Todd Kaminsky said. “New York must remain a responsible, conscientious player in tackling climate change. I will continue to push for clean-energy policies that provide safe, reliable, and renewable power."

"The time for delay is over,” New York Senator Phil Boyle said. “I strongly urge the LIPA Board to today once again make New York a leader in America's energy future by voting to approve offshore wind in the Empire State.”

“Our region is blessed with a remarkable offshore wind resource that can help transform our energy economy.  Committing to power Long Island with offshore wind will put us on a path to meet New York State’s renewable and energy efficiency goals, including reaching the 50 percent carbon emission reduction by 2030 and the 80 percent reduction by 2050,” New York Assemblyman Steve Englebright said. “Investing in offshore wind power generation will also power our regional economy and position Long Island to serve as a major regional hub for the U.S. offshore wind industry in the long term.”

"Offshore wind power, energy storage and conservation are the right choices for the Town of East Hampton and the State of New York and we hope that LIPA Trustees will select these proposals for the South Fork," East Hampton Supervisor Larry Cantwell said.

“National Wildlife Federation is proud to stand with this broad, diverse, and growing coalition of public support for New York offshore wind power,” Catherine Bowes, Senior Manager at National Wildlife Federation said. “Responsibly developed offshore wind power is New York’s golden opportunity to reduce pollution, create thousands of jobs, and meet the state’s renewable energy goals. With leadership from the Long Island Power Authority, New York can finally tap into the booming offshore wind industry that currently supports over 75,000 jobs. Now is the time for Governor Cuomo to build on this momentum with the long-term, large-scale offshore wind commitment needed to unleash the many economic and environmental benefits of the massive energy opportunity far off our shores.”


“The Long Island Federation of Labor applauds Governor Cuomo’s vision for renewable energy,” John R. Durso, President, Long Island Federation of Labor, AFL-CIO said. “It will address our concerns about climate change and make New York a leader in creating union jobs in an emerging offshore wind industry. We look forward to LIPA’s approval of projects proposed by Deepwater Wind which will enable Long Island to become a leader in renewable energy.”

“It’s time Long Island gets back on the map as being a home to innovation and forward progress,” Tim McCarthy, Business Representative, IBEW 25 said. “Long Island needs a strong, long term industry that provides good paying jobs. Wind checks those boxes and many more.  From turbine construction and maintenance jobs to supply chain jobs, employment opportunities will be in the thousands. It’s the right industry at the right time.”

“We applaud LIPA for continuing to move the process forward for New York’s first offshore wind project. This project is a critical first step in putting New York on the map as a regional hub for offshore wind, creating hundreds of jobs and building an offshore wind program at scale, ,” Lisa Dix, Senior New York  Representative for the Sierra Club said. “Governor Cuomo can further build on his legacy as a national climate and clean energy leader by committing to a long term, large scale offshore wind program for New York in this year’s State of the State address.”

“It’s been a marathon of work and effort to bring wind power to Long Island, but we are at the last mile and moving closer to the finish line,” Adrienne Esposito, Executive Director of Citizens Campaign for the Environment said. “Long Islanders are ready for offshore wind. We have assessed the science, the economics and the societal benefits and we concluded that wind works as an important mainstream energy source. We can longer be fossil fools and deny the consequences of climate change. Today’s rally shows one thing is abundantly clear: Long Island policy makers, environmental and civic groups, labor and business leaders and the public are standing together to support offshore wind for Long Island. CCE looks forward to celebrating LIPA’s approval of the South Fork offshore wind farm contract early next year.”

"It's LIPA's turn to move forward and refocus our energy,” George Povall, director of All Our Energy said.  "Choosing environment-saving offshore wind now can assure New York's leadership will reap the job, cost, and clean energy benefits just waiting to be claimed for this and the next generation."

"Governor Cuomo’s bold leadership, NYSERDA’s vital planning work, and LIPA’s strong endorsement of the 90MW project for the South Fork, have all combined to create great support for offshore wind in New York," said Liz Gordon, Director of the New York Offshore Wind Alliance. “Now we can build on that momentum by committing to a large-scale, long-term offshore wind program for New York that will stimulate billions in investment, create thousands of skilled jobs, build coastal infrastructure and deliver clean, cost-effective electricity to hundreds of thousands of homes in New York City and Long Island.”

“Offshore wind is a tremendous clean, pollution-free resource located right off our shores. The Empire State is poised to be a leader in the development of offshore wind, which is necessary to achieve Governor Cuomo’s commitment to power New York State with 50 percent renewable energy by 2030,” Heather Leibowitz, Environment New York Director said. “Today’s rally showed that New Yorkers are ready for offshore wind. We commend LIPA for continuing the work to bring forth New York’s first offshore wind project. We look forward to continuing our work with local and state officials on a long-term, large-scale commitment to offshore wind in New York.”

“With Donald Trump about to occupy the White House, it’s essential that states like New York take the lead in transitioning from dirty fossil fuels to renewable energy,” Eric Weltman, Senior Organizer, Food & Water Watch said. “Climate change could be catastrophic to New York, but with the fossil fuel industry poised to set federal energy policy, we need Governor Cuomo to lead a clean energy revolution. Having banned fracking, a next crucial step is for New York to move forward with the nation’s largest offshore wind farm.”

"We urge Long Island Power Authority trustees to approve its plan to purchase power from the South Fork offshore wind area without any further delay,” Ling Tsou, Co-founder, United for Action said. “This approval will not only help combat climate change but also help spearhead the momentum to build New York State into a leader in developing a renewable energy economy."

"The Long Island Power Authority and New York State have the opportunity to take a landmark step towards a renewable energy future by supporting offshore wind,” Kevin Dugan, NYPIRG Project Coordinator at Nassau Community College said. “Indeed, offshore wind is a critical piece of New York's energy pie if we are going to meet our renewable energy goals and combat the worst effects of climate change."

“We stand with a broad-base of support for Governor Cuomo and LIPA to create national leadership to move forward with offshore wind for New York,” Kim Fraczek, Co-Director, Sane Energy Project said. “We know the renewable economy is here, and we want to secure New York leadership for labor, rate-payers and the climate."