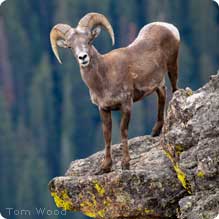 Hunters, anglers and wildlife advocates oppose congressional attempts to strip Americans of their public-lands heritage, which would endanger fish and wildlife populations nationwide and undermine the ability to hunt, fish and recreate as we have for generations.

The National Wildlife Federation and its Western state affiliates said two bills up for debate Thursday before the House Natural Resources Subcommittee on Federal Lands would remove millions of acres of national forest lands now managed for multiple uses from the public domain. Both HR3650 and HR2316 would make timber production the priority in large tracts of forests, which are important sources of clean water and fish and wildlife habitat. Fundamental environmental laws protecting air and water quality and wildlife and existing requirements for public input into decisions about public lands would no longer apply.

“Sportsmen and women and outdoor enthusiasts of all backgrounds have repeatedly made it clear that our national public lands are fundamental to our economy, way of life and identity as Americans. The National Wildlife Federation and its affiliates have helped defeat several land-grab attempts in statehouses across the West and we will keep fighting any land-giveaway schemes by Congress,” said Aaron Kindle, the National Wildlife Federation’s Western sportsmen’s campaign manager.

Kindle noted that NWF’s 49 state and territorial affiliates voted unanimously in 2014 to reaffirm their support for national public lands and opposition to large-scale land exchanges, sales or giveaways.

“In communities all over the West, local stakeholders are working together with the Forest Service, Bureau of Land Management, farmers and other agencies to find balanced ways to manage public lands. We need to support implementation of these practical, local solutions instead of promoting speculative ideological schemes that will really just reduce local input." ~ Dave Chadwick, executive director of the Montana Wildlife Federation

"Until recently, the public lands seizure movement was fought on the local level. The movement is now expanding and has made it to the national stage. For the first time, some elected officials at the national level are calling for public lands transfer across the country, which would deny Americans access to treasured areas that they've used to hunt, fish and camp in for decades. Our heritage is at stake if public land transfer proposals continue to move forward." ~ Garrett VeneKlasen, executive director of the New Mexico Wildlife Federation

“The wealth of public lands retained in Idaho represents one of the last great bastions of our Western character. We have wide open spaces where every stream is clear, quality habitat supports game herds that roam in abundant numbers, and we can wander over ridge line after ridge line without ever seeing a ‘Keep out’ sign. We value our shared national lands and our access to them. The Idaho Wildlife Federation opposes any legislation that would wrest public land from public hands and sell it to a singular extractive use. Our message to Congress is that Idaho doesn’t want your locked gates or ‘Keep out’ signs.” ~ Brian Brooks, Idaho Wildlife Federation sportsmen coordinator

"While some members of Congress are devising ways to favor logging in large areas of our public lands and take away Americans' access to these lands for recreation, Coloradans are pushing to create an annual celebration of the benefits of public lands to our quality of life and economy. Sportsmen and women, wildlife viewers and other outdoor enthusiasts enthusiastically support a bill in the state legislature that would create ‘Public Lands Day’ in Colorado on the third Saturday each May. Passage of the bill would underscore what we in Colorado understand, and out-of-step politicians fail to grasp: Americans love their public lands and are willing to make a stand to keep them in the public domain." ~ Suzanne O’Neill, executive director of the Colorado Wildlife Federation

“Transferring public lands to the states would put them on the fast track to development. These lands are vital to wildlife, they are where we connect with nature, go hunting and fishing and enjoy the outdoors with our children. They also contribute to our well-being, the air we breathe and the water we drink. We live for these lands and the great outdoors.” ~ Chamois Andersen, executive director of the Wyoming Wildlife Federation