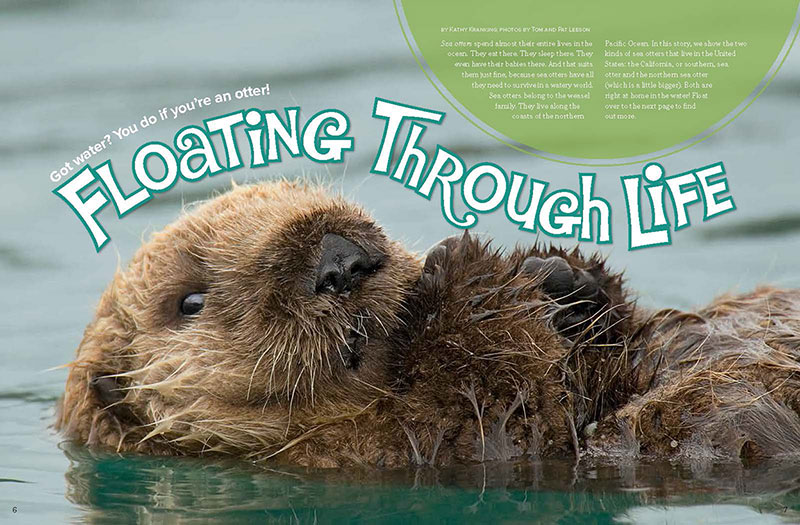 The National Wildlife Federation and its treasured publication, Ranger Rick magazine, are pleased to announce that Tom and Pat Leeson of Vancouver, Washington, are the winners of the Ranger Rick 2015 Photographer of the Year Award. Each year this award is given to the professional photographer or photography team whose work in Ranger Rick has most effectively advanced the magazine’s mission: to inspire in young children a love and understanding of wildlife and the natural world.

The Leesons’ endearing and informative photos of sea otters living along the Pacific coastline appeared in the February 2015 issue of Ranger Rick and are an outstanding contribution to the magazine’s mission. The photographs demonstrate how perfectly adapted sea otters are for life in a kelp forest.

Contest judges took special note of the husband-and-wife team’s ability to identify sea-otter behaviors “so sensitively and explicitly that the images create for children a very personal and in-depth view of the animals’ watery world.”

The Leesons started their nature photography careers more than 40 years ago. Their first Ranger Rick story was about mountain goats in Olympic National Park and appeared in the June 1978 issue. Since then, hundreds of their wildlife photos—including shots of grizzlies, wolves, black bears, beavers, badgers, pandas, elephants, and tigers have appeared in the beloved children’s magazine.

Pat says that when she and Tom produce an especially eye-popping picture of wildlife behavior, they often say, “This is the perfect shot for Ranger Rick!”

Ranger Rick’s photo editor, Susan McElhinney, says, “Behind every Leeson photo lies copious research, patience and perseverance, finely honed skill, and a keen artistic eye. Pat and Tom often spend months at one location—experiencing all types of weather conditions and insect bites—to capture stunning images of a single species and its struggles to exist. Many of the species are endangered, and this kind of window into their lives shows how these species and their ecosystems are essential to our natural world. ”

The Leesons’ photographs have been published in numerous other nature publications, including National Wildlife, National Geographic, Audubon, Sierra, GEO, and BBC Wildlife. “Through our images, we try to encourage others to be good stewards of this incredible resource—Earth,” Tom says.

Along with the distinction of being named Ranger Rick Photographer of the Year, the Leesons receive a $1,000 prize and an announcement in the May 2016 issue of Ranger Rick.