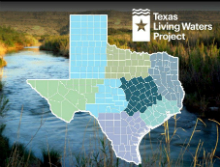 Austin, TX - The Texas Living Waters Project, a partnership of the National Wildlife Federation, Sierra Club, and Galveston Bay Foundation, today released the first-of-its-kind Texas Water Conservation Scorecard, an in-depth analysis and ranking of the water conservation efforts of more than 300 water utilities in Texas. Based on publicly available information, the Scorecard revealed a wide disparity of effort and information on what is being done to conserve the Lone Star state’s most precious resource: water.

The Scorecard is primarily an evaluation of utilities based largely on their level of effort to advance water conservation, and to a lesser extent on their achievements. Scoring criteria included a utility’s compliance with water conservation planning and reporting requirements, its record on water loss and meeting targets for water use reduction, outdoor watering limits, and rate-based incentives for efficient use of water. Large and medium-size utilities (serving 25,000 customers or more) were evaluated on ten criteria while smaller utilities (serving less than 25,000) were rated on six criteria.

“We found that there were a handful of water utilities in Texas that are really doing a great job, but most utilities need to increase their efforts,” said Jennifer Walker, Water Resources Program Manager at the Sierra Club’s Lone Star Chapter. “We hope that the Scorecard assists utilities in identifying areas to improve and enhance their water conservation programs.  This report is meant to encourage all utilities to improve their water conservation programs because Texans cannot rest on our laurels when it comes to conserving our water resources.”

Some of the Scorecard’s findings included:

The quality, detail, and public accessibility of the water conservation plans that most utilities are required to submit to the State of Texas vary widely.
Approximately 40 percent of the utilities reported a loss of more than 11 percent of the water pumped in their system. Twenty percent of that group reported a loss of more than 15 percent.
During 2009-2013, more than half of utilities serving at least 25,000 people beat their water use reduction targets, although drought restrictions were a likely key factor. However, only about 13 percent of these utilities either reached or went beyond the per capita water use target recommended by the state.
Roughly two-thirds of these utilities set a per capita reduction target below the minimum rate of progress recommended by the state.
Only about one-third of these utilities placed any limitation on outdoor landscape watering except during drought periods, even though outdoor watering accounts for substantial increases in summertime water use, which spurs development of additional costly water infrastructure.
“Most utilities have more options to conserve water than they are using,” said Ken Kramer, Water Resources Chair of the Sierra Club’s Lone Star Chapter. “There are innovative programs in Texas for financing conservation and water loss control, but most utilities have not adopted more than a handful of the best conservation practices in a State guidebook. Utilities have more tools in the water conservation toolbox than ever before - this is the time to use those tools to build a stronger framework for our state’s water future.”

The top five scores (80 and above) among large and medium-size utilities belonged to:

Seventeen large and medium-size utilities received a score of 40 or lower, which corresponds to negligible evidence of participation in water conservation efforts.

“Texas would be in much better shape if water conservation plans, summaries, and progress reports were standardized. But more important than that is the need to intensify efforts across the board,” said Tom Spencer, Texas Living Waters Program Director for the National Wildlife Federation. “The State of Texas should provide more resources for small water utilities in educating their customers on water use and conservation, and our organizations stand ready to support and raise awareness of best practices.”

“We acknowledge and appreciate the work that water utilities have done to advance water conservation in Texas,” said Walker. “Many utilities are developing creative and innovative programs to do more with the water they have, thus preserving and extending Texas’ water supply, saving customers money, and protecting Texas’ environment.”

For the Scorecard interactive webpages and PDF of the report visit: www.texaswaterconservationscorecard.org

For more on the Texas Living Waters Project visit:
www.texaslivingwaters.org