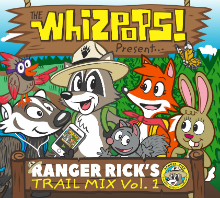 RESTON, Va. – The National Wildlife Federation (NWF), America’s largest wildlife conservation and education organization, along with the Whizpops band, are pleased to announce the debut of their new album, “Ranger Rick’s Trail Mix.” The anticipated album will be available nationally on National Endangered Species Day on May 20. The educational album highlights endangered wildlife across North America and the need in preserving animals and protecting their vital habitats.

“The National Wildlife Federation and Ranger Rick are excited to launch our new partnership with the Whizpops. We are proud to work with like-minded partners who care deeply about environmental stewardship,” said Deana Duffek, head of Brand Licensing and Consumer Products. “Music is a powerful tool, especially as it relates to children and education, and we’re enthusiastic about using this tool to educate future generations and raise our nation’s next conservationists.”

The Missoula-based children’s band features two elementary school teachers, a biologist-keyboardist and a blend of other talented musicians that each hold a passion for nature and wildlife. The band’s latest album, “Ranger Rick’s Trail Mix” includes songs about bison, black-footed ferrets, swift foxes, monarchs, polar bears and many other species found across the country. Previous albums from the Whizpops include marine wildlife and great outdoors themes. Whizpops has also received the Parents’ Choice Recommended award from the Parents’ Choice Foundation, an award given for their impressive number of facts about the natural sciences and their positive appeal to children.

“We are incredibly honored and excited to support an organization whose mission resonates with us individually, and collectively as a band. The National Wildlife Federation understands the importance of reaching out to inspire the next generation of conservationists, and that is what we aim to do through our music,” said Casey Schaefer, lead member of the Whizpops. “When children discover the power and beauty of nature, they learn to care for it.  Never has it been more important for us to reconnect ourselves and our children to the natural world.”

Giving dedicated fans a preview of the album, the Whizpops performed “Ranger Rick’s Trail Mix” this past Earth Day at Missoula’s Wilma Theater in Montana. The multi-genre album, interwoven with science-based educational tracks left both parents and children eager for the release of the new album. In conjunction with the national album release, the Whizpops are expected to perform in Seattle, WA at the Woodland Park Zoo and Northwest Folklife Festival, both events will sell copies of the newly released CD.

Ranger Rick magazines, which inspired the “Ranger Rick Trial Mix” album, has worked for 49 years to instill passion for nature and promote outdoor activity, while simultaneously inspiring a new generation of conservation stewards. The magazine provides regularly featured cartoon and fiction stories, environmental articles for the young reader, a number of recommended outdoor activities, and also educates readers on actions they can take to help preserve the natural world and its wildlife inhabitants.Ranger Rick Jr. and

“The Whizpops are thrilled about joining forces with Ranger Rick and the gang to bring exciting, educational songs for kids of all ages, we’re eager to hit the trail with him on this musical adventure,” said Schaefer.

Ranger Rick is to inspire in its readers a greater understanding of the natural world, a deep love of nature and wildlife, and a lifelong commitment to environmental stewardship.Ranger Rick. are the award-winning nature magazines for children published by the National Wildlife Federation, America’s largest conservation organization dedicated to protecting wildlife for our children’s future. Delighting kids for more than 49 years, the mission of Ranger Rick Jr and