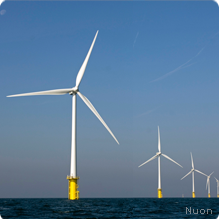 Uniondale, NY –The Long Island Power Authority (LIPA) announced today it is recommending development of New York’s first ever offshore wind farm. LIPA’s board will formally vote on the proposed contract at a meeting next Wednesday.

Slated to be the the largest in the nation, this 90-megawatt, 15-turbine offshore wind farm would be located far off the coast of Montauk, at the eastern end of Long Island. Deepwater Wind, one of the country’s leading offshore wind companies, would spearhead the project, which is estimated to be three times larger than the Block Island wind farm project slated to begin operation off the shores of Rhode Island later this year.

For over five years, local, state and national organizations along with communities up and down Long Island in partnership with labor, municipal leaders and businesses have been actively engaged in pushing LIPA to embrace offshore wind power. Today, they cheered this announcement as the necessary first step in a bold long-term large scale offshore wind program for New York. The project will produce enough energy to power about 50,000 Long Island homes by 2022.

The Long Island Power Authority is expected to formally approve the project at next week’s board meeting. LIPA and Deepwater Wind are expected to finalize all financial plans for the project by 2017.
In response to the announcement, a coalition of organizations provided the following comments:

“We applaud Governor Cuomo and the Long Island Power Authority for today’s historic announcement to move forward with New York’s first offshore wind project,” said Lisa Dix New York Senior Representative for the Sierra Club. “This announcement is the first step toward a bold long term, large scale offshore wind program for New York and catapults New York to the forefront of America’s clean energy economy. Today was the result of years of hard work by concerned citizens across the island and around the state that understand that offshore wind is essential to moving New York to a 100 percent clean energy future, while protecting our wildlife, environment and coastal communities from the devastating impacts of climate disruption.”

“Our transition from fossil fuels  to renewables has just took a giant leap forward with this historic decision,” Adrienne Esposito, Executive Director, Citizens Campaign for the Environment said. “This is game changer, a legacy that all New Yorkers will be proud of.   By tackling climate change head on New York is proving to be a global leader.”

"With LIPA's selection of offshore wind power, Long Island and the South Fork will get clean reliable power and New York State gets a head start building an offshore wind industry in this country,” Gordian Raacke, executive director, Renewable Energy Long Island said. “We commend Governor Cuomo and the LIPA Board for taking this big step forward in the transition to renewable energy sources and thank the environmental and advocacy community for their many years of effective work to bring offshore wind power to our shores."'

"Today marks a dramatic change in the way New Yorkers think about energy,” Lisa Tyson, Director, Long Island Progressive Coalition said. “Long Island organizations, grassroots activists, and devoted community members have fought tirelessly over the years to make offshore wind a reality for Long Island and now their day has come. This decision is a tremendous win for renewable energy, the climate, and the people."

"We applaud Gov. Cuomo and LIPA's leadership in taking this step to bring offshore wind to New York,” Bill Lipton, New York State Director, Working Families Party said. “Offshore wind power offers the possibility of thousands of good jobs around the state, and will help us ensure healthy communities and meet our state's climate commitments. This is a big first step toward building a thriving economy powered by 100 percent clean renewable energy that works for all New Yorkers."

"We applaud this huge step forward toward powering New York with clean energy and good local jobs. The growing renewables sector can and must benefit communities and workers," Matt Ryan, Executive Director of ALIGN said.

“This is what our clean energy future looks like. Greenlighting the nation’s largest—and New York’s first—offshore wind farm would be a giant step forward in finally unleashing the largely untapped potential of this plentiful source of clean energy,” Kit Kennedy from NRDC said. “Approving this project is critical to putting Governor Cuomo’s bold climate goals for the state into action.”
“Today’s news that LIPA will pursue the Deepwater Wind project is an important step on the road to a renewable energy future. New York has excellent offshore wind energy potential that must be tapped to help us achieve the Governor’s 50 percent renewable energy goal by 2030,” Anne Reynolds, of ACE NY said. “Offshore wind can help meet Long Island’s electricity needs with clean and homegrown power.

"Today's historic announcement is the culmination of so many years hard work from so many advocates,” George Povall, Director of All Our Energy said. “We are excited to honor their hard work and thank Governor Cuomo and the LIPA trustees for their forward thinking that moves Long Island into a future of climate protection with new economic opportunities for New Yorkers."

"It's long past time for New York and the country to embrace offshore wind power, and today's announcement of what will be the country's largest offshore wind farm is welcome news,” Alex Beauchamp, Northeast Region Director at Food & Water Watch said. “Now we must ensure that this project is the first step – not the final one – for offshore wind in New York,"

"Long Island is energy thirsty and transmission constrained, but is rich in ocean winds,” Rosanne Barone, Climate Change Campaign Organizer with NYPIRG said. “This is a landmark step for the region, the state and ultimately a critical move towards a society powered by renewable energy.”

"Offshore wind needs to be a significant part of the energy mix. It is key to putting the Empire State on a path toward an economy powered entirely by renewable energy,” Heather Leibowitz, Director, Environment New York said. “The 90-megawatts of energy produced off east Montauk will get us one step closer to this goal.”

“The is a big step for New York State to begin a real transition to a renewable economy,” Kim Fraczek Co-Director, Sane Energy Project said. “Governor Cuomo and LIPA's decision to begin an Offshore Wind manufacturing hub right here at home is a positive signal that we are creating the way for utility scale offshore wind in our near future."

“We are very excited to see the first offshore wind farm becoming a reality in New York State. This is a good beginning with more to follow,” Ling Tsou, Co-founder, United for Action said. “Thank you Governor Cuomo and everyone who have worked hard to advocate for this issue.”

"I am beyond excited to learn of Governor Cuomo's official support of a wind farm off the south fork of Long Island as it shows a real commitment to transitioning to a more renewable energy economy,” Shameika Hanson, Huntington Station, NYS Community Organizer for Mother's Out Front said. “I hope that he will ensure this be done as swiftly and justly as possible for our future and all the children whose futures are at stake the longer we wait to act on climate change."

“We would like to thank Governor Cuomo for advocating for offshore wind and leading New York to the future,” Alexis Smallwood, Rockaway Wildfire said.