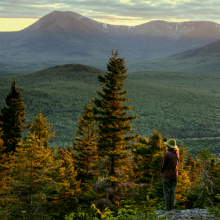 Collin O’Mara, president and chief executive officer of the National Wildlife Federation, had this to say:

“This new designation is a phenomenal way to celebrate the National Park Service centennial. By setting aside nearly 87,500 acres of public lands, the president is ensuring that Maine’s magnificent forests, mountains, and waterways will continue to be rich in biodiversity and safeguard these ecosystems. Wildlife in the region like moose, lynx, and loons are also big winners as they will now receive critical new protections that will ensure their long term survival.

Future generations of Americans will be very thankful to President Obama, the National Park Service, and philanthropist Roxanne Quimby’s foundation, Elliotsville Plantation, Inc., who generously donated the land. NWF’s Maine affiliate, the Natural Resources Council of Maine, also deserves big praise for its hard work towards making today’s announcement possible. The Katahdin Woods and Waters National Monument, combined with Maine’s other amazing public lands like Baxter State Park and Acadia National Park, will continue to provide amazing opportunities for outdoor recreation and habitats for wildlife for the next hundred years.”

In response, Lisa Pohlmann, the executive director of the Natural Resources Council of Maine, said:

“The new Katahdin Woods and Waters National Monument is a fabulous gift to the people of Maine and to the nation. This area of northern Maine contains a stunningly beautiful collection of mountains, forests, waters and wildlife. The Natural Resources Council of Maine is proud to have been part of this effort.”

Maine’s largest park, Acadia National Park, attracted nearly 3 million visitors last year and brought in an estimated $247.9 million for communities in the area. Originally designated by President Wilson in 1916, Acadia was the ninth most visited park in America in 2015.