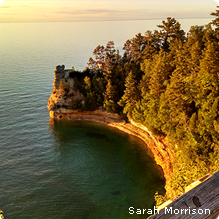 Sandusky, OH – As the presidential race nears the home stretch, Great Lakes advocates are gathering in Sandusky, Ohio, to press Hillary Clinton and Donald Trump campaign officials to explain their Great Lakes platforms. The gathering is part of the 12th Annual Great Lakes Restoration Conference, hosted by the Healing Our Waters-Great Lakes Coalition, which attracts hundreds of people from the states of Ohio, Michigan, Wisconsin, Minnesota, New York, Indiana, Illinois, and Pennsylvania.
Representatives from the Clinton and Trump campaigns will attend a campaign forum on Thursday, September 22.
At 9 a.m. Trump campaign representative Mike Budzik, past chief, Ohio Division of Wildlife under Ohio Gov. Bob Taft, will speak during the first 45-minute session.
At 11:10 a.m. Clinton campaign representative David Hayes, former deputy secretary, Department of Interior in Obama Administration, will speak during the second 45-minute session.
The Coalition will broadcast the sessions live on Facebook at https://www.facebook.com/healthylakes/
“Millions of people are counting on the next president of the United States to stand up for the Great Lakes,” said Todd Ambs, campaign director for the Healing Our Waters-Great Lakes Coalition. “We look forward to hearing from Clinton and Trump representatives to learn how they intend to tackle the ongoing serious threats to the Great Lakes. It will be imperative for the next president to embrace a strong Great Lakes restoration platform to protect the drinking water, health, jobs, and way of life for the millions of people who call this region home.”
Great Lakes advocates are looking to maintain momentum for federal efforts to restore the largest source of surface freshwater on the planet – one that provides drinking water to more than 30 million people – by securing commitments from both presidential contenders to maintain current restoration efforts into the next White House administration.
The conference, which runs September 20-22, comes days before the first presidential debate in New York. The Healing Our Waters-Great Lakes Coalition, chambers of commerce, mayors, and industry leaders from around the eight-state region recently called on Clinton and Trump to explain their positions on federal restoration efforts. The groups have issued a Great Lakes Protection and Restoration Presidential Platform, asking candidates to maintain funding for Great Lakes restoration programs, invest in drinking water and waste water infrastructure, and commit to tackling harmful algal blooms in the region to prevent disasters like the 2014 algal bloom that poisoned drinking water for more than 400,000 people in Greater Toledo for three days.
Presidential leadership has been essential to the progress being seen in communities across the region. In 2004, then-president George W. Bush led a region-wide effort involving more than 1,500 citizens from conservation organizations, the business community, academia, Tribes, and state and federal government to craft a plan to restore and protect the Great Lakes. In 2009, newly elected President Barack Obama launched the Great Lakes Restoration Initiative, a multi-year investment in the Great Lakes aimed at funding the region-wide strategy by confronting urgent problems such as invasive species, habitat destruction, toxic pollution and run-off from farms and cities.
The next president and U.S. Congress face tough budget choices. Ongoing budget negotiations over infrastructure, taxes, and healthcare could affect critical restoration efforts. Yet the drinking water problems in Flint, Mich., Toledo, Ohio, and communities across the region demonstrate why Great Lakes restoration must remain a budgetary priority.

Voters in Ohio, Michigan, Wisconsin, Minnesota, Indiana, Illinois, Pennsylvania and New York want the federal government to continue its investment to protect and restore the Great Lakes, according to a poll commissioned by the Healing Our Waters-Great Lakes Coalition. More than six in ten residents – 63 percent – strongly support continued funding.  Only 9 percent want to reduce federal funds for this purpose. Voters from across the political spectrum – Republicans, Democrats and Independents – support Great Lakes restoration work. The poll also found that voters would be less likely to vote for a presidential candidate promising cuts to federal restoration funds.
About the Great Lakes Restoration conference
The more than 300 people will be attending the Great Lakes restoration conference to hear from experts discussing current and emerging Great Lakes issues, including the threat of harmful algal blooms, environmental justice issues including developments in Flint, Mich., as well as successful restoration efforts in communities around the region. The conference also features field trips so that attendees can explore and see first-hand issues being discussed at the conference. Read the agenda.
Follow conference proceedings at http://conference.healthylakes.org/ and Detroit Public Television’s www.GreatLakesNow.org, as well as on Twitter by following @HealthyLakes. Plenary sessions will be broadcast live on Facebook https://www.facebook.com/healthylakes/.
Background on federal Great Lakes restoration efforts

Over the past seven years, the U.S. Congress and Obama Administration has invested more than $2.2 billion in more than 2,900 projects through the Great Lakes Restoration Initiative to clean up toxic pollution, restore fish and wildlife habitat, reduce runoff from cities and farms, and combat invasive species. A Brookings Institute study has confirmed how effective these funds are: every $1 investment in Great Lakes restoration leads to at least $2 in economic benefit in the form of increased fishing, tourism, and property values.
The Healing Our Waters – Great Lakes Coalition has chronicled more than 140 successful projects in Ohio, Pennsylvania, Michigan, Indiana, Illinois, New York, Wisconsin, and Minnesota.

The Healing Our Waters-Great Lakes Coalition consists of more than 140 environmental, conservation, outdoor recreation organizations, zoos, aquariums and museums representing millions of people, whose common goal is to restore and protect the Great Lakes. Learn more at www.healthylakes.org or follow us on Twitter @healthylakes.