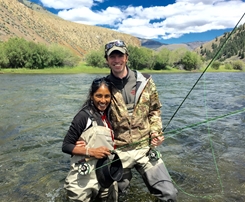 Today, National Hunting and Fishing Day, The National Wildlife Federation celebrates the critical contributions hunters and anglers have made to habitat conservation, species recovery and the U.S. economy.

Hunters and anglers have been at the forefront of America’s conservation efforts for more than 80 years, helping wildlife recovery, cleaning up our water, reserving lands for public benefit, improving wildlife science and supporting professional management to natural resources management. There are millions of acres of fish and wildlife management lands that have been protected through funding and hands-on work they have provided. During their days afield outdoors these men and women were alerted early and often to the damage unchecked exploitation of natural resources can have on human health, recreational opportunities, and the resource itself.

Sportsmen and women remain at the forefront of conservation today, leading efforts to restore more wildlife populations and habitats, protect our water and water bodies, keep our public lands public, and fund the agencies and biologists we ask to manage our natural resources sustainably. Over $10.5 billion has been contributed by sportsmen and women directly to wildlife and habitat management through a voluntary tax on hunting and fishing equipment, and they have added far more money to conservation through the sale of hunting and fishing licenses and other voluntary contributions.

Hunters and anglers also support communities large and small through the money they spend on gear, activities, and travel. This financial impact is particularly important to small rural communities for which hunting and fishing dollars area can be a sizeable segment of the local economy. The nearly 14 million hunters in the U.S. and over 40 million recreation shooters are estimated to support over $1.5 million jobs and nearly $110 billion in economic output.

“The National Wildlife Federation itself was begun largely by hunters and anglers who understood the massive scale of the threats to wildlife and our natural resources, said Collin O’Mara, President and CEO of the Federation, “a coordinated response was needed from a national organization comprised of state based affiliates. Hunters and anglers remain part of the heart and soul of our organization, and a driving force behind many of our wildlife conservation initiatives and successes, from clean water to resilient forests to healthier agricultural lands.”

National Public Lands Day is also celebrated today, a time to appreciate that over a quarter of our country is still available for all Americans to enjoy, to appreciate, and to benefit from in the form of cleaner water and air, natural resources like wildlife and wood, and unparalleled recreational opportunities. Hunters and anglers within National Wildlife Federation’s ranks are leading our charge to beat back efforts to take public lands away from the public by securing support for all national lands from elected officials from the local to the presidential level.

NWF thanks hunters and anglers for their countless contributions to conservation over the last century, and looks forward to their leadership in facing today’s and tomorrow’s conservation challenges.