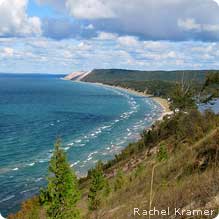 ANN ARBOR, MICH. – Business leaders today announced the formation of the Great Lakes Business Network, with a primary objective of decommissioning twin oil pipelines under the Straits of Mackinac.  The founding companies, which include Michigan breweries, food and tourism enterprises, as well as national outdoor retailer Patagonia, are highly concerned about the risks to their businesses and communities poised by the 63-year-old pipelines that were designed to last 50 years and are operated by the company responsible for the largest inland oil disaster in U.S. history in Kalamazoo, Mich.
“Enbridge’s oil disaster really hit home for me,” said Larry Bell, founder and CEO of Bell’s Brewery, Inc. “It was absolutely devastating for our community. I pledged to do all I can to not let that happen anywhere else in Michigan. For a company like Enbridge, which made more than $960 million in profits in the first quarter of 2016, an oil spill and the associated costs may be considered the cost of doing business. But I guarantee you that an oil spill in the Straits would be a disaster to Michigan’s local businesses up and down the Great Lakes shore and beyond.”
Founding members of the Great Lakes Business Network include Bar Fly in Grand Rapids Mich., Bell’s Brewery in Comstock, Mich., Beth Price Photography in Traverse City, Mich., Cherry Republic in Glen Arbor, Mich., Grand Rapids Brewing Co. in Grand Rapids, Mich., Hop Cat in Grand Rapids, Lake Charlevoix Brewing Co. in Charlevoix, Mich., Shepler’s Ferry in Mackinaw City, Mich., Sleeping Bear Surf & Kayak in Empire, Mich., and Patagonia in Ventura, Calif.
"At Patagonia, the protection and preservation of the environment isn’t just what we do after hours. It’s the reason we do business,” said Dan Sloboda of Patagonia. “Through grassroots activism we're committed to ensuring that public officials in Michigan—and across the country—take urgent action to protect freshwater everywhere."
Formation of the Great Lakes Business Network comes at an important time: The state of Michigan is assessing what to do about the pipeline, known as Line 5, and will be releasing two critical reports later in the year.
“This is a very important issue for businesses in this state,” said Chris Shepler, owner of Shepler’s Mackinac Island Ferry, which shuttles thousands of people every year to and from Mackinac Island. “My livelihood depends on clean water and a healthy Great Lakes. This pipeline threatens all of that.  That’s why it’s the top topic of conversation in Northern Michigan.”
Businesses around the state started to discuss what to do about the pipelines under the Straits of Mackinac following the Kalamazoo River disaster, whose $1 billion cleanup is still ongoing.
“Michigan’s business leaders have an important role to play in protecting our northern Michigan hospitality economy and our communities,” said Rich Bergmann, managing partner of the Lake Charlevoix Brewing Company, which uses Lake Michigan water for its beer. “I am also very concerned with the threat to our drinking water. We have to do everything in our power to protect our communities from an oil spill that could harm our drinking water, jobs, and quality of life.”
A University of Michigan study concluded more than 700 miles of shoreline and over 17,000 square miles of open water are potentially at risk, including iconic tourism destinations like Mackinac Island, from an oil spill.
“The continued operation of aging oil pipelines under the Great Lakes does not make sense,” said Beryl Skrocki, owner of Sleeping Bear Surf & Kayak, a local outdoor outfitter in the Sleeping Bear Sand Dunes on northern Lake Michigan. “The risks far outweigh the benefit, and it’s time to pull the plug before Michigan experiences another oil spill disaster.”
The National Wildlife Federation and Groundwork Center for Resilient Communities are the acting fiscal agents and organizers for the Great Lakes Business Network, working in collaboration with the Michigan League of Conservation Voters.
“We are pleased to be working with business leaders in Michigan to protect our Great Lakes, communities, drinking water, jobs, wildlife, and quality of life,” said Mike Shriberg, regional executive director for the National Wildlife Federation’s Great Lakes office. “Oil pipelines under the Great Lakes pose a serious, urgent threat. But working together we can put in place solutions that benefit all of our state’s citizens now and for generations to come.”
“The business leaders in this network will help make the business case for decommissioning this risky pipeline to our state leaders,” said Jim Lively, program director at Groundwork Center for Resilient Communities. “These pipelines are essentially a shortcut for western Canadian oil heading to refineries in Sarnia, Ontario, sticking Michigan businesses and residents with the risk for Canadian profit.”