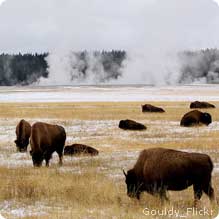 Gov. Steve Bullock Stops the Slaughter of 40 Bison, but Life-Saving Quarantine Program Could Save Many More

DENVER – Montana Governor Steve Bullock has ordered a reprieve for 40 Yellowstone bison that have been in quarantine since last February. These bison have been awaiting a determination by the National Park Service on whether they could be transferred to the Fort Peck Reservation for a quarantine and relocation program.
While conservation and Tribal groups are pleased with the reprieve for the 40 bison, they are calling for approval of Yellowstone National Park’s previously proposed 2016 plan that would have sent many more bison through quarantine facilities and onto conservation lands rather than to slaughterhouses.

“While we welcome the Governor’s temporary reprieve, I’m disappointed that the process seems to have stalled. This is a tragedy on many levels. The Tribes of Fort Peck Reservation have spent a tremendous amount of resources to prepare to receive these bison. It’s difficult to accept that our generosity has been rejected for no legitimate reason. And it’s a tragedy for those bison which will likely be slaughtered now instead of helping grow conservation herds for our tribes and the American public. We’re still prepared to meet any requirements to do this, but it appears the National Park Service has closed the door on us.”

“Between 2012 and 2014, nearly 200 Yellowstone bison were successfully restored to the Fort Peck Reservation without a hitch. Fears of disease, escapes, or competition with livestock were all proven unfounded. Quarantine and relocation worked. Governor Bullock’s announcement to explore the options for the 40 bison held since last year offers hope, but we are very concerned that there doesn’t seem to be any intention to identify long-term ways to save more Yellowstone buffalo by allowing them to be relocated to tribal lands and other conservation herds. Fort Peck can certainly hold more than the 40 bison being considered.”

“This is a good first step to stopping the slaughter of our national mammal. But this letter does not change the National Park Service’s apparent rejection of the Fort Peck quarantine alternative. That alternative is a real win-win solution to the decades-long bison conflict, but instead the Park Service is caving to the unreasonable demands of the Montana livestock industry. Polls show an overwhelming number of Montanans want to see bison restored to tribal lands in the state. If the people want it to happen, they need to demand that all their leaders work to find solutions to problems like the ship-to-slaughter program. Ship-to-slaughter is an incredible waste of our national mammal, and the National Park Service needs to solve this problem rather than perpetuate it.”

“Fort Peck Tribes have demonstrated tremendous leadership in establishing the only dedicated facility available for quarantine of Yellowstone bison anywhere. It is deeply concerning that after a multi-year public process in which nearly 400,000 Americans supported quarantine at Fort Peck, the National Park Service is still not willing to issue a record of decision (ROD) in favor of their Environmental Assessment's preferred alternative. Issuing the ROD would provide a catalyst for resolving how Yellowstone bison can be sent to quarantine and contribute to the well-being of the tribal community without harming the Montana Livestock Industry or the state's brucellosis-free status.”

Yellowstone is the only place in the United States where bison have lived continuously since prehistoric times. Yellowstone bison are exceptional because they comprise the nation’s largest wild bison population and are among the few bison herds that have not been hybridized through interbreeding with cattle. They are critical to the restoration of the species.

Since the mid-1990s, Montana’s Board of Livestock has insisted upon a now discredited strategy of keeping wild bison outside of Montana to reduce the spread of the bacterial disease brucellosis to livestock. However, every single case of brucellosis transmission from wildlife to cattle in Montana, Wyoming and Idaho over the past several years has been traced to elk, not bison. There's been no known instance where bison have transmitted brucellosis to cattle. As part of an agreement reached in the 1990s between Montana and the National Park Service, the park herds are to be limited to 3,500 animals. The current population is 5,000, which is still below the ecological carrying capacity, but in excess of the legal agreement. Population control for Yellowstone bison includes hunting if the bison leave Yellowstone National Park’s boundaries and the ship-to-slaughter program, which involves capturing bison and sending them to be slaughtered.

The National Park Service initiated a planning process in 2014 to consider a programmatic bison quarantine and relocation program. The purpose would be to establish or augment tribal and public populations of plains bison to assist in the conservation of the species as wildlife, support the culture of Native Americans, and reduce the number of Yellowstone bison sent to slaughterhouses. A draft plan was released on Jan. 13, 2016 with a preferred alternative to collaborate with Fort Peck Reservation as the bison quarantine facility site. More than 300,000 people commented in support of this alternative by the Feb. 29, 2016 deadline. A final decision is long overdue. Over 99,326 people have contacted the National Park Service since December 2016 requesting final approval of this plan. However, it is now apparent that the NPS regional director will not sign the plan, and the NPS will maintain the existing program which sends all captured bison to slaughter regardless of their brucellosis status.

State livestock officials opposed the National Park Service plan due to concerns over potential brucellosis transmission from bison to cattle, even though the plan includes a full quarantine process at the Fort Peck Reservation to ensure all released bison are disease free and pose no risk to the livestock industry. Once confirmed brucellosis-free, these bison would have been reintroduced to Fort Peck and other qualified bison conservation efforts.

Caught in the middle of the drafting of this plan is a group of 40 bison. Since February 2016, these bison have been held in quarantine at Yellowstone to determine if they have brucellosis. With the NPS quarantine and relocation plan, these bison were supposed to finish their quarantine period at Fort Peck Reservation, then be released onto tribal lands once declared brucellosis-free. But because of NPS’s faltering with their proposed 2016 plan, these bison were almost certainly destined for slaughter. Governor Bullock called upon a 2011 executive order, which prohibits the transportation of animals onto or off of Montana Department of Interior-managed lands like Yellowstone, to halt the slaughter of all Yellowstone bison until a temporary facility is found to house the 40 bison. While his letter provides a temporary reprieve, there is no reference in the letter to how long this respite will last or what will happen to these 40 bison after they reach this interim location. Also, once the 40 bison are removed, additional bison can be rounded up to be shipped to slaughter.

The Tribes of Fort Peck and Fort Belknap Reservations have long offered to accept surplus Yellowstone bison for restoration on tribal lands. Defenders of Wildlife, National Wildlife Federation and World Wildlife Fund worked with these Tribes in 2012 and 2014 to bring Yellowstone bison from quarantine facilities to the two reservations to complete their quarantine process and restore conservation herds. Those herds now total over 300 animals. A lawsuit brought by livestock interests to stop the transfer of bison to Fort Belknap was unanimously rejected by Montana’s Supreme Court in 2013. Additionally, a poll commissioned by Defenders of Wildlife in 2015 found that nearly eight in ten Montana voters support restoring wild bison populations on tribal lands (78% support).

Defenders of Wildlife is dedicated to the protection of all native animals and plants in their natural communities. With more than 1.2 million members and activists, Defenders of Wildlife is a leading advocate for innovative solutions to safeguard our wildlife heritage for generations to come. For more information, visit www.defenders.org  and follow us on Twitter @DefendersNews.

WWF is one of the world’s leading conservation organizations, working in 100 countries for over half a century. With the support of almost 5 million members worldwide, WWF is dedicated to delivering science-based solutions to preserve the diversity and abundance of life on Earth, halt the degradation of the environment and combat climate change. Visit www.worldwildlife.org to learn more and follow our news conversations on Twitter @World_Wildlife.