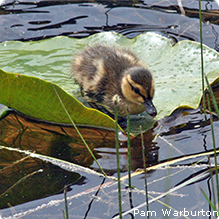 The Trump Administration is undermining the Clean Water Act. American sportsmen and sportswomen call on the Administration to protect headwater streams and valuable wetlands, keystones of America’s clean water and hunting and fishing heritage

Does America need cleaner waterways? Or do we want to forsake decades of progress and allow degradation of our streams, rivers and wetlands? Those are the vital questions for the new Trump Administration and the 115th Congress.

American sportsmen and women want to move forward, not backward.

Yet, today, President Trump signed an executive order to start rolling back the Clean Water Rule, a new definition issued in 2015 to clarify what are “waters of the United States.” The legally sound and scientifically supported definition would ensure protection for headwater streams and wetlands.

The Trump administration Executive Order directs the Army Corps of Engineers and the EPA to rescind and revise the Clean Water Rule. It directs the agencies to consider using former Supreme Court Justice Antonin Scalia’s minority opinion that said seasonal streams and many wetlands do not merit protection as a basis for the revision.

If Justice Scalia’s direction is followed 60 percent of U.S. streams and 20 million acres of wetlands would lose protection of the Clean Water Act; a tragedy for fish and wildlife, hunting and fishing, and clean water.

President Trump’s reliance on Justice Scalia’s opinion is especially misguided and must be reversed. The Trump Administration must consider the benefits of the 2015 Clean Water Rule and make sure that any revised rule does the following:

• Restores longstanding protections for millions of wetlands and headwater streams that contribute to the drinking water of one in three Americans, protects communities from flooding, and provides essential fish and wildlife habitat that supports a robust outdoor recreation economy.
• Sustains the sport fishing industry, which accounts for 828,000 jobs, nearly $50 billion annually in retail sales, and an economic impact of about $115 billion every year that relies on access to clean water.

• Sustains duck hunting in the U.S., including 1.5 million duck hunters whose expenditures invest more than $3 billion into our economy.

• Fulfills the aspirations of 83 percent of American sportsmen and women, from across the political spectrum, who believe the Clean Water Act should apply to smaller streams and wetlands, as the 2015 rule directed.

The new Administration must listen to the voices of American sportsmen who want more clean water, more fish and wildlife habitat, and new progress building on the successes of the past.

Sportsmen and women will do everything within their power to compel the Administration to change course and to use the Clean Water Act to improve, not worsen, the Nation’s waterways.