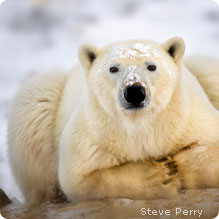 WASHINGTON D.C. — Today, President Donald Trump signed an executive order aimed at dismantling the Clean Power Plan and canceling the nation’s Climate Action Plan, thereby beginning the process of eliminating industrial carbon pollution limits and stopping the evaluation of projects for their impacts on our changing climate. The executive order will be challenged legally because it undermines the Supreme Court’s Massachusetts vs. EPA decision, which ruled that the government has a duty to limit climate pollution under the Clean Air Act assuming an endangerment finding, which was issued in 2009, upheld by the Supreme Court in 2012, and served as the basis of the carbon pollution limits for new and existing power plants. The Executive Order also lifts a moratorium on federal coal leasing and targets methane standards for the oil and gas industry, among other climate policies, which are desperately needed to recover wildlife populations in a rapidly changing world.

“Climate change threatens our health, our communities, our wildlife, and our natural resources. At the same time, the solutions represent the greatest market opportunity of the 21st Century. Our nation faces a choice: Do we want to responsibly seize the multitrillion dollar global clean energy market or do we want to cede leadership and millions of innovation and manufacturing jobs to China? Right now, America’s clean energy sector is one of the fastest growing segments of our economy, supporting hundreds of thousands of jobs and attracting hundreds of billions of dollars of private investment. Today’s Order jeopardizes these American jobs and domestic investment, and undermines the future of wildlife.

“The science is clear: we must reduce industrial carbon pollution if we want to stave off worsening climate impacts. The most effective way to do so is for Congress to put a price on carbon pollution, which would unleash market forces that will catalyze innovation and spur domestic job creation. However in the absence of Congressional action, the Clean Power Plan and oil and gas methane limits are sensible, affordable, and legally required actions that will reduce pollution, help wildlife, and create jobs. We are deeply disappointed in the administration’s Executive Order seeking to dismantle the Clean Power Plan, a thoughtful, legally sound, and flexible policy to reduce carbon pollution, spur job creation and help wildlife. Further, the decision to resume the federal coal leasing — before reforming submarket leasing prices and without ensuring that degraded mining sites will be reclaimed — will continue to shortchange taxpayers and local communities by continuing loopholes and subsidies that allow more pollution and harm important wildlife habitat for iconic species like pronghorn, mule deer, elk, and sage grouse.

NWF Fact Sheet: Understanding the Clean Power Plan
The Clean Power Plan is a flexible program under the Clean Air Act to regulate harmful carbon pollution from power plants.
Authority for EPA to regulate carbon under the Clean Air Act is backed by two Supreme Court rulings.
The Clean Power Plan provides a host of benefits to people and wildlife beyond helping to avert climate disruption.
The CPP has public health and climate benefits worth an estimated $34 billion to $54 billion, far exceeding the costs.
NWF Blog: 4 Things You Need To Know About The Clean Power Plan
NWF Blog: Moving Away From Coal To Help Wildlife
NWF Fact Sheet: Addressing Oil and Gas Methane Pollution on Tribal and Public Lands: Threats and Opportunities
NWF will also be posting a new blog detailing the other policy components of today’s Executive Order. Further, the National Wildlife Federation has issued a series of detailed reports on how climate change and carbon pollution are hurting America’s wildlife and outdoor heritage: