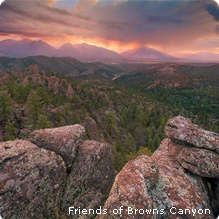 WASHINGTON – The executive order directing a reassessment of national monuments established during the last 21 years could result in the loss of protections for wildlife, significant historic and archaeological sites and the undermining of a public-lands legacy that is fundamental to our identity and way of life.

Collin O’Mara, the National Wildlife Federation’s president and CEO, commented today on the administration’s order that requires the Interior Department to determine whether the Antiquities Act was properly used to designate national monuments dating to 1996 and recommend any changes:

“Throughout the campaign, President Trump committed to keeping America's public lands public and to fulfilling the legacy of Theodore Roosevelt.  The executive order to re-evaluate several of the monuments designated under Theodore Roosevelt's Antiquities Act in the last 21 years has the potential to reduce public access to some of the most important places in our nation.  Under the order, the review of Bears Ears would be fast-tracked, which is in stark contrast to the collaborative decision to designate it as a monument. There were calls for decades to protect the stunning red-rock country. A coalition of tribes with ancestral ties to the area formed more than six years ago to advocate for saving more than100,000 cultural and archaeological sites, some dating to 11,000 B.C.

“President Roosevelt asked Congress to pass the Antiquities Act to protect remarkable places like Bears Ears, Rio Grande del Norte in New Mexico and Papahānaumokuākea in Hawaii. They and the other monuments now under scrutiny are outstanding examples of what we as a nation gain from conserving these areas. Important fish and wildlife habitat stays intact, hunting, fishing and recreation opportunities are maintained and irreplaceable historic and natural treasures remain part of our national heritage. Nearly a quarter of our national parks, including the Grand Canyon, Acadia, Zion and Olympia, started as national monuments. Monuments and other public lands help drive a growing outdoor recreation economy that the Outdoor Industry Association says generates $887 billion in consumer spending annually and supports 7.6 million jobs.

“Rather than trying to shrink or eliminate national monuments that Americans cherish and undermine our public-lands legacy, let’s work on improving the management of our public lands and make sure our parks, monuments and refuges are adequately funded.”

Here are comments from state affiliates and partners of the National Wildlife Federation:

“Established in August 2016, the Katahdin Woods and Waters National Monument has already welcomed thousands of visitors to view its spectacular forests, rivers and wildlife. Businesses in nearby communities have seen an uptick in economic activity, real estate sales have increased after years of stagnation, and new investments are taking place in the region. New jobs have been created and there is a palpable sense of hope and optimism in a region that has struggled for years as the paper mills declined and closed.” ~ Cathy Johnson, Forests and Wildlife Director of the Natural Resources Council of Maine.

"Today's executive order to review national monuments designated in the last 21 years is an attack on our public lands and who we are as Americans. In New Mexico, hunters, anglers, business owners, ranchers, and more leaders in the local communities worked for years to protect Organ Mountains Desert Peaks and Rio Grande del Norte and get them designated as national monuments. The executive order released today goes against the wishes of the American public, and could set a dangerous precedent for our public lands across the country." ~ Garrett Vene Klasen, New Mexico Wildlife Federation executive director

“The Reconstruction Era National Monument in South Carolina tells the compelling and often inspirational story of Reconstruction following the Civil War. There was overwhelming local support for the monument and it will prove an economic boon for Beaufort County. The monument beautifully fills a void in our national story because there are so few permanently protected buildings and grounds reflecting on the Reconstruction Era.  It is a great example of why the Antiquities Act exists and why it should not be tampered with.” ~ Ben Gregg, South Carolina Wildlife Federation

“Coloradans worked for more than 20 years to protect Browns Canyon. Republican and Democratic lawmakers, ranchers, sportsmen and women, business owners and hikers supported it. Still, we couldn’t get it over the finish line in Congress. Finally, the Antiquities Act was used in 2015 to establish the monument, which is one of the country’s premier whitewater rafting destinations. It has a Gold Medal trout fishery on the upper Arkansas River andimportant habitat for bighorn sheep, deer, elk and raptors. Places like Browns Canyon are exactly what the Antiquities Act was created for and will stand for generations as a great example of the law’s value.” ~ Suzanne O’Neill, Colorado Wildlife Federation executive director
"John F. Kennedy understood the importance of ocean conservation over 55 years ago. In his comments at the Australian Dinner for the America's Cup Crew on Sept. 14, 1962 in Newport, Rhode Island, he said: "We are tied to the ocean. And when we go back to the sea, whether it is to sail or to watch it we are going back from whence we came..." There is a direct correlation between the health of the ocean and the health of the planet. Efforts such as the designation of New England Coral Canyons and Seamounts Marine National Monument help ensure the wellness of our planet and its people now and in the future." ~ Anne DiMonti, Director, Environmental Education Center, Audubon Society of Rhode Island

Read more about the importance of our national monuments:
National Monuments Fundamental to Roosevelt’s Playbook for Public Lands