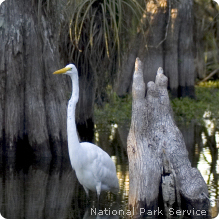 Earthjustice filed a legal challenge today to compel the U.S. Army Corps of Engineers to comply with federal environmental laws in establishing proper water management for the one of America’s most significant river systems– the Apalachicola, Chattahoochee and Flint Rivers in Florida, Georgia and Alabama.

Earthjustice is representing the National Wildlife Federation, the Florida Wildlife Federation, and the Apalachicola Riverkeeper in the federal suit filed in the U.S. District Court for the District of Columbia. The lawsuit shows that the U.S. Army Corps of Engineers failed to properly protect the environment when it developed a water management plan that will guide freshwater flows through the Apalachicola-Chattahoochee-Flint River system for decades to come.  The lawsuit further points out that the Corps’ plan, and the environmental impact statement used to develop that plan, violate several federal environmental laws:  the National Environmental Policy Act, the Water Resources Development Act, and the Fish and Wildlife Coordination Act. The suit asks the Court to order the U.S. Army Corps of Engineers to re-do the water management plan and environmental impact statement to comply with federal environmental laws.

“The bottom line is that the Army Corps is failing to protect one of the most significant ecosystems in the Western Hemisphere,” said Melissa Samet, Senior Water Resources Counsel for the National Wildlife Federation. “We have the ability and the responsibility to save this amazing treasure and the vast array of fish and wildlife that rely on it.  The Army Corps can lead the way, but only if they comply with the law.”

Among other things, the Army Corps failed to conduct a sufficient Environmental Impact Statement when it considered a new water management regime for the rivers, and failed to create a plan to mitigate damaging impacts to fish and wildlife, as required by federal law. The Corps also failed to develop a plan that advances fish and wildlife conservation, which violates the Fish and Wildlife Coordination Act. The Corps’ plan would further starve the Apalachicola ecosystem of vital freshwater flows, including during the critical breeding, spawning, and flowering seasons for many species.

“The Army Corps’ mismanagement continues to threaten the livelihoods of thousands of Floridians as well as the Apalachicola River and Bay - an ecosystem of international significance that supports fisheries worth billions of dollars to Florida,” said Apalachicola Riverkeeper Dan Tonsmeire. “Federal regulators need to address the ecological issues that are affecting communities in our three states. With this lawsuit, we hope to restore a level playing field that considers the ecosystem functions that are critical to meet the human needs for all involved.”

Manley Fuller, President and CEO of the Florida Wildlife Federation, says his group met with officials from the U.S. Army Corps and urged the Corps to follow the recommendations of experts at the U.S. Fish and Wildlife Service to make sure the needs of fish and wildlife in the river basin were properly included in the new water management plan, but the Corps did not provide adequate protection.

“Since the Corps didn’t include adequate protections for fish and wildlife habitats, we were compelled to file this action on behalf of the ecosystem as a whole," Fuller said.

“The Corps wrongly concluded that its plan would have little to no adverse impact on the Apalachicola ecosystem – a finding that is both legally indefensible and factually unsupportable,” Galloni said.  “It is directly contradicted by an extensive body of factual and scientific evidence presented to the Corps during the public comment periods.”

As the conservation groups’ legal complaint states, the Corps’ new Water Control Manual will dramatically increase upstream withdrawals and severely restrict downstream releases. The Corps would increase the frequency of “drought operations” (when the Corps holds back more water) by 600% and triple the amount of time that those restrictive operations are in place.  “That is devastating to fish and wildlife, and to the families who depend on these natural resources,” Galloni said.

“A whole way of life in the seafood industry is being pulled apart before our eyes. It’s a heartless allocation that unnecessarily hurts Florida,” said Apalachicola Riverkeeper Dan Tonsmeire. “The problems can be addressed with good decisions based on the best available science and with leadership. This is reversible. The ecosystem can come back if our leaders manage the river as Congress has directed and in a way that doesn’t favor some interests over others.  The Corps has to advance out of a 1950s approach to managing water resources.”