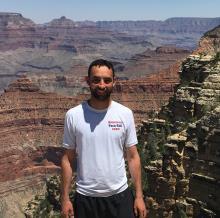 RESTON, VA – This weekend, the National Wildlife Federation recognized David Calandro, a recent college graduate who serves on the board of the Missouri Conservation Federation from Joplin, Missouri as its National Conservation Youth Leader of the Year.

“David is a special young man. He is passionate about the outdoors and wildlife conservation, and embodies the qualities we are looking for in leaders of tomorrow,” said Brandon Butler, Executive Director of the Conservation Federation of Missouri. “We are very proud to have David on our Board of Directors and appreciate his efforts to inspire the next generation of wildlife leaders.”

David Calandro recently graduated from the University of Missouri-Columbia with a double major in forestry and fisheries & wildlife and completed six years of service with the Army National Guard as a helicopter mechanic. Throughout his time in school, David was actively involved in The Wildlife Society, the Fisheries and Aquatic Sciences Society, Forestry Club, the Society of American Foresters, and served as the student body president of the School of Natural Resources for two years. Currently, David works as a wildlife technician for the United States Department of Agriculture, Wildlife Services in Southeast Missouri, protecting Mead’s milkweed and Hine’s emerald dragonfly habitat from feral swine. David is an alumni of Conservation Federation of Missouri’s (CFM) youth education program, the Conservation Leadership Corps, and now serves on the organization’s board of directors. David has given countless hours to inspiring other young people to get involved in conservation efforts, organizing volunteer projects, and serving as a peer mentor. His passion for nature extends far beyond the classroom or workplace. David grew up spending time in the outdoors, and enjoys kayaking, fishing, biking, sailing, camping, hunting, and hiking. With both an energy and dedication for conservation, David is already making a real difference and leaving a lasting impact on others.