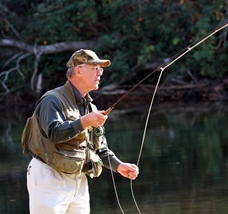 "Everyone who loves North Carolina’s woods and waters should be grateful for the lifetime work of Richard Mode,” said Collin O’Mara, president and CEO of the National Wildlife Federation. “For the past half century, Richard has worked tirelessly to mobilize hunters and anglers to protect rivers, defend public lands, and advocate for effective air and water protections. He’s one of America’s great conservationists and I’m proud to call him a friend.”

“A love of the outdoors permeates everything Richard does,” said Tim Gestwicki, Chief Executive Officer of the North Carolina Wildlife Federation. “Richard’s work to protect clean water, preserve trout habitat, and defend our public forests has had real benefits for fish and wildlife. Driving these successes is Richard’s passion and positive, collaborative spirit that leaves a lasting impact on everyone around him.”

An unwavering commitment to the conservation of our natural resources is what has driven Richard Mode to spend the last three decades mobilizing other outdoor enthusiasts into a powerful force that has impacted local, state, and federal resource management decisions and legislation. As a board member of the North Carolina Wildlife Federation (NCWF), past president and board chair of Trout Unlimited (TU), and founder of the local TU chapter, he has dedicated his life to advocating for strong conservation policies, organizing networks, and growing and developing organizations. Richard has served for over two decades as the affiliate representative to the National Wildlife Federation (NWF) with a collaborative spirit and a positive attitude that leaves a lasting impact on others. Richard’s work on clean water, high-quality trout habitat, and vibrant forests has made a measurable impact on the wildlife resources of the Southeast. Through his years with NCWF, TU, and NWF, Richard has been heavily involved in fights to save rivers and overhaul hydropower management decisions so they account for wildlife and fishery resources, minimizing the impacts of timber and mining operations on fish and wildlife by federal and state agencies, defending public lands, and advocating for effective air and water quality legislation. He has spearheaded efforts to engage the agriculture and forestry communities on wildlife and habitat issues related to climate change, including longleaf pine restoration, biomass, early succession habitat management, and carbon sequestration. Richard’s chief goal has always been to bring hunters, anglers, and wildlife enthusiasts to the public policy arena to protect the special places and wildlife resources in America. He believes the passion, ethics, and knowledge that hunters, fishermen, and wildlife enthusiasts bring to the table is a necessary ingredient to making good policy decisions. Richard’s decades-long support of NCWF and NWF initiatives is unwavering. The only dedication that trumps this commitment is to his family. Richard is an immense inspiration to his children and grandchildren – his “grand girls” – and they no doubt have developed their love of the outdoors through him.